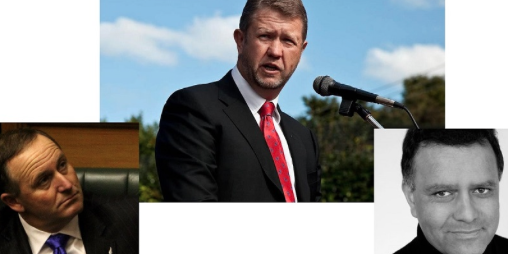 On Radio NZ’s “Nine To Noon” programme, ex-Labour Party president, Mike Williams described the appointment of veteran political campaigner, Matt McCarten, as “either an act of lunacy or a stroke of brilliance“.

This blogger opts for the latter – this was a strategic master-stroke by Cunliffe and the Labour Party hierarchy. In one move, Cunliffe has;

It is hard to see who could have filled this role any better.

Judging by comments from National’s leader, John Key, the appointment has struck a raw nerve. Key is obviously worried, as his comments across the media clearly suggest,

“The reality is that Matt McCarten comes from the hard left, he’s been deeply involved with the Unite Union…”

“They’ve taken a long time to get their press team together, they’ve gone through now a couple of chiefs of staff, their caucus is not at all united, it’s very divided, and I think they’re going to struggle to keep control of that caucus.”

David Cunliffe was put into his job by the unions and this is the unions getting an even tighter grip on the direction of the Labour Party.

I really don’t think he’ll have a dog show of unifying the Labour Party.”

Key is most definitely worried. If he wasn’t, he would have shrugged his shoulders at media questions and dismissed the issue as trivial and none of his concern.

When Matt McCarten was an organiser for the Alliance Party in the 1990s, he achieved the near impossible; taking a relatively new political movement from two to 13 Members of Parliament in the first MMP election in 1996.

No wonder the Nats are worried. And no wonder right-wing zealots on Kiwiblog and elsewhere are staining their underwear in anxiety. They fully understand the implications of Matt’s  new role and influence in this year’s election. This is a serious  (excuse the cliche) game-changer.

But more than winning the election, Matt’s appointment indicates that Labour is no longer wedded to the neo-liberal policies of the last 30 years – policies which even Helen Clark only tinkered with around the edges, such as reforming the Employment Contracts Act into the Employment Relations Act.

It also sends a clear, unequivocal signal to any remaining “ABC” elements within the Labour Parliamentary caucus – do not mess with the Leader.  As our American cuzzies like to phrase it, “Matt’s got his back”.

TV1: Key tips Labour to go ‘careering to the left’