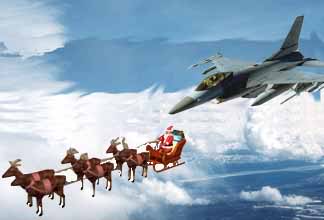 Latest news on TV One had pictures of Santa’s improbable entourage being escorted by US Airforce jet fighters at an undisclosed location inside the Arctic Circle. It doesn’t take Edward Snowden to figure out the Americans are using cherished icons like Saint Nicholas as a geopolitical tool. This hijacking of Santa doesn’t appear to be warranted by any action on the part of Santa at least. There was no indication of smuggling, labour violations etc. usually associated with popular speculation around his operation, indeed the stated reason was to assist Santa. Oh, sure. Assisting deliveries with a pair of F16s. No Hercs or transports, these were fighters – I know what I saw in the image. What is that assisting exactly? The US is making a play for Santa and who is to stop them making whatever claim they want? The implication is that Al Qaeda or some sort of threat may attack Santa, but the language in the reports were vague.

Since when did Santa’s routine annual trekking suddenly become a security issue? If the US authorities were turning a blind eye not any more, he is a propaganda weapon now. This is assistance whether you like it or not. I don’t think an entity like that would call for it or need it, but nevertheless the American’s have asserted physical as well as cultural ownership when they doctor up images of a compliant Santa flanked by the boys from Top Gun. Santa ideology and iconography has been dragged into what is a confrontation between Russia and the US over Arctic resources on the face of it, but the audacity of the mythological imposition is global.

Santa is the repaganised Nicholas and theoretically international. The Americans consider Santa to be a European demi-god that came with them from Europe where he is worshipped in much the same way, but notably accompanied with negro slaves instead of the generic dwarfs of the Anglo-American version. The television networks of the Anglosphere however make sure children understand that Santa is unquestionably a friend of America and the West, and is a missionary of consumerism to the heathen nations. Christianity and the baby Jesus is in no way connected to the pervasive cult of Santa, which is the defining characteristic of Christmas to the masses. It is a secular affair. Any thought to bring Christ or Christianity into Christmas in the public realm in the Angloverse is considered the height of bad manners, a mood kill, pointless.

This revelation on tonight’s news is a statement of Western appropriation over what is an Eastern tradition. Turkish becomes Scandanavian via Hollywood. And you can guarantee the hegemony won’t stop there. The north pole confrontation is just the start.

An escort through China’s self-declared air defence identification zone in the East China Sea as part of the force projection will be next. Just so they can add Santa to the list of aircraft that don’t recognise China’s territorial claims. Santa would never travel that way? Well he will now he has American air cover. All up everywhere (except Gaza because the Israelis would say no exceptions and everyone knows they would not hesitate to kill Santa and all the reindeer). Drones down every chimney to help Santa out. Figuring out whose been naughty and nice. Would Santa have any sort of work satisfaction anymore under these conditions, used as a puppet for foreign power plays? All the natural jolliness in the snow would be gone, to be replaced by PR stunts and CIA supplied cocaine.

Santa has lost his assumed neutrality that has allowed him free access across borders for so long by convention alone. If the Americans are asserting the sort of meta IP ownership that has them claiming military escorts then that’s the brand gone. That’s the end of the world franchise right there. That’s the Nobel Peace Prize down the shitter for old Santa. If It’s just Captain America in a Santa suit then that’s not really our concept of Father Christmas.