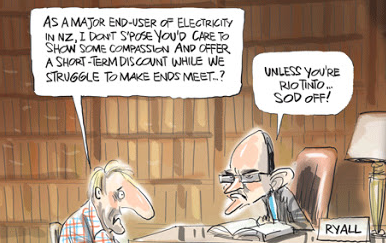 Recently, EMA CEO, Kim Campbell, issued a media statement condemning the current high power prices and promises of a “price freeze” by Mighty River Power as inadequate. Campbell’s own words were that the so-called price freeze is  “simply not enough”.

By the way, I refer to MRP’s price freeze as “so called” because, as CEO,  Doug Heffernan stated,

“We are now confirming that for our customers there will be no increase in our energy prices for a further 15 months. However, there will likely be changes in customer pricing from April 1 due to variables over which we have no control that we pass through on our bills – such as transmission and distribution charges and any increases in metering costs due to regulatory requirements.”

Unfortunately, the Employers and Manufacturers Association – whilst calling for a drop in power prices – offers nothing constructive in making it happen.

Indeed, in May 2013, soon after the combined LabourGreen announcement on the creation of a single-buyer desk called NZ Power, the EMA (and others) roundly condemned the move.

The EMA was a co-signatory to an open letter  on 2 May, from BusinessNZ and the heads of several chambers of commerce. The letter said, that the policy would harm jobs, growth and investment, causing interest rates to rise, reducing KiwiSaver retirement savings and making people less well off (source).

“More price competition – rather than damaging price controls – is needed to drive down electricity prices.”

Well, that “price competition” has worked so amazingly well that seven and a half months later, on 16 December, one of the signatories to that letter condemning NZ Power wrote,

With power supply clearly outstripping demand, electricity prices are now too high and should come down, the Employers and Manufacturers Association says.

“Demand for power is well below the country’s generation capacity and its price should reduce to help stimulate New Zealand’s economic recovery and offset inflationary pressures forecast in other parts of the economy.

“At present projections the savings available to business and residential consumers would be at least $67 million a year, but we suspect it could be much more.

“Stating as Mighty River Power has, that they will not increase the electricity price for three years is simply not enough.

“The Major Electricity Users Group notes the futures price for wholesale power for the year from 1st April 2014 is 7.14 c/kWh, down 0.17 c/kWh for the year. In a competitive market this reduction would be reflected in wholesale costs which would be passed through to retail customers.

“MEUG calculates that an average household using 8,000 kWh per year would save at least $13.80 per year or $23 million for all households.

“For all businesses and residences the potential cost reductions amount to $67 million in 2014/15.

“To maximise competitiveness our electricity market structures need to ensure the lowest possible power price while signalling the right time to invest in future generation and transmission.

Unfortunately, Campbell then shoots himself in the proverbial foot by adding,

“The Labour/Greens electricity proposal to underprice our existing power assets is no answer.

“To spur on market competition businesses should seek out the best power deals at www.whatsmynumber.org.nz/mybusiness“

As I said, hasn’t that worked out well?!

So, if I understand Campbell’s stance on this problem; the LabourGreen proposal for NZ Power “is no answer“.

Instead, begging the power companies to drop their prices is Campbell’s only solution?!

His “solution” is a do-nothing, beg-for-the-best, whilst New Zealanders are having to pay for higher and higher power prices.

To remind Campbell and his fellow businessmen and women; the more that we consumers pay for electricity –

– the less disposable income we consumers have to spend on their goods and services.

Without drawing a bright, pretty, picture with crayons, I can’t make that simple truism any clearer to understand.

Which is why, when the EMA joined BusinessNZ in an ideological vendetta against the LabourGreen proposal, they were not only doing consumers a grave disservice – but also slitting their own financial throats.

Perhaps Campbell and his supposedly astute business colleagues should re-visit their position on NZ Power?

Who knows – it might actually be good for business!

The Politics of Power and a Very Clear Choice – Part Tahi

The Politics of Power and a Very Clear Choice – Part Rua

The Politics of Power and a Very Clear Choice – Part Toru

The Politics of Power and a Very Clear Choice – Part Wha