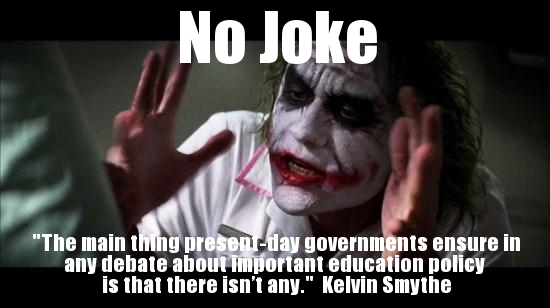 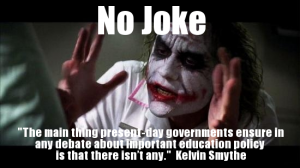 It’s been a busy week in education.  The media, unions, politicians, professors and pundits have all had their say on PISA, National Standards, and just about every other aspect of education.

And of course we had the obligatory crooning NZ Herald editorial praising Hekia Parata and following the party line on reforms.  It even goes as far as saying Hekia is “keen to see high-quality teachers acknowledged and rewarded appropriately”.

Hmmm, tell that to the union members who spent months and months fighting like wild cats to get the Ministry to agree to progression for expert teachers who want to stay in the classroom.

The point is, everyone seems to get to have a very public say about education other than the teachers, the parents and the students.  Where is their voice?

Well, I hear from them all the time since starting Save Our Schools NZ, and despite Hekia Parata and John Key saying they are right behind things such as National Standards, I can tell you very, very, very many are not.

And so today, I give over my post here over to two teachers who have, judging by the huge traffic to the SOSNZ blog this week, spoken for many.

This is their voice:

“We are two teachers who have been teaching for about 21 years each but we have never had to deal with anything as heart-breaking as reporting to parents about their child’s achievement in relation to National Standards. We feel we have been ‘bullied’ into implementing these standards, have not been consulted during any part of the process and labelled as uncaring and unprofessional when sharing our concerns.

Here is the reality of National Standards for us.

The first parent of a child in one of our classes who attended the three way interviews held at one of our schools recently was almost tearful when she asked, “Is my child special needs, because nothing that I know about him suggests that he is?” I then explained to her that the top part of our school report is the part that the government wants us to use to tell you about your child’s learning. I told her it’s about national standards and three words that are meant to tell you how your child getting on at school: “At the standard”, “below the standard” or “above the standard”.

I then said, let’s talk about the second part of the report, which tells you about what your child knows and can do, the great progress he has made and his next steps for learning. This part will also tell you about his confidence, his assertiveness and his huge enthusiasm for learning. It will tell you about how he relates to others, how he manages himself, the ways he thinks to help him learn and the ways he participates and contributes at school. Then her child spoke confidently and proudly to her about the learning stories in his portfolio. This parent was relieved, informed and proud of the huge progress her son had made towards achieving his goals. She said to me “You’ve just talked about my son.”

This continued, as I had to explain to the parents of kind, thoughtful, creative risk taking students that their child was below the expected level for their age according to the National Standards. I had to say to the parents of children who share their learning with others, challenge each other and themselves, set their own goals and work hard to achieve them, that their child was below the standard, but that was what the government wanted me to tell them.

For all of the children we have taught over the twenty five years who have left secondary school and gone on to be successful employers and employees, the way they experienced their schooling did not include anything remotely like national standards. The experience for them was a combination of seeing the relevance of their learning for them by teachers making this explicit, their teachers having high expectation around what they would achieve based on them as an individual, and developing a relationship with their teachers based on the teacher having a genuine desire for each student to reach their potential.

We have since discovered that this is the findings of some research undertaken by Russell Bishop and others as part of the Kotahitanga project which reveals important information regarding factors that improve the achievement of Maori students, in particular, but all students as well.

So to the parents who are being told those three words in whatever form, please do not accept that they tell you anything you need or want to know about your child as a learner and let the government know that.

Even if you are hearing the words ‘At the standard or above the standard’ what does this tell you about your child as a learner? We think that it tells you nothing as we don’t believe that the standards are an accurate measure of achievement. For example, one of our 11year old daughters who reads at a 12-13 year level with good comprehension skills is reading “at the standard” for her age. We already use a wide range of assessment tools effectively to be able to set goals for individual students and to measure progress. We believe that this is just one of the features that makes our education system recognised worldwide.

In our experience no student is ever motivated by the knowledge that they at failing i.e. below the standard. In fact it usually has the opposite effect. We have grave concerns that the stigma attached to being labelled a failure for a large number of learners will not only affect individuals but will have far reaching consequences. We fear that we are teaching a generation of children who will carry the label ‘failure’ into adulthood.

In attempting address a perceived ‘tail’ of underachievement this government has created a monster.”

That, Mr Key – That, Ms Parata – THAT is the voice of teachers and parents throughout the land.

You should try engaging with them instead of battling with them.  You should also talk to parents, honestly, and with students.  You might learn a thing or two.