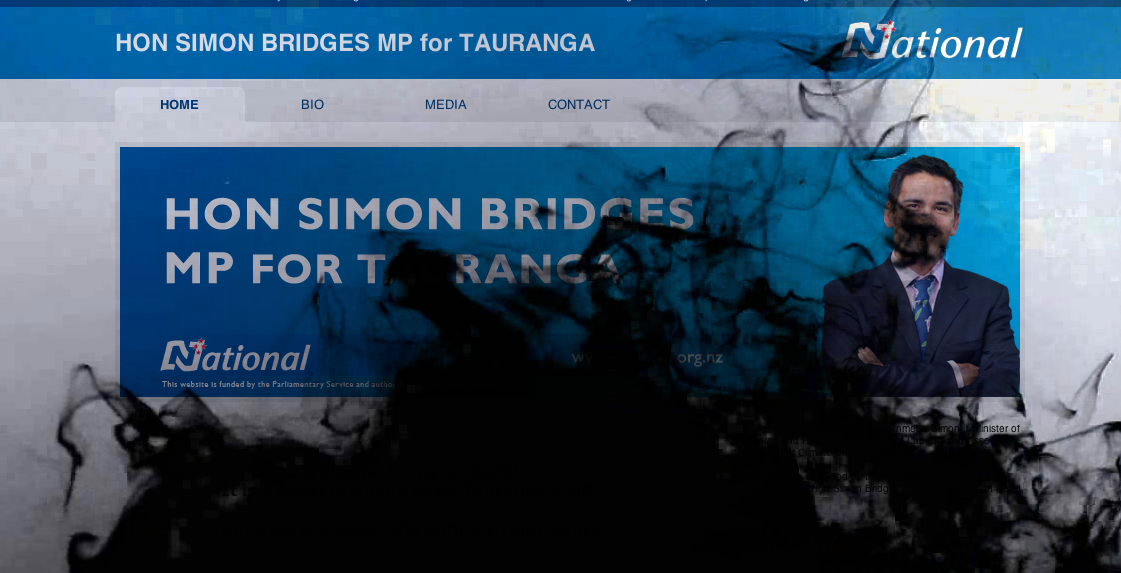 Some wisdom from our current Prime Minister,

“Yes, it is true that Anadarko Petroleum Corporation had a 25 percent ownership of the company or one of the companies that had a problem in the gulf. I think it is also worth remembering that in the Gulf of Mexico since 1947, 50,000 wells have been drilled, and to the best of my knowledge that problem in the gulf was the one major one that most people can remember.” – John Key, 23 October 2012, Parliament

That statement seemed so factual; so reassuring; so level-headed.

A shame, then, that it was also utter rubbish. Yet again, Dear Leader has made another statement that is simply untrue. Whether through ignorance or more likely willful lying, Key has once again misled the public.

This time his ignorance/lying is on a scale that beggars belief.

Because even as you read this blogpost, an offshore drilling well owned by  US company, Taylor Energy Co,  has been  leaking oil into  the Gulf of Mexico only 18 kms off the southeast Louisiana coast  – and has been doing so  since 2004 (see: Lawsuit proceeds against Taylor Energy over a 9-year Gulf leak).

The number of oil spills in the Gulf is considerably more than just “one” – whether or not people can remember them.  (And since when did a problem or risk simply “go away” because people forgot about them? Is that how National conducts it’s risk analysis – whether the public can remember an incident or not?)

Despite  Key saying that “out of 50,000 wells drilled in the Gulf of Mexico, there had been a problem with only one of them”, Radio NZ reported otherwise,

But official US figures show that between 1964 and 2012 there were 259 spills of 50 barrels or more from various Gulf wells. They also show the deeper the wells went, the higher the chance of a spill.

And in the same Radio NZ report, an industry specialist  Dugald Roberts, who has 30 years of  experience in  US and Middle Eastern oil exploration, described Dear Leader’s  claim as “nonsense”,

“… one in every 20 wells will have containment issues and even that’s a conservative figure.”

According to government statistics, from 2006-2010, there have been 40 spills in the Gulf of Mexico of 50 barrels or more. No spills that large have occurred this year, but if a spill does occur, industry officials say they’re ready.

Key’s reassurances therefore ring hollow – especially as he is misleading the public on the risks.

A study based on Gulf of Mexico oil wells and provided to the minister last year showed that the risks of an incident massively increased at a depth of 1500 metres, which is proposed in the Pegasus Basin off the South Island’s East Coast. It said that there was a 10 per cent chance of an incident within the first year at a depth of 300m – the level of exploration in Taranaki. When the depth was increased to 1500m, the risk rose to 70 per cent.

When challenged on this finding in the House yesterday, Ms Adams said the incidents in the study referred not only to oil blowouts but also lesser problems such as property damage, equipment failure or worker injuries.

In trying to minimise the risk, Adams has inadvertantly  revealed her own Leader to be ill-informed or a liar.

It would not be the first time that Key has been either badly informed (some might say woefully ignorant) – or wilfully mis-represented the truth (some might say outright lying).

National has engaged in risky policies in the past. The ‘reforms’ and de-regulation of  building industry codes and the dis-establishment of the mines inspectorate – all in the early 1990s – has resulted in over $11.3 billion dollars worth  of leaking and rotting homes, and the Pike River mining disaster.

Every time National de-regulates, it is left to the rest of the country to deal with the consequences; pick up the pieces; and pay the cost of fixing a mess.

This was never more so than with the Pike River disaster and the leaking homes crisis.

As I wrote in November 2012, in response to former ACT MP Heather Roy’s outrageous comments on TVNZ’s Q+A on de-regulation,

“The up-shot of  the […] report (Review of the Department of Labour’s interactions with Pike River Coal Limited) is that instead of actively policing mines and their safety standards, it was all left to individual companies to address. Instead of being “prescriptive” as the DoL laments, individual companies were to adopt a “a performance-based approach” and to “to take ‘all practicable steps’ to ensure health and safety, leaving it to the discretion of the duty holder how they achieve that standard“.

Well, we know how that turned out.

Twentynine men paid dearly for the liberalisation of safety regulations, in one of the most dangerous fields of  work on this planet.

The current state of our mines inspectorate is now so bad that even state-owned coal-mining company, Solid Energy publicly expressed it’s dis-satisfaction and called for the process to be handed over to Queensland for safety oversight…(Solid Energy wants Australia to run mines inspectorate)”

See: Heather Roy – head down the mine shaft?

Well, this blogger has had a royal gutsful of politicians implementing reforms that result in death and damage. Especially when, as Bill Birch did, they walk away and blame others for laws that they themselves passed.

As I wrote in May this year,

“It simply beggers belief and defies understanding that a Minister of the Crown – Simon Bridges, to be specific – could utter words like this,

“At the time of Pike River there’s been serous systemic failures in the old Department of Labour, and as a health and safety regulator they were clearly dysfunctional and ineffectual.

But the problems were truly systematic and no one person was to blame.”

So  how on Earth has Bill Birch –  when he was Minister for Labour in the 1990s and was  the architect of de-regulation of the mining sector – gotten off so lightly in the media?

For Birch to say,

“It raises the question of why weren’t they addressed if they were obvious deficiencies in the legislation – I don’t believe they were. I think systemic failure is more about people not putting the systems in place.”

– is a travesty of everything that decent New Zealanders believe in.

Basically, what this “gentlemen” is saying is that because we, as a country, were lucky enough to get away with no disaster in our mines up until the day that Pike River Mine exploded in a flash of explosive methane – that his “reforms” cannot in any way be blamed?!?!

How in gods’ name does that make any sense whatsoever?!

Why on Earth has the media  not jumped all over this?!

The record of Birch’s “reforms” is readily available for those with the eyes to see, and the inclination to use those eyes.

The gutting of the mines inspectorate and permitting self-regulation by mining companies,  had it’s genesis in the early 1990s – again the Bolger-led National government –  where Bill Birch introduced the so-called “Health and Safety in Employment Act”, in 1992.

Under the guise of  “eliminating red tape”, this dangerous piece of legislation allowed mining companies to self-monitor their own activities…”

And now Key and his mates want us – the tax-paying public who will eventually have to shell out (again) for any deep sea disaster clean-up – to trust them that they have assessed the risks properly and implemented appropriate safety measures?

Because it wasn’t too long ago that Anadarko’s own corporate affairs manager, Alan Seay,  made a startling admission on Radio NZ.

On 23 October, Seay admitted  it would take two weeks before an oil blow-out and spill could be capped. Listen to Seay answering Kathryn Ryan’s question at 15:45,

Ryan: “How long Alan, to bring in [equipment] and cap any spill?”

Seay: “Well, you know, there are so many what-ifs involved in that, but you’ll have seen estimates of up to 14 days, or, yes, two weeks to bring say a capping stack into New Zealand and get that into place. So there’s a great deal of equipment that’s available in specialised locations...”

That is Anadarko’s own admission as to how long it would take to bring in specialised equipment to cap a blow-out.

Because none of that specialised gear exists in New Zealand.

Within that time, two weeks of uninterrupted oil would be gushing into the sea off our coastline, and eventually would end up on our beaches and estuaries.

As happened with the Deepwater Horizon blow-out in 2010.

Or these other instances of oil spills in the Gulf of Mexico,

3 June 1979: Gulf of Mexico: exploratory oil well Ixtoc 1 blew out, spilling an estimated 140 million gallons of crude oil into the open sea. Although it is one of the largest known oil spills, it had a low environmental impact.

8 June 1990: off Galveston, Tex.: Mega Borg released 5.1 million gallons of oil some 60 nautical miles south-southeast of Galveston as a result of an explosion and subsequent fire in the pump room.

16 September 2004 (to present):  Oil is continually leaking from the site of a Taylor Energy platform (Platform 23051) that was destroyed by Hurricane Ivan in 2004, and the Ocean Saratoga rig is back on site working to plug the leaks.

27 July 2010:  Abandoned oil well  leaks oil into a Louisiana bay about 35 miles south of New Orleans after a barge crashed into the structure.

Anyone thinking they can rely on Maritime NZ should think again. Despite being mandated to take charge of any oil-well disaster – Maritime NZ has no specialised equipment to speak of (see: Anadarko Oil spill equipment grossly inadequate).

Neither Anadarko nor Maritime NZ has anywhere near this kind of equipment, as used in the 2010 Deepwater Horizon Gulf blow-out,

• Nearly 2,000 personnel are involved in the response effort with additional resources being mobilized as needed.

This is the risk that Key  is irresponsibly exposing our country to.

Well, this blogger has an answer to this problem (I refuse to refer to it as an “issue”).

So, let’s apply it to those making the Big Decisions: John Key and Energy Minister Simon Bridges.

My plan is simple: should a spill or blow-out occur, those Ministers responsible will be held to account and made to contribute to clean-up costs.  Even years later, after they have left (or been thrown out of) Parliament.

That would involve placing a lien over John Key’s amassed $55 million dollar wealth and his properties in Parnell, Huapai, Rodney, Hawaii, and London and Simon Bridges’ home in Matua, Tauranga.

In fact, under the principle of Cabinet Collective Responsibility the assets of every single National and Coalition Minister should be made available to be used to pay for damage and clean-up of the environment and affected people’s loss of earnings and loss of property values.

Let’s start applying National’s notion of taking Personal Responsibility to those individuals who have the power to affect our lives, society, and economy in ways that no other person or organisation has in this country: Ministers of the Crown.

It is time to hold government ministers to account and to make them all directly responsible for their actions and decisions. It’s called “strict liability“.

Let’s see the same accountability from our politicians that they demand from us.

Now let’s see how fast permits are granted for deep sea drilling in our coastal waters.

National’s disdain for democracy and dissent

A lethal lesson in de-regulation

Health and safety jobcuts? Haven’t we been down this road before?!

W.o.F “reforms” – coming to a crash in your suburb

Heather Roy – head down the mine shaft?