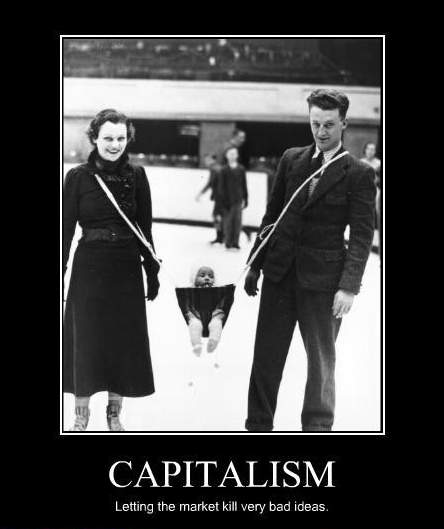 The eighteenth century was one of the most unequal ever, at least in the European west. Further, it was very much a century of capitalism; albeit commercial and agricultural capitalism (rather than the industrial capitalism that came in the nineteenth century). Adam Smith, in his Theory of Moral Sentiments (1759), noted this inequality, and presented what might be interpreted as the first formulation of the trickle-down theory:

The rich … consume little more than the poor, and in spite of their natural selfishness and rapacity, though they mean only their own conveniency, though the sole end which they propose for the labours of all the thousands whom they employ be the gratification of their own vain and insatiable desires, they divide with the poor the produce of all their improvements. They are led by an invisible hand to make nearly the same distribution of the necessaries of life, which would have been made, had the earth been divided into equal portions among all its inhabitants. … When Providence divided the earth among a few lordly masters, it neither forgot nor abandoned those who seemed to have been left out in the partition. These last too enjoy their share of all that it produces.

We should note firstly that Smith, and the other founding fathers of the liberal project (and indeed of all philosophical projects) were storytellers rather than historians. Providence did not, of course, divide the earth among a small number of very privileged people. However that division of resources has been the reality of many epochs, including Smith’s own.

A broad appreciation of Smith’s thought is that he has an underlying theory of growth, rather than theories of debt or redistribution. The word “improvements” indicates that he sees the wealthy as having to invest large portions of their incomes because there are limits on their capacity to consume goods and services. It means that, in reality, large portions of food and other necessities are advanced to workers, who notionally repay through the proceeds of economic growth. However, because the rich are already satiated, the growth dividend is continuously recycled back to the poor.

In today’s context, the rich prefer to lend entitlements to the relatively poor rather than pay adequate wages or adequate taxes. (We should understand this lending as being akin to paying insurance premiums; collectively, the creditor-interest only wants to be repaid in the event of their own impoverishment.) Thus the distribution of goods and services is much as it would be if wages and/or taxes were much higher.

A relatively equitable distribution of consumer goods and services is an absolutely essential requirement of industrial capitalism, and is probably a requirement of all forms of capitalism. Industrial capitalism requires the mass production of wage goods (ie goods that the relatively poor buy; equivalent to Smith’s “necessaries of life”). That means there must be mass consumption of wage goods. If the capitalists don’t pay enough for workers and the other relatively poor to buy wage goods, then they must lend them the equivalent of those wages.

The difference between the distribution of income and the distribution of expenditure is debt. The relatively poor get stuff (regardless of earnings) and the rich get what they call ‘assets’. The debt of the poor (or whoever the indebted are) is the financial wealth of the rich.

Thus the creation of debt yields a win-win outcome; tantamount to Smith’s “invisible hand”. The poor get what they need and the rich get appreciating financial portfolios. The economic wealth of the rich is consumed by the poor.

We also note that the repayment of debt – in the aggregate – represents a lose-lose outcome; a nightmare financial and economic scenario where the poor become economically much poorer and the rich become financially much poorer. (In the last 25 years one political leader ran a successful policy to repay his country’s – Romania’s – public debt. The Romanian people were utterly impoverished as a result; he, Nicolae Ceausescu, and his wife Elena were arrested and shot, on Christmas Day 1989).

We avoid financial Armageddon by maintaining the fiction that debts should be repayable but never repaid. It’s our Faustian bargain. It’s a dangerous path to affluence, but to some extent unavoidable. Whatever the faults of capitalism, most of us would rather live in South Korea than North Korea.

How do we mitigate the problem, by ensuring that stuff is distributed equitably, and that entitlements are also distributed equitably? I don’t argue that there should be no difference in the distribution of income compared to the distribution of consumption. But a much smaller difference than we have today (and that we had in Smith’s day) would substantially reduce our Faustian precariousness.

In the thirty years after World War 2, the capitalist world enjoyed unusually equal income distributions, and hence much more financial stability. This was enhanced by the massive write-offs of financial assets during the events of 1914 to 1945; it was as if the financial ‘reset’ button was finally pressed, in 1945. The post-1945 years were a period of low inherited debt, and relatively slow accumulation of new debt. Those years that post-war baby-boomers assumed to be normal, were quite atypical in the world’s economic history.

One of the drivers of income equality from 1945 to 1975 was the high bargaining power of workers, facilitated by full employment and low labour force participation rates. These conditions cannot (and should not) be recreated by today’s policymakers.

There must be – and there is – another way to achieve equitable income distribution in contemporary capitalism. It’s not through the labour market. It’s through the rediscovery of ‘the sovereign’ as a third interest (in addition to labour and private capital).

The sovereign was effectively banished as an interest by the founders of the liberal project; founders such as John Locke and Adam Smith. To some extent, with good reason. Today, however, we live in an era of democracy. The sovereign is us, in our public personae.

When we properly account for a public share of national income, we are all entitled to equal dividends from the public share. Indeed, just as equities – property rights – are an essential basis for the distribution of capitalist profit, so equity in public property provides a philosophical basis for social distribution. We need to assert our public property rights in more transparent ways.