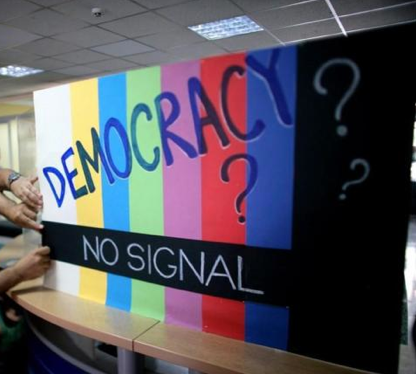 Saturday is D-day for television broadcasting in New Zealand – and the digital switchover debate is only just beginning. Viewers beware.

The survey brings more bad news for the country’s regional channels. They were encouraged to switch to the Freeview digital terrestrial transmission (DTT) platform. The tracker survey indicates that their programmes will only be accessible in 27 percent of households with digital receivers. While their old analogue signals used to be received in all the homes tuned into free-to-air television, now they can only reach less than half of them. And the regional broadcasters are paying more for the privilege.

Broadcasting Minister Craig Foss stepped into the digital debate last weekend, with a claim that “all bar one of New Zealand’s regional channels have made the digital switchover with little issues”. He is wrong.

Analysis of official documents shows that five years ago, there were 20 regional channels with analogue broadcasting licences. Only 10 have made the transition to the Freeview DTT platform.

Four are operating under the radar on their own, independent digital transmitters because they couldn’t afford the cost of switching to Freeview. They just have to hope their viewers can find them without the help of the Freeview electronic guide.

Three have vanished without trace.

Two are still operating on their old analogue transmitters, still looking for a digital solution.

And one – the oldest and the largest,Triangle Television’s Face channel in Auckland – is no longer available free-to-air and can be found only on the pay-to-view Sky platform.

Broadcasting Minister Foss was wrong again when he told Radio New Zealand last weekend that non-commercial regional broadcaster Triangle Television had “made the commercial choice to go behind a paywall.”

Triangle’s chief executive Jim Blackman issued a quick rebuttal statement: “The company was given no choice but to secure its future. There was simply no spectrum for Triangle Television to move to in the Auckland region. Unfortunately, the spectrum that could have been used to transition us as a community and public service broadcaster was sold-off to a commercial operator.”

How did this happen when clause 6.5 of a 2006 Crown Agreement with the State-owned transmission enterprise Kordia required Kordia to call for expressions of interest in its limited supply of regional digital spectrum and terrestrial transmission capacity and to give priority to an existing regional non-commercial broadcaster if competition for the opportunity exceeded its ability to supply?

This “little issue” took on more significance this week when the Ministry for Culture & Heritage chief executive Lewis Holden responded to an Official Information Act inquiry.

“There are no authorizations held by the Ministry for Culture and Heritage to vary the terms of the 2006 Crown Agreement as Kordia has never been relieved by the Ministry of its obligations under clause 6.5 of the Agreement,” Holden says.

Holden says his ministry is unable to identify any communications which confirm this occurred. He also says Kordia was unable to provide his ministry with copies of the emails that Kordia claimed to have received, approving its normal sales process as being sufficient to meet the requirements of clause 6.5. I have asked Kordia to confirm this is the case, and await its response.

In its correspondence with the ministry, Kordia has made valid points. Under the State-Owned Enterprises Act, it is bound to operate as a successful business. It has no mandate to offer services to Triangle or other non-commercial broadcasters on non-commercial terms. It is also entitled to form a view as to the ability of prospective customers to pay.

The SOE Act also offers a solution to this dilemma. The Ministry could bridge the gap between a reasonable price for a non-commercial broadcaster and Kordia’s standard commercial rate. There is no indication in any of the many official papers I’ve seen that this option was ever explored. Just as there is no indication that another option that was raised in one Cabinet paper – regulation to ensure spectrum was available to non-commercial TV broadcasters at reasonable rates – was ever given any further consideration.

Meantime, my last programme was transmitted free-to-air last Tuesday on Triangle’s Face channel. After D-day, Face – like the four other regional channels who will not be broadcasting on Freeview – or a Freeview-like platform – no longer qualifies for local content funding from NZ On Air. Of the 8 regional channels that were operating on non-commercial licences, only 3 will continue to qualify for NZ On Air support after D-day.

On D-day, all non-commercial television broadcasting licences will be terminated.That means not a single television broadcaster can be held responsible under the terms of a licence for delivering any of the public and community service benefits that are promised in the Government’s current Regional and Community Broadcasting Policy Framework. Just another “little issue” on the list.

Of the 20 regional channels licenced to operate five years ago, only 10 are operating on Freeview today. Eight of those 10 Freeview regional channels are only accessible in the 27 percent of digital TV households in their home regions that are equipped with a DTT receiver.

That’s a high casualty rate for a digital switchover “with little issues”.