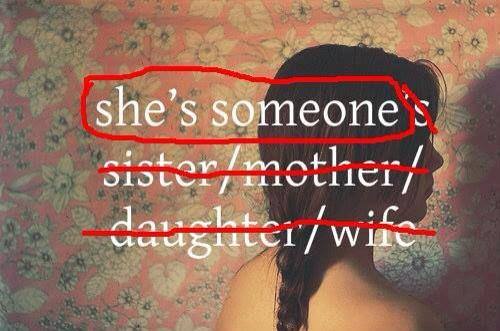 Picture from Parenting For Social Justice.  Content warning for discussion of rape, including some specifics.

Over at The Hand Mirror we changed our masthead a few years ago to include the quotation “Feminism is the radical notion that women are people”.  Rebecca West is credited with first saying this, and I have to say it’s a frequent refrain in my head, and sometimes outside it too.

And so I’m getting a little over the “how would you feel if it was your daughter?” challenge to rape apologists.

Women don’t matter because of their relationship to men.  They matter, we matter, because we are people;  full modern human beings, or Homo sapiens sapiens if you want to get all scientific about it.

New Zealanders aren’t very good at difficult conversations.  Many of us practice avoidance rather than active discussion of the hard bits.  I suppose it’s easier to say “what if it your daughter was raped?” than “what if you were raped?”

Those who are the victims of rape are not somehow lesser beings.  They bear no blame for the accident that has happened to them.  Their clothes, alcohol intake, previous sexual behaviour, are all irrelevant.  I say “they” because, as I shared elsewhere this week, my own experiences to date have been the stories of others, some near misses.

And watching, and trying to intervene sometimes, in behaviour very similar to what it sounds like the Roast Busters Rape Club has been undertaking – the deliberate targeting of an individual girl or young woman with alcohol, to get her into a state with limited capacity to consent, and then disappear to a bedroom.

I’ve seen that happen, 20 years ago in Glenfield.  The modus operandi of the main person in my circle who used to do it was to start a drinking game and then skew the rules to get a particular female acquaintance (not always the same person) totally blitzed.  Sometimes I would monitor the game, as the annoying sober one, and call this chap on his re-interpretations of the rules to the detriment of his target; somehow she would always end up transgressing and having to scull more than anyone else.  This didn’t make me very popular.  Neither did sometimes explicitly saying “you are just trying to get Suchandsuch drunk” in front of her, to warn her.  I wish now I had done more.  I don’t know for sure that rape happened in those bedrooms, but I do know this person later raped his then girlfriend, when we were adults.

I didn’t understand what all this was at the time.  I knew it didn’t feel right, but I also knew that I wasn’t popular for voicing that.

All of this is about an attitude towards women and girls that sees them as bodies, as conquests, as holes. This attitude is far from new, or unique to the Roast Busters Rape Club. How awful is it that many women and girls have it so ingrained in them that this is what we are that we often don’t see rape culture ourselves?

Women are people.  It’s really not that radical.