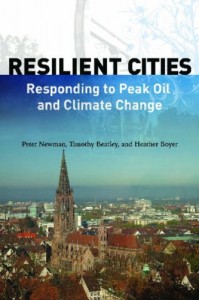 Last week one of the world’s foremost thinkers and advocates of what I call smart transport, Professor Peter Newman of Curtin University, visited New Zealand.  Newman is currently a member of Infrastructure Australia and was instrumental in the revitalisation and subsequent development of Perth’s commuter rail system.

Newman and his colleague, Jeff Kenworthy, also coined the term automobile dependency, what I have (for shorthand) previously blogged about as car dependence, and published the first comprehensive studies on the phenomenon.

You can listen to an excellent 20 minute interview with Newman that aired Sunday morning on Radio New Zealand.

Newman made several important points in the interview that are worth reiterating here.

Firstly, New Zealand is one of the last developed countries to still be throwing a huge chunk of the transport budget at new (or duplicate) highway capacity. It is well established in the literature that motorways do not reduce congestion, but make it worse. Moreover, new inter-city highways are not the most cost-effective way to reduce transport costs and thereby generate productivity gains.

So, the Government’s roads of significance to National (RoNS) programme is well and truly behind the times, and likely to be a huge waste of money that could be spent on far more important and economically useful transport projects.

The Wellington Northern Corridor is the worst of the RoNS, in many respects, because it will actively undermine the current advantages that the capital has – namely good public transport, walking and cycling.

Secondly, Newman emphasises that the trends are already changing rapidly. Chris Laidlaw, in his interview with Newman, expresses surprise at the fact that vehicle use and car ownership is down and likely to decline even further. Laidlaw is typical of his generation, who may well support public transport on social or environmental grounds, but wrongly believe that we need to fight New Zealanders inherent and immutable desire to drive their own car everywhere.

As I have mentioned before, car dependency is not the result of the market, but of traffic engineering and planning practice that reduces people’s choices. Therein lies an opportunity to do things smarter. But even with continued car-oriented planning and funding, New Zealanders are already driving less. 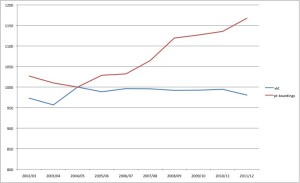 The indexed graph to the right uses data from Ministry of Transport and shows clearly that vehicle use (vehicle kilometres travelled or vkt for short) has declined from its peak, while public transport use is growing quickly.

This is true in all rich countries. Young people are far less interested in owning a car or using it. They would rather live in a vibrant urban area, and they can use phones or social media to connect while taking a train or bus. Incidentally, this preference isn’t limited to Millennials. Many retired couples are downsizing and moving to more walkable neighbourhoods.

People are already voting with their feet, we just need government policy, planning and funding to catch up.