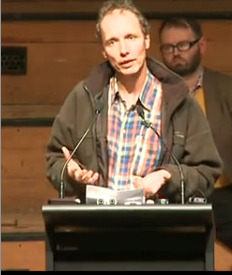 So setting aside for a moment the issue of spying on New Zealanders – I want to say what the GCSB does most of the time – because it mostly spies on other countries. It mostly spies on other countries, and a large part of its work is not spying for New Zealand, it’s spying for the United States, and all that work that it does, is never ever seen by New Zealanders, and it is in effect like an outpost of the NSA in the South Pacific – even though they would never like people to say this.

And I want to, I’ll give you some examples of this, because the main reason we should be worrying about the GCSB for other people, not ourselves actually.

In the 2000s, we moved into this thing whole thing to spy on Spanish speaking countries of Latin America. Why?

We’d already moved into spying on Iran; you can guess why – and after September 11 – GCSB officers have been flying away on regular shifts to work out of US headquarters in Afghanistan, alongside their military trained colleagues, to spy on the ‘enemy’ – except it’s not an ‘enemy’ New Zealanders were told about – to help kill them with raids and bombs and drones, in Pakistan and Afghanistan.

And if you think – what this means of course that if you think New Zealand’s interests and foreign policies and values are identical to that of the United States and Britain and then this seems like a good idea – but if our interests aren’t exactly the same – then years after we’ve stopped being a colony – acting like a colony which still does the work of these countries – is a very strange place for New Zealand to be [audience claps].

Now, the other thing I want to say is about, lots have been said; I want to say a little bit about spying on New Zealanders. I want to talk about how far and how wide it has gone – but also how far and how wide it hasn’t gone first. And I say this because there will be, when this Bill passes, whenever legislation is passed that is too wide and too poorly thought out and it’s too secret [to] what they’re doing and there is not enough controls and the wrong people are making the decisions – there will be people targeted like you been hearing about tonight who are the wrong people who don’t deserve to be victims – they’ll be casualties to this piece of legislation when it does through the way it does, and it looks like it will do.
But also I’m in the position where I got; I get contacted by large numbers of people who worry that they are being spied on, because they hear about things like this. And one of the great, one of the sad things about having unnecessary spy laws and unnecessary powers is they don’t just create real harm they create much more wide spread fear.

And so the thing I want to say tonight, even though it sounds a little bit counter the meeting, is that most people in this room are not going to be spied on by the GCSB and most people out there throughout society – and there will be [people who are] – but part of us trying to reduce the harm and the hurt of something like this, is not to spread unnecessary fear – because they attack peoples sense of self and their confidence and their ability to be involved in politics [audience claps].

Now like the other speakers here – I think this is obviously a really bad piece of law. It’s an unnecessary piece of law. It’s being justified, sometimes with absurdly weak excuses – and there is almost an invitation to future scandals which will come along when we discover what went wrong with it.

But I’d like to also just before we run out of time put [it]in a larger context because what’s going with this GCSB Bill is just the tip of an iceberg of what is happening – it is not happening in isolation – what we’re really talking about is that we’ve moved into the digital age. We’ve moved into a time where people live much more of their lives online.

They store their lives online. They communicate online. Compared to using a telephone a generation ago – people’s privacy and their selves are vastly more exposed than they were in the past – and at the same times as people have exposed themselves more digital technology has given previously unimaginable powers to intrude into that.

And it doesn’t matter whether you swipe your card in the supermarket ‘cause you think you’re going to save some money and it registers what you brought and who you are every time you do that, or whether it’s the GCSB or things in between – there’s been a huge growth in the ability of people to have their live surveilled.

On top of that, different kinds of mass surveillance tools have come out. The ‘War on Terror’ which allowed a vast expansion, resources, the GCSB doubled in size, it’s overseas allies more than did that, and just like the American intelligence agencies which moved from spying on the Russians to spying on Americans – surprise, surprise we discovered the same thing had happened here – that they moved those great big Cold War resources to use against domestic targets as well.

So that’s the context in which we see what’s going on, and it’s all happened invisibly and secretly and the GCSB Bill we should realise is not the end of the world and the only issue on it, it’s like a jump, on a curve which has being going up and up over the last couple of decades – and that’s, so that’s, my main message tonight – whether or not they pass this Bill, which they probably will in the next few days, that can’t be the end of the fight, in fact bringing the GCSB into the light and having the attention on it has to be the beginning of ongoing action, and there is one other thing that we should feel inspired about at the moment and this is another tremendous part of the digital age and that’s the Wikileaks example [audience claps].

And that’s the example which is going to keep, this is the example, this is the idea that one of the ways that ordinary people can control centralisation and excesses and abuses of power is by leaking information, by fighting back in that way, and what Edward Snowden is doing at the moment is something that just doesn’t happen every year, it doesn’t even happen every decade – he is exactly the right person, at exactly the right time at that point in our history, who is illuminating something incredibly important and the energy which we have built up in New Zealand about the GCSB Bill combined with Edward Snowden living in his house hidden, in Moscow now, is the perfect opportunity for us to change things.

So I would argue this is the time not to be despairing if the GCSB Bill goes through but be setting up new internet privacy organisations in New Zealand and to be working together and to be looking at that broadly with a picture and start to change it, and I feel optimistic about this because I believe, the basis of my life is, if ordinary people know about things then they will care about them and they will work to change them. If you don’t feel as optimistic as me,

look around this room, please look around the room, and see how many people there are here with you and keep caring and keep working to change it.