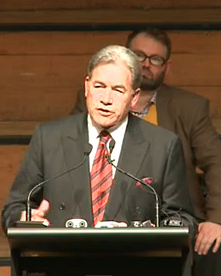 Thanks to John Minto and those people who have organised this evening and for you to have come out tonight, and for the chance to speak to you about a very critical issue for our country.
The issue we face is not whether we have security agencies or not – New Zealanders are after all realists, they know we live in an imperfect, often evil world. We need to have security agencies such as the GCSB.

The real issues are how much new power are we giving the GCSB? Second how do we have an effective oversight of that agency, and third how do we avoid relying on one person, the Prime Minister, to safe guard our civil liberties? New Zealand First’s proposal on the Bill addresses all these questions.

And we have all offered a constructive way forward, for a robust, workable oversight of this law and the GCSB – but sadly the Prime Minister has acted in bad faith. There was only the pretence of building a wider agreement, but the moment he got the one vote he needed, from you know who [audience laughs].
 
Well you weren’t trusting John Banks we’re you [audience laughs]?

Once he got the one vote, it was a done deal; any thought of seeking broader Parliamentary support vanished.

And the tragedy is that despite the fact that a lot of these people went through Auckland Law School, not one National MP has dissented from the current GCSB Bill [audience heckles].

Now George Orwell had a phrase for that – “group think” [audience claps].

They’re telling the country if ‘you’re not with us, you’re against us’, ‘if you’ve got something to hide’ – [audience laughs].

That’s what they’re saying, the law’s justified. Doesn’t matter what you’re hiding, that it might be private, it’s still their concern. – now what an odious view the Government and its cling-on’s take of their fellow New Zealanders.

First, the GCSB was an international spy agency; it will now become also a domestic spy agency.

Second, the GCSB’s intelligence powers and functions were constrained; they will now be seriously widened.

Fourth, under existing law all manner of domestic information data is off limits for the GCSB – now it is not.

And fifth, today a warrants’ checking agency has to explain the particular, or general threat to national security posed by an individual – now if accessing metadata, no such explanation is required.

And six, no such explanation is required, if private communicating parties should have contemplated that their communication could be accessed by a third party.

This sounds complex but, in fact, it reads like an excuse for hacking, let alone troll security agencies.

What’s worryingly clear though ladies and gentlemen, is that Mr Key does not understand the law that he’s talking about [audience claps].

It was clear as daylight on that Campbell show, that he didn’t understand the law – and it will be clear to all those who have being on the committee looking at this matter that this man has no experience on this issue and is not concerned about its complexities and it’s dangers [audience claps].

He does not understand the law, and let me say this, if he did, and he believed what he was saying was true, why does he plan to make a Parliamentary statement in the Bill’s, in the Bill’s Third Reading, as guidance to the courts.

Here was I thinking our judges had New Zealand case law as a precedent, Commonwealth and other precedents to guide them – now they have John Key’s guidance by way of a speech [audience laughs].

This is thoroughly bad law. It’s an admission by the Prime Minister that his law is clear and present danger to the freedoms and values of the people of this country.
I want to close by saying; we will not support legislation that makes our Prime Minister all powerful [audience claps].

Even if you thought John Key was as trust worthy, benign, and as innocent as Mother Theresa [audience laughs].

You would be mad to put so much unbridled power into the hands of one person, who has such a flimsy understanding of hard fought civil liberties [audience claps].

Finally, finally – when Mr Key said he had no knowledge of Kim Dot Com, or the raid, he was not telling the truth [audience claps].

His constant denials are false, and his supporters need to know, that soon he will be found out, and when that day happens, they will bitterly regret their trust in him.

We ask the Prime Minister and his colleagues, even at this eleventh hour, to think again.