Headline: McDonald’s gets serve from union 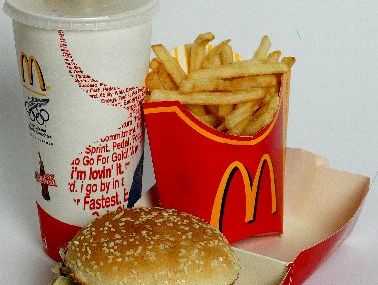 “At times customers have had a serve of bad language with their fast-food orders.”

A union official claims child labour, workers paid in food vouchers and management threats are all in a day’s work for staff at McDonald’s in Kaikohe.

At times customers have had a serve of bad language with their fast-food orders, Unite Union campaign manager Gary Cranston says.

McDonald’s has declined to answer the specific allegations raised by the union, saying they were being raised as part of a collective employment agreement dispute.

The union is calling for a boycott of McDonald’s stores owned by the same franchise holder in Kaikohe, Kerikeri and Kaitaia.

Mr Cranston claimed that workers at the Kaikohe outlet had told him that a manager had sworn at staff and one worker had an orange juice thrown at her in front of others.

“The [Kaikohe] restaurant manager has her three kids working for her at the store,” Mr Cranston said. “The youngest is only 12 years old. She is being paid in McDonald’s coupons.”

When a staff union delegate raised that and other issues which she considered breached company policies she was allegedly threatened with disciplinary action that included her hours being cut, Mr Cranston said.

The franchise owner, Lynley Reid, told the Northern Advocate she could not comment about the serious allegations and referred inquiries to MacDonald’s Restaurants (NZ) Ltd.

A company spokesperson said the Kaikohe issues had been raised in the context of collective employment agreement negotiations which broke down a month ago.

“Unite have been active in the media lately, speaking about McDonald’s on a variety of issues,” she said. “We are committed to continuing to negotiate in good faith with the union, and it would be inappropriate for us to comment further at this point.”

But Mr Cranston said the union was concerned about a “hornet’s nest of issues” at the Kaikohe store, including allegations of staff working in positions above their pay or training level, sexual harassment, racial discrimination and understaffing.

“I’ve never seen anything like it. It is just out of control and it all comes back on the franchisee for failing to provide her crew with a safe and harmonious workplace, as she is legally obliged to do.”

Last Saturday officials and workers staged a protest outside the Kaikohe store and presented it with the union’s first “Worst Franchisee of the Year” award.

Trading Military Equipment With Israel Is A Human Rights Outrage