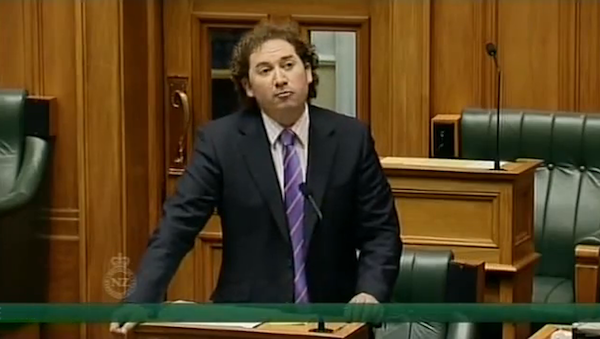 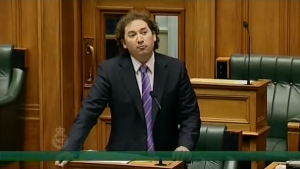 I had not intended to ever write the words Aaron Gilmore. I thought enough had been said about his arrogance and boorish behaviour and seeming contempt for lesser mortals such as waiters

Then I read in the Herald an article on AG by Bob Jones. Writing on arrogant behaviour by Bob Jones is probably only justified in that he knows the subject well. Contempt and scorn for ordinary mortals has been his stock in trade. Noticeably after decades of property speculation he took that title most sought after by those considering themselves the elite – a knighthood.

This led me to think that AG probably took as his model people like Jones and Donald Trump. Perhaps he was more crass and therefore less skilful than they at avoiding the type of scene that brought about his downfall. But such role models are plentiful in New Zealand public life- especially in politics.

In his own party the leader revels in being called the “Silent Assassin”. And he positively glows when challenged about his and his party’s arrogance at selling state assets despite the massive public opposition. And with a nod and a wink from the PM the owners of a casino can avoid a transparent process to construct a convention centre and can have extra pokies for the asking. Forget about public concerns on problem gambling. If Hollywood Moguls don’t like New Zealand labour laws then Mr Key will simply arrange for them to be changed to meet the needs of said moguls. If the GCSB has broken the law and spied on New Zealanders the answer is simple- change the law to make such spying lawful.

His colleague Judith Collins clearly likes being known as “Crusher”. She likes to appoint friends to high places and to toss aside the findings of High Court judges that are not to her liking.

John, Judith, Stephen, Gerry, Bill and their senior colleagues all played their part in leading AG to think that arrogance and contempt for the public is the route to success and high office.

If AG had looked back a few years the Douglas cabinet would also have inspired him. Roger and his colleagues sold public assets and drove down living standards for the masses with an insouciance that literally took the breath away.

And they weren’t to be deterred from their course by massive public opposition and that of the party members who worked to put them in high office. The Labour caucus saw that their fortunes and perks were tied to the cabinet elite and in their overwhelming majority they went along for the ride and cursing Jim Anderton as a an old –fashioned socialist demagogue for clinging to outmoded principles such as fairness , free public education and health ,justice for all and full employment Get with it Jim! The market is king!

And like Bob Jones Roger took a well-deserved knighthood for his disservice to the public. Now that’s giving two fingers to the public for you.

Helen Clark found also that support for refugees was all very well as long as they didn’t spoil things by turning up in New Zealand and invoke the Refugee Convention. But the Refugee Authority and the Courts could jump in the lake if they thought a finding that Ahmed Zaoui was not a terrorist and that he was entitled to natural justice was going to allow that jumped up Algerian nobody to get in her way to acclaim from Bush and Blair.

And she could rely on Caucus colleagues agreeing (if they knew what was best for their careers) to put aside such tiresome obstacles as natural justice and the rule of law and allow the SIS to issue a security certificate that scuttled such nonsense. There was arrogance for you AG!

And last but not least AG would have had inspiration from Winston Peters. The New Zealand First leader is undoubtedly the champion in finding human targets to belittle and slander in the pursuit of power. Find someone or preferably a whole group whose race and religion left them vulnerable and Mr Peters was in his element. Abuse and slander of Chinese, Arabs, foreigners of all types and Muslims, Hindus and Sikhs were and are grist to his mill.

In 2005 Mr Peters harangued Parliament, protected by privilege, about 2 engineers who had emigrated from Iraq and had been close collaborators of Saddam Hussein. Or so Mr Peters said. But not a word was true. However, Mr Peters just moved on without a word of apology to two honest but ordinary men whose lives, and those of their family, were thrown into turmoil by his slanderous attacks. They are still waiting for an apology long after Mr Peters accepted the baubles of office. I wonder what lessons AG learned from watching Winston Peters?

It is little wonder then with such arrogance on display in high places and disavowal of the “rules” that the New Zealand Police Force acted as it did in Ruatoki in 2007 with blatant disregard for what was lawful. Surely detaining Maori illegally must be alright? It was alright for Ahmed Zaoui.

AG was brought low by his unseemly and arrogant behaviour. But those whom he sought to emulate and who are cleverer at the game than he still prosper in public life here and elsewhere. High handed behaviour in public life, business and the public service will not vanish because AG has gone. It will take a more determined effort than that and the eradication must begin at the top. .