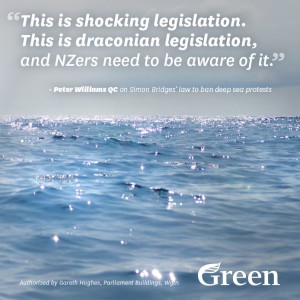 Simon Bridges revealed to Q+A that the government plans on criminalising offshore protests under the Crown Minerals (Permitting and Crown Land) Bill.* It’s a gross attack against freedom of expression, but the amendment will receive neither Bill of Rights vetting nor Select Committee scrutiny.** That’s a constitutional disgrace, but so very, very National.

So, crimes – in their crudest forms – are things that are repugnant to society or a threat against the establishment.*** I’m struggling to see how Elvis Teddy-style protest fits the criteria, but I’m looking at it wrong: this is about neoliberalism and the triumph of economic rights over social and political rights.****

Neoliberalism is all about freedom, apparently. But freedom for who? Hayek argued that liberty is maximised when coercion is minimised. However, that’s an argument for a small state – not the extension of social and political rights. Neoliberalism and its leading evangelists extend personal freedom in property rights and contract only. In all other situations, economic rights will prevail. In the current situation, economic rights have prevailed over the right to protest.

We’re sailing in dangerous territory when the government is prepared to extend the criminal law to protect economic rights, and the economic rights of foreign companies at that, and supress social and political rights. It’s dangerously authoritarian because the criminal law is at the heart of the state’s coercive power. Usually, criminalising dissent signals a drowning order. I don’t think that’s true here. Instead, I think the meek response outside of the blogosphere, committed leftists and legal purists signals that the government’s plans represent an affirmation of the dominant order.*****

*The wording of the provisions doesn’t explicitly mention protest, but in practice it will capture offshore protests.

**The amendment will be made by supplementary order paper.

***Crimes sometimes have a utilitarian aspect, for example we criminalise some actions in the interests of public safety. You can argue that the government’s amendment is to protect public safety – that’s laughable and shows a complete disregard for realpolitik.

****New Zealanders are guaranteed the right to freedom of expression and freedom of peaceful assembly in the Bill of Rights, but there’s no guarantee of any economic rights. There is also a similar guarantee in the International Covenant on Civil and Political Rights (which the Bill of Rights ratifies) and similar statutory schemes overseas. It is rare to find an economic right.