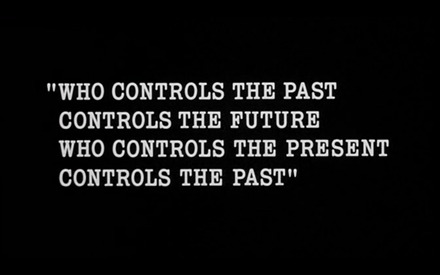 YOU CAN ALWAYS TELL when an ideology is dying – it starts lying.

In its early years a world-changing ideology relies on facts. It points to our lived experience of reality and asks: “Does this still work for you?” It has no need to falsify or distort: to the contrary, the more truth it speaks the more persuasive it becomes.

This was Neoliberalism in the late-1970s and 80s. The western world was on an inflationary treadmill. Prices were rising relentlessly and wages were following them up – but always with a little lag – with the result that, year by year, the actual purchasing power of people’s wages and salaries was falling.

As if this steady erosion of people’s incomes wasn’t bad enough, unemployment and inflation seemed to be linked. The newspapers called the combination of stagnating employment growth and runaway inflation “stagflation”. It was, they said, proof positive that the hitherto highly successful post-war policy of full employment – based on the economic theories of John Maynard Keynes – was failing.

According to Keynes, the State could keep everyone in work by spending large sums on goods and services calculated to soak up excess labour and stimulate demand. This expenditure was funded out of progressive taxation and from money the State would effectively borrow from itself .

Keynesianism’s critics argued that “excessive” government spending, by expanding the money supply, was simply sending too many dollars in pursuit of too few goods – the classic definition of inflation. Even worse, in its effort to create jobs, the State was “crowding out” productive investment in the private sector, leading to business-failures and job losses. In short, by attempting to create jobs, the State was, paradoxically, destroying them.

The Neoliberals’ prescription was simple, and to most people it sounded like plain common-sense. To rein-in inflation and reduce unemployment all a government had to do was: stop printing money; cut state spending; and give the private sector its head.

As the economy adjusted itself to this new “economic rationalism”, warned the Neoliberals, people would, unfortunately, be required to endure a little short-term pain. But they would definitely gain in the long-term. The private-sector was inherently more efficient than the State and was, therefore, ideally placed to guarantee all those who wanted them real jobs, at good wages, without inflation.

AS WELL ALL NOW KNOW, there was a little more to the Neoliberal prescription than that. And one man, the Polish economist, Michal Kalecki, had seen it all coming thirty-five years before it actually happened.

In an article entitled “The Political Aspects of Full Employment”, published in The Political Quarterly of October 1943, Kalecki wrote:

“The maintenance of full employment would cause social and political changes which would give a new impetus to the opposition of the business leaders. Indeed, under a regime of permanent full employment, the ‘sack’ would cease to play its role as a ‘disciplinary’ measure. The social position of the boss would be undermined, and the self-assurance and class-consciousness of the working class would grow. Strikes for wage increases and improvements in conditions of work would create political tension. It is true that profits would be higher under a regime of full employment than they are on the average under laissez-faire, and even the rise in wage rates resulting from the stronger bargaining power of the workers is less likely to reduce profits than to increase prices, and thus adversely affects only the rentier interests. But ‘discipline in the factories’ and ‘political stability’ are more appreciated than profits by business leaders. Their class instinct tells them that lasting full employment is unsound from their point of view, and that unemployment is an integral part of the ‘normal’ capitalist system.”

The loss of “discipline in the factories” – that was the real reason employers were so determined to rid themselves of Keynesianism. Under its full-employment policies there may have been some short-term gains (if you can call thirty years of unprecedented prosperity and growth “short term”) but in the long-term Keynesianism posed a deadly threat.

If allowed to go unchecked the power and confidence the State’s interventions had secured for working people would inevitably see it move beyond the provision of education, health and welfare services and into sectors of the economy where its enterprises would be competing directly with those of the private sector. To a limited extent this had already happened in the energy and transportation sectors. What would be next? Manufacturing? Retail? Finance?

For capitalists, the impetus which Keynesian full-employment policies gave to post-war social-democracy was frightening. In a sellers’ market for labour, trade unions had become a dangerous locus of economic, social and political power. The influence this afforded them in the political parties to which they were aligned was, by the early 1970s, seriously eroding the power of the top one percent of income earners. If the economic and social logic of full-employment advanced even a little bit further, the position of the capitalist elites would become untenable.

Something had to be done – and that something was Neoliberalism.

WITH THE PASSAGE of thirty years, it has become very clear (even to those who initially bought into Neoliberalism’s 1980s sales-pitch) that its promises of long-term gain were just another variant of “There’ll be pie in the sky when you die.”

The promised pain, on the other hand, has been all-too-real. A vast gulf of wealth and power now yawns between the beneficiaries of the Neoliberal “revolution” and its victims. The average working-class New Zealander is more indebted, earns less in real terms, feels more vulnerable in the workplace and is less secure economically than at any time since the Great Depression.

That being the case, it becomes extremely important for Neoliberal apologists to reassure the people upon whose political support Neoliberalism relies that the whole exercise has been a rip-roaring success.

Unfortunately for these apologists they can no longer use people’s lived reality to make the case for them. There is simply no way the conditions of the pre-Neoliberal era can be honestly presented as worse than those of the present. From the purchasing power of the average weekly wage to the lack of affordable housing for young families, the conditions of life for ordinary New Zealanders under Neoliberalism have got worse – not better.

As a consequence, Neoliberal apologists are forced to falsify the past: to create a narrative that unequivocally inverts historical reality.

This falsification of the past, in order to justify the ways of Neoliberalism to Man, has no more energetic champion than the New Zealand Herald columnist, John Roughan. In the paper’s Saturday’s edition (30/3/13) he calls for the closure of the Tiwai Point aluminium smelter – evoking, in justification, a quite extraordinarily tendentious, and just plain wrong, version of this country’s post-war history:

Acknowledging that “one or two” of his relatives have enjoyed “a lifetime of employment” at Tiwai, he concedes a debt of gratitude to the National Government of the 1960s for its decision to “turn hydroelectricity into aluminium ingots”.

“It might have been a good idea”, says Mr Roughan, “if the price of electricity had been right – the price we have never been allowed to know.

“The price of most things at that time was controlled or subsidised and nobody knew or cared that prices didn’t align the item’s cost of production to its value in a competitive market. The economy was a job-creation scheme that ended with double-digit unemployment in the 1970s.”

This is an outrageous falsification.

At no time during the 1970s did unemployment ever climb above 2 percent of the workforce. The highest unemployment total of the decade was recorded in 1979 when just under 25,000 people – out of a workforce of 1.3 million – were registered as unemployed. (Source: New Zealand Official Yearbook, Department of Statistics, 1983) In the year ended December 1974, the number of people registered as unemployed in New Zealand had numbered less than a thousand!

Of course Mr Roughan has no choice but to turn the 1970s into an unmitigated economic failure. To do otherwise would call into question the wisdom and efficacy of the entire Neoliberal Revolution. After all, the only time since the Great Depression when unemployment exceeded 10 percent of the New Zealand workforce was 1991 – the year of National’s arch-Neoliberal Finance Minister, Ruth Richardson’s “Mother of All Budgets”.

The extent to which Mr Roughan has succumbed to Neoliberalism’s absurd mythology is revealed in the next passage of his column. Here he compares Keynesianism to a steam-engine and Neoliberalism to an automobile!

“It was then that governments everywhere learned elementary economics. They realised an economy was not a steam engine that you stoked with as much money, labour, land and fuel that you could lay your hands on. It was more like an automobile that operated best for those inside it when the engine was tuned with precision.

The best method of tuning it, economists said, was a market price. A price set by competition and consumer choice would give each cog in the engine as much fuel, capital, labour and other resources it could efficiently use, and tell you which industries would boost the country’s wealth.”

Clearly those responsible for the Global Financial Crisis: all those expert auto-mechanics at Lehman brothers, Merrill Lynch, Fannie Mae, Freddie Mac, Washington Mutual, Wachovia, Citigroup and AIG were not at work the day those cogs and wheels ground themselves into piles of useless junk? A mess which only the despised State’s capacity to borrow from itself was big enough to clean up.

It is rare to encounter Neoliberal self-delusion on such an all-encompassing scale as Mr Roughan’s. Such egregious historical distortion should make us all very angry, but it can also, in a curious way, comfort us. What it reveals is an ideology entering the twilight of it reign: a system requiring only a few solid blows to send it crashing down.