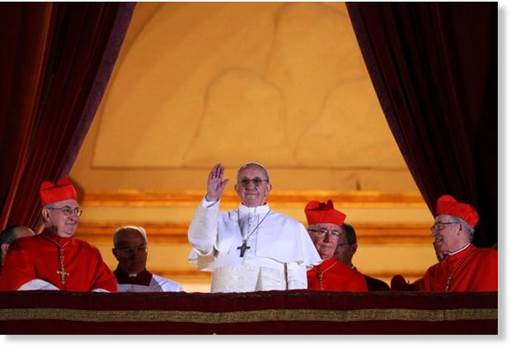 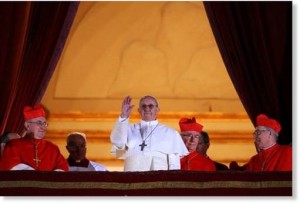 Enough to make him Pope Francis I.

In St Peter’s Square and throughout Latin America there was rejoicing. Born in Argentina, Bergoglio is the first non-European Pope to be elected since the Eighth Century.

And yet, in spite of the new pontiff’s origins, there will be many among the ecstatic crowds thronging the streets of Buenos Aries who harbour the deepest misgivings.

Just three years ago, when the Argentine legislature was debating its own Gay Marriage Bill, the then Cardinal Bergoglio denounced the measure in the most unequivocal terms.

In language which the Argentine President, Cristina Fernández de Kirchner, said reminded her of the Medieval Inquisition, Bergoglio declared:

Behind the humble bus-rider of Vatican publicity; behind the warm grandfatherly smile; Francis I remains as much a prisoner of reactionary Catholic theology as John-Paul II and Benedict XVI.

And according to the research of Horacio Verbitsky, one of Argentina’s leading investigative journalists, Bergoglio’s reactionary beliefs are not confined to the issues of homosexuality, abortion and contraception. Francis I is also a political reactionary.

Forty-three years ago Argentina entered one of the darkest periods in its history. A military junta, having seized power from an unstable right-wing populist government, launched what came to be known as “The Dirty War”. Argentine Military Intelligence (itself deeply implicated in the process) estimated the number of Argentinians murdered, tortured, or simply “disappeared”, at 22,000. Civilian estimates put the toll much higher, at 30,000.

The Dirty War lasted seven years (1976-1983) and convulsed the whole of Argentinian society. The military strongman, General Jorge Rafael Videla, believed he was waging war not simply against left-wing revolutionaries and trade unionists, but against the whole tide of social and sexual liberation rolling out of the 1960s and early 70s.

And he had allies.

Hugh O’Shaughnessy has been reporting Latin American politics for 40 years. In the Guardian of 4 January 2011 he wrote:

“To the judicious and fair-minded outsider it has been clear for years that the upper reaches of the Argentine church contained many … [individuals] … who had communed and supported the unspeakably brutal Western-supported military dictatorship which seized power in that country in 1976 and battened on it for years.”

“The Argentine navy with the connivance of Cardinal Jorge Bergoglio, now the Jesuit archbishop of Buenos Aires, hid from a visiting delegation of the Inter-American Human Rights Commission the dictatorship’s political prisoners. Bergoglio was hiding them in nothing less than his holiday home in an island called El Silencio in the River Plate. The most shaming thing for the church is that in such circumstances Bergoglio’s name was allowed to go forward in the ballot to choose the successor of John Paul II. What scandal would not have ensued if the first pope ever to be elected from the continent of [South] America had been revealed as an accessory to murder and false imprisonment.”

That scandal has now occurred.

A scandal of which the College of Cardinals could not possibly have been ignorant, but which it considered of insufficient importance to prevent Bergoglio emerging as the “runner up” to Cardinal Ratzinger (Benedict XVI) in the Conclave of 2005.

A scandal which, in a Catholic Church riven by so many scandals, was completely invisible to the College of Cardinals in 2013.

Even though, the Princes of the Church, gathered in Rome, had only to flip open their lap-tops and Google “Bergoglio” to learn from Wikipedia that:

“On 15 April 2005, a human rights lawyer filed a criminal complaint against Bergoglio, as superior in the Society of Jesus of Argentina, accusing him of involvement in the kidnapping by the Navy in May 1976 (during the military dictatorship) of two Jesuit priests. The priests, Orlando Yorio and Francisco Jalics, were found alive five months later, drugged and semi-nude. Yorio accused Bergoglio of effectively handing them over to the death squads by declining to tell the regime that he endorsed their work. Jalics refused to discuss it after moving into seclusion in a German monastery.”

In Matthew’s Gospel, Jesus says to his most trusted disciple:

“And I say also unto thee, That thou art Peter, and upon this rock I will build my church; and the gates of hell shall not prevail against it.”

Maybe not, but with the elevation to the Papacy of Jorge Mario Bergoglio, the gates of hell have come perilously close.