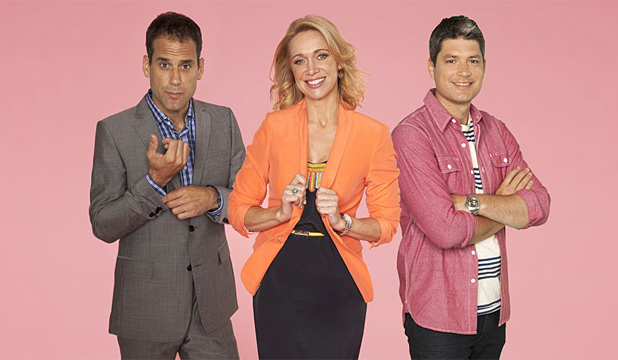 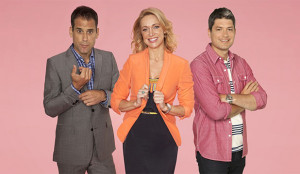 Possibly more was said beforehand of TVNZ’s flagship 7 o’clock replacement to Close Up and the news walrus than has been said afterward – such has been the prolonged anticipation and such has been the underwhelming reaction. With the Head of News and Current Affairs bolting back to Aussie – deserting his own project – the death star was without a commander and the 7 Sharp thing was sinking before it was launched. An inauspicious and almost certainly ill-fated commencement to a concept hatched in marketing with as little as a cut out of the Herald’s Sideswipe column as an editorial direction.

The patronising promos lowered the expectations, but not enough for what we have seen so far. Declaring in their ads that it would be dumbed down because the world’s all a bit confusing for people was a bold show of the marketing department’s hand- a deathly hand wringing creativity into the drain. The combination of colours (turquoise and pink), font (some bastard sister to comic sans), and the weak content indicate a demographic idealisation via committee that in real life is an unpalatable mess. Throw in social media and the mess becomes an utter tip. If you were watching it on the internet you would want to turn the subtitles off – but on TV the torture of the intrusion is too much.

TV should be TV. TV trying to be the internet – as they seem to be attempting – will not work. They promise in their introduction of buzz words that may appeal to their younger demographic what the show will be – unfortunately they do exactly that. They have created the worst of all worlds by trying to include feedback. A stream of distractions appear on screen and compete for attention with the hosts. The hosts compete with each other for attention. The viewer meanwhile is already watching John Campbell. Now there’s a star. He interviews proper people like government ministers and newsmakers about proper things like the economy and world crises – and contrary to the position of 7 Sharp to cater for the mythical female 18-35 who likes to turn their brains off after the news people would prefer real current affairs and not whatever it is TVNZ is doing. They are quickly learning this lesson via the brutal ratings result for the new vehicle.

The three hosts looked rather subdued most of the time: Jesse Mulligan like he swallowed a jar of Prozac, Boyd like he swallowed a rugby ball which is still lodged in his jaw, and Ali Mau doing very little to lift the standard. If they are to salvage the show they have to gel together and carry the ultra-lite parade of 15 minute of fame schmucks and cute animals with their personalities. But where are they? Choked off by nagging in earpieces? Is that why Mulligan’s comedic verve is on ice? Boyed thinks he’s great but the jerky speech is grating. Ali, well, she’s lovely. But really – why watch?

Who are these three hosts? They are a paranoid reaction to the mega-pay days of Holmes and Hawkesby that ended with a virtual ban on nurturing and promoting personalities as personalities because of the potential negotiating imbalance. They are simply too timid to back a personality. Some would argue – strongly – that even more simply there is no talent at TVNZ.

There is just nothing memorable coming from 7 Sharp. Compare Holmes’ debut with 7 Sharp. Nothing memorable – and there won’t be. The hex of social media and the hamstringing of the hosts by TVNZ’s anti-personality policy and whatever the entrails at the marketing meeting have divined add up to an unconvincing show. It has a light setting as opposed to Campbell’s night-time, so at a guess they will phase it out in the winter and replace it with something harder. That is what people want.

Editors note: I have just had a chance to get to this – sorry for the delay. This was an early draft that wasn’t vetted thoroughly enough for the language to fit with the values of the site. It has been now. Sexist jokes and language are lazy and dull.