Isn’t it awful when an amazing news story comes along and the journalist’s ineptitude and lumbering craft ruins it?

Read her story on NZs first woke murder and you actually have no fucking idea what is going on in the story! 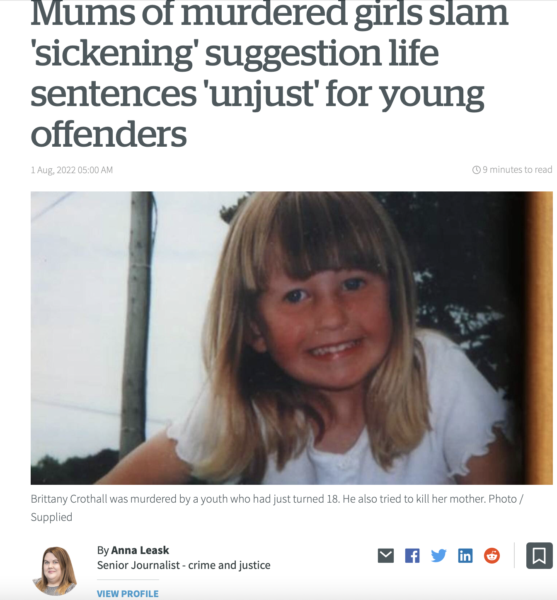 …Leask brings in two mothers who have nothing to do with this story and pretends that’s journalism!

I can’t tell if Anna Leask is just a terrible writer or she wants to ignore the magnitude of NZs first work murder.

Oh you don’t know about NZs first woke murder? Oh allow me to outrage you because TDB was all over the murder when it happened 4 years ago.

The trial for the brutal gutting and murder of Invercargill teenager Jack McAllister occurred in 2018 and was conducted by a group of woke warriors who decided McAllister was guilty of sexual harassment and as punishment, this team of woke warriors decided to trick him to a location and butcher him because you know, heteronormative white cis male patriarchy hashtag MeToo…

Crown lawyer Riki Donnelly told the jury in his opening address that all five played a part in the 19-year-old’s death, including luring him to the stadium and lulling him into a false sense of security, providing a vehicle to get to the scene, or encouraging others with words and actions.

Donnelly said another man, Brayden Whiting-Roff, who has previously pleaded guilty to a charge of murdering McAllister, was the principal assailant who stabbed McAllister.

McAllister was lured to near the stadium with a promise of sex, Donnelly said.

There was significant animosity held by prominent members of the group towards Jack McAllister, Donnelly said.

The animosity was based on the belief he had acted inappropriately towards females and towards some members of the group and others they knew about, he said.

…this was probably our first woke murder, and I have to be honest, the case fascinates me so much, I’m seriously thinking it should be made into a film.

Alison Mau should play one of the gangs mothers.

The self importance of the 6, their desire to be judge. jury and executioner, luring McAllister to a stadium using the promise of sex only to murder him…

McAllister, also known as Jade Fearn, was attacked near ILT Stadium Southland on June 7, 2017, and died in hospital early the next day.

It would be clear during the trial that a number of defendants were “out to get” Jack McAllister prior to June 7, Donnelly said.

He said Whiting-Roff had posted: “I’m going to f… him up”‘ and “IDGAF (I don’t give a f…) what anyone says. He is worth going to jail for. Pigs aren’t doing anything. I will catch you up Jack.”

Brown had posted a Facebook message that evening asking “Where the f… are you … McAllister?”

Scheepers had responded: “Me bro, I know”.

She had, separately indicated to other defendants at Subway that evening that she would get McAllister to come somewhere.

She messaged him asking if he was keen to f… and suggested they meet around 11pm at Surrey Park “bleachers” – the grandstand to outdoor sports stadium next to Stadium Southland.

…I don’t know why, but this story of a gang of 6 deciding to take justice into their own hands based on nothing more than allegation really says something about where NZ culture is right now.

As for these woke killers claims they were too young and precious to know right from wrong, the trial is peppered with them all planning and plotting this murder to punish a Me Too criminal, they seemed to have a lot of premeditated moments to have stopped the murder of Jack McAlister.

By avoiding calling this the first woke murder in NZ, journalist Anna Leask ignores the pure madness of woke Lynch mobs in favour of mum ‘feels’ about a murder that has nothing to do with them.

Folks, you can read it here first on The Daily Blog, or wait for the mainstream media to launder the story to make it acceptable to the gelded news rooms of NZ. 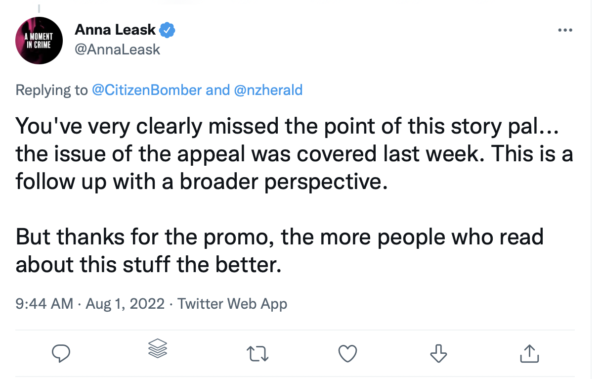