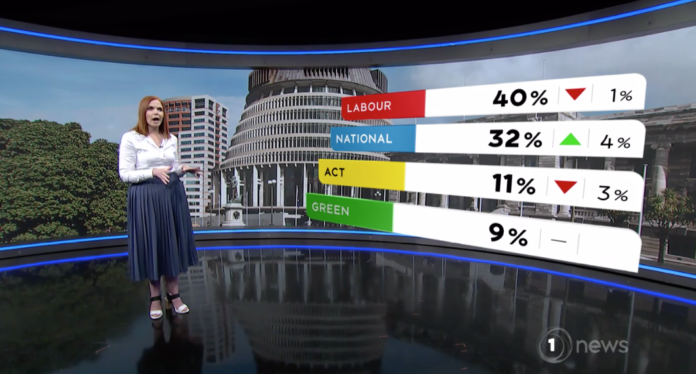 The State Broadcaster has remarkably woken from its holiday slumber to put out a Poll from their golden plush velvet star chamber before rolling back to sleep.

Has TVNZ Breakfast even returned to screens yet or are they still enjoying their taxpayer funded holiday? I imagine them all rehearsing their Tik Tok dancers in Scrooge McDuck’s vault under Radio NZ where the sound of native birds taught to sing in Te Reo (at enormous cost) is constantly piped in while Jenny-May, Matty and Jenny laugh with the freedom of knowing you’ll never get fired from a Government job.

Is it back on air?

Christ knows, anyway – here is the first Poll of 2022, there are of course Winners & Losers

Labour & Jacinda: After making some of the hardest policy decisions any peacetime Government in NZ history, after ruthless never ending vile attacks by fanatics and lunatics and a media narrative so negative it feels like Cameron Slater is running the editorial teams, Labour are still on 40%?

The vast majority of Kiwis still back Jacinda’s approach and are still grateful.

The Caucus will be privately chuffed as they had been shown at their retreat UMR polling that had them at 38.

Christian Vote: The Christian vote in NZ never goes anywhere because it’s split between too many Christian parties that never get over 5%, it’s the reason Judith did that hokey staged prayer last election. In Luxon, fanatical Christians see a Hand Maid’s tale level anti abortionist and a count down to rapture. Christian Lex Luther is their man and that’s what is fueling his surge.

ACT: I think ACT were unfairly stung by Luxon, he hoovered up all the sub 5% Christian vote and the math shrunk ACTs gains. If you look at the urban vote, ACT have enormous dominance in the 18-59 male demo market and I just can’t see Christian Lex Luthor appealing to them.

The naked truth is Seymour is actually cool in comparison to National, when the media breathlessly reported that Clarke Gayford had given speaker phone advice on testing, National wagged its finger and Bishop intoned that deeply inappropriate where as Seymour cheered Clarke on for promoting RATs!

Likewise when Seymour handed Luxon his Christmas Card last month, it had Simon Bridges name crossed out on the front.

ACT are just cooler than National.

ACT will gain two huge culture war set pieces in the form of the Hate Speech legislation and the Royal Society kangaroo court for Woke heresy which ACT will be able to weaponize.

National: Luxon will have trouble bringing back the Labour female voters that supported Helen Clark that Key seduced but Jacinda won back in 2020!

This 200000 block of 45+ year old women see in Jacinda an empowerment of female leadership that won’t feel at all tempted by a rich evangelical CEO Handmaid’s Tale level anti-abortionist.

That’s not to say Luxon will fail, there is a deep polarization of NZ society but he’s unlikely to get National above 35% on Election Day.

Greens: Despite Labour failing on poverty, housing, meaningful climate change and inequality, the collection of middle class Woke virtue signals that are the Greens are about as electorally viable as a cup of cold sick being sold as vegan beer.

I’m forever embarrassed that I vote for them. They are my team and I just wish they would disband.

NZF: When Winston claimed Harry Tam had snuck a Covid infected sex worker throughout the North Island and that Labour knew about it , little would he suspect how it would become the weirdest political suicide note in NZ history.

Tova: Can anyone seriously believe that no one in Today FMs management would have checked Tova’s restraint of trade clause and got it so wrong? Of course we can! This is a company who program music for Teenagers who are too poor to pay for Spotify premium and for Boomers too frightened to know how to use Spotify premium, that they missed something as huge as their new stars start date is if no surprise at all. The best bit was when Tova tired to turn it into a ‘you go girl’ hashtag feminism play by going to the employment court to have Discovery ‘ungag’ her only to get fined $2000 for making an advert for her new job while still being paid by her old job. Tova would be all over this new Poll if she was starting next week. She’s not.

I’m 90% confident that Labour + Green will win in 2023, but the unique attributes of MMP may come into play in Auckland that sneaks a victory to ACT & National.

I think it’s entirely plausible that National wins more electorate seats than Party vote in 2023 because I think a lot of reactionary male vote in Auckland may well vote National as the electorate vote but will party vote ACT.

I can see National winning back Auckland electorate seats while losing party vote which will cause a huge overhang in our MMP election which will increase the size of the Parliament and make getting 51% far more difficult for Labour and the Greens.

MMP Overhang could be the deciding factor in a razor close 2023 election.

The biggest question is how the cultural shockwave of 80000 sick per day plus 400 dead by April impacts things.

Omicron could either rally people around Jacinda as we finally realize via direct experience that she was right all along or it could turn the nation against them as we collectively flail around to find someone to blame.