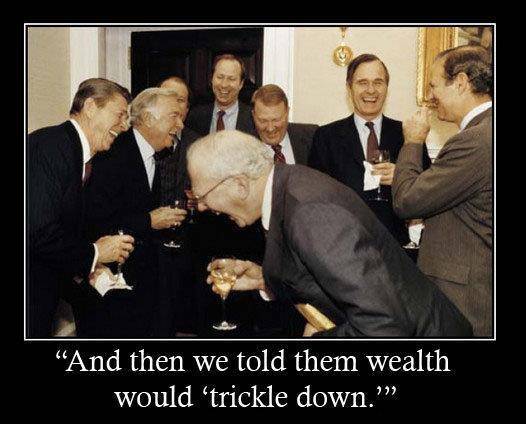 “The great vampire squid stuck on the face of humanity, relentlessly jamming its blood funnel into anything that smells like money.”

He was of course writing about Goldman Sachs, But Taibbi’s essay could just have easily be written about the Aussie banks that suck $3.5 billion out of the New Zealand economy every year.

It is these Aussie owned banks that have profitted the most from New Zealand’s unafordable house prices and the usurious levels of mortgage and rental payments extracted from New Zealanders to pay for them.

When the pandemic hit this country – to stop the spread of the virus the government put the whole country into lockdown, effectively putting New Zealand’s normal economic activity on hold, all except one part, the profit taking of the mostly foreign owned Aussie banks.

In the depths of lockdown, when everyone else’s livelyhoods were constrained, or even stopped, the Aussie banks blood funnel never missed a beat pumping out money from our pockets and out of the country.

It was not the Lockdown itself, rather it was this continued relentless extraction of mortgages and rents, when no income was coming in, that imposed the most misery and hardship on small businesses and families.

To halt the spread of the virus, non-essential economic activity was frozen, to share the burden equally, all non-essential economic activity should have been frozen, including mortgage and rent collection. To make lockdown more bearable this should have been done from the very First Level 4 Lockdown, and probably continued into Level 3 lockdown as well.

Such a move is not unprecedented:

…..by 1931, it was clear that further intervention was necessary to prevent widespread foreclosures and mortgagee sales…..

….Although mortgage relief was frequently discussed at some length by
contemporary commentators, and by some historians in the 1950s and
1960s, it has been relegated to a few lines at most in more recent works.’

…..This Act also extended to lessees [renters] the same protection
that had been granted to mortgagors,

The modification of mortgage conditions was not new in New Zealand. A ‘mortgage moratorium’ had been imposed as a war measure in 1914,

But why is this still important?

Medical experts and epidemiologists have said that the government’s decision to take Auckland out of Level 4 lockdown when the virus was still circulating was, “a gamble”, “a line call”,  “a risk”.

So why couldn’t we stay the course and eliminate the virus?

Because we have a parasite stuck on our face that won’t let us.

We are told that we can’t have any more lockdowns because the hardship on small busines and households is too great.

The last lockdown was lifted early before it had done its job for the same reason.

In a lockdown all our incomes are constrained, all except for the Vampire Squid.

Now imagine if the Vampire Squid’s income was put into lockdown too.

The hardship on the rest of us would not be so great, in fact for most of us, the lockdown wouldn’t be a hardship it would be a holiday, it would be something that we would look forward to, because for a short period the Vampire Squid would be lifted from our face and we could breathe freely for a little while,

Without the Vampire Squid’s suffocating embrace, we could see out another lockdown to the virus is eliminated again.

“The other great thing about a rent and mortgage moratorium, is that it won’t cost the tax-payers a cent.”