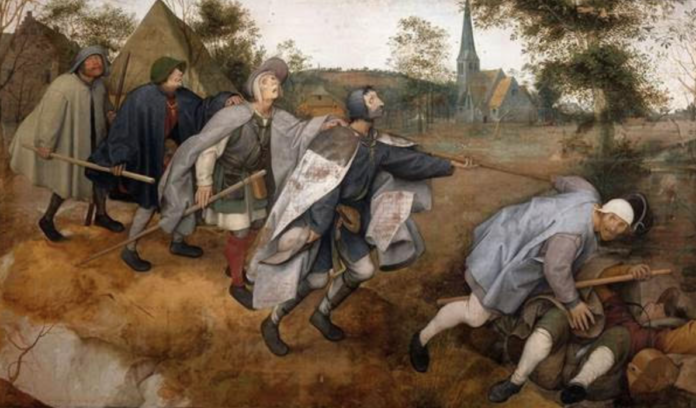 I’VE BEEN RACKING my brains for an historical parallel to the strange and disturbing times we’re all passing through. Because these are strange and disturbing times. Beliefs and expectations once considered rock solid melt into air (to borrow Karl Marx’s magnificent phrase) and new beliefs and expectations, emerging with dizzying speed to replace the old ones, are promoted and defended with a frightening fanaticism. When was the last time human-beings went through such a period? More importantly, how did it end?

The first place to go looking for an historical parallel is, obviously, among the great revolutions of the modern era: the French, the Russian and the Chinese. Almost by definition, these were periods of tremendous turmoil during which a significant portion of the entire population was swept up and into a vast national movement demanding decisive and fundamental change.

In the first instance, these revolutionary movements were dedicated to the removal of present evils, and to the overthrow of the political and economic forces deemed responsible. Once achieved, however, the question of what should replace the old order swiftly undermined the people’s unanimity and, in circumstances of mounting horror, the Revolution began to devour its own children.

Tempting though it was to append the word “revolutionary” to the period we are living through, I felt obliged to reject it. After all, New Zealand is not being rocked by tremendous turmoil from below. Those on the receiving end of the policies responsible for homelessness, child poverty, precarious employment and crippling indebtedness are not rioting in the streets. Nor do we see political firebrands urging them on to storm New Zealand’s equivalent of the Bastille. (The local WINZ office, perhaps?) Though revolutions are, more often than not, led by “declassed” intellectuals, they are always and everywhere massive eruptions from the social depths. Intellectuals may lead revolutions (and, more often than not, bury them) but they are made by “the people”.

If we are not living through revolutionary times, then what sort of times are we living through? Is there another great historical era that bears comparison with our present period of intellectual and moral ferment? While finding an exact historic parallel is, obviously, an impossibility – no two periods of history are exactly alike – there is an era that rings more than a few bells: The Protestant Reformation.

Generally agreed to extend from 1517, the year in which Martin Luther protested (hence the term “Protestant”) the abuses of the Catholic Church; to 1648, the year in which the Treaty of Westphalia brought the catastrophic Thirty Years War between Catholics and Protestants to an end; the Reformation marked a crucial turning-point in the spiritual, political, social and economic history of Europe.

The medieval concept of “Christendom” – the united community of Christian believers presided over and guided by the Catholic Church – did not survive the Reformation. In the countries of North-Western Europe, where it triumphed, Protestantism ushered in the individualistic mindset which was to prove so crucial to the development of capitalism and the evolution of modernity.

What the intellectual stresses and strains of our own time have in common with the Reformation period is that they both originated in what might be called crises of confidence in the moral underpinnings of the established order. Intellectuals, almost all of them what would today be called “academics” (but who, in their own time, were concentrated in the institutions of the Church) were losing faith in the “official” version of the Christianity handed down from above, and began conceptualising a radically new, deeply personal, relationship with God, founded on scripture and unmediated by the spiritual agents of the Church.

It was Martin Luther, and the followers he inspired, who gave this radical movement coherent vernacular expression and, by using the “new technology” of the printing press, were able to communicate the new protestant doctrine to educated middle-class audiences across Europe with unprecedented speed.

If this was a revolution, then like the radical intellectual movements of our own time, it was a revolution of the mind. Incidental to the protestant reformulation of the spiritual, moral and political Christian narratives, were deeply personal religious insights and emotions. Experiences that were in no way subject to secular compromise. In the sixteenth and seventeenth centuries, individuals conceptualised these powerful feelings as emanations of their “soul” – the survival of which overrode all other considerations. To save their souls, protestants were prepared to both endure – and inflict – persecution and martyrdom.

Today, these powerful emotional experiences and insights are said to constitute the individual’s “personal identity” – a concept which, like the soul, our twenty-first century metaphysical reformers will go to extreme lengths to preserve, protect and defend.

Moreover, and just like their protestant predecessors, these identarians are socially and institutionally positioned to ensure that their new “truths” are entrenched in the legal and institutional frameworks of the nation state. Racial and sexual identity issues encompass both the personal and the political. The salvation of the self and the salvation of society cannot be separated. Heresy and heretics are deemed intolerable. They must be silenced.

Unquestionably, the differences between the identarians of today and the protestants of 500 years ago vastly outnumber the similarities. Nevertheless, like our own time, it was a period of extraordinary intellectual stress and strain. At stake were ideas and expectations about which people were simply unwilling to compromise. How could they, when at stake was the very essence of what they believed themselves to be, and the creation of a world in which that essence could survive and thrive?

How did it end? Badly, I’m afraid. The wars that were sparked by the Protestant Reformation, and the inevitable “Counter-Reformation” of the Catholic Church, killed millions. The German territories, which supplied the principal battlegrounds for this vicious religious conflict, are estimated to have lost a third of their inhabitants. Ultimately, Protestants and Catholics agreed to differ. Strange and disturbing times seldom end any other way.