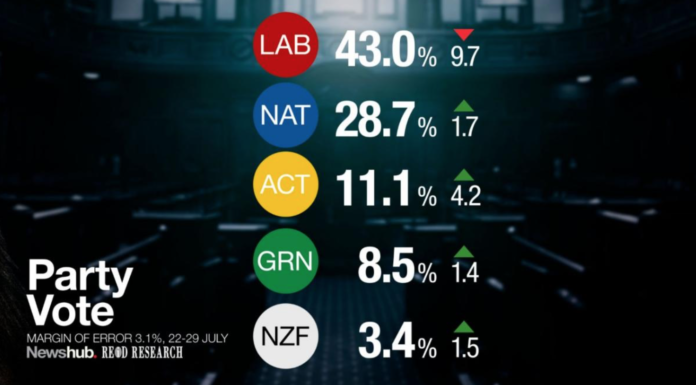 This Poll was always going to slam the Left.

The sudden slump in one month of 9points by Labour is fucking significant but what is most telling is ACT jumping up to the third largest party stakes.

There is real danger here.

This wasn’t the Farmers protesting because men in Utes don’t vote Labour.

This wasn’t angry Nurses because they never vote ACT.

This wasn’t angry property speculators because they already vote National and ACT.

Oh no, this is the suburbs turning on Jacinda.

Social media is ubiquitous and everyone has seen woke activists lynching people as care free as the street fights of the 1930s.

They are leaving on principle and Labour are hemorrhaging votes.

This isn’t economics, this is cultural war.

Left Wing Males – The Right can’t win back the 45+ women who Jacinda inspired with her Covid Leadership – they are emotionally melded to Jacinda. What the Right can do is target left wing males who are already feeling alienated by the grim identity politics. Expect left wing males to be the new target of Right wing propaganda.

David Seymour – TDB has been predicting for sometime that ACTs rise is no fluke or protest vote, but instead a seismic shift on the Right which seals National into a political death spiral. ACT is the right wing values party now. Freedom of speech, gun rights, cancel culture – these became rallying calls for disaffected right wing vote who were sick of National’s social conservatism and yearned for a modern values based right wing politics. ACT have stepped into that culture war gap and as debate polarises, they will cannibalise Nationals vote and are better at culture war value positions than National whose openly racist dog whistles are ham fisted and banjo twanging. While Seymour is Leader, this reactionary right will stay within the spectrum of decency however if one of those vile social climbers beneath him took over as ACT eclipsed National, we are in for trouble. The magnitude of how far right ACT are isn’t acknowledged while they’ve been fringe but this will come to a head in 2023 when ACT vs Labour-Green are the parameters for a vastly more polarized political debate.

Winston Peters – If he’s on 3.4% now he is certainly over 5% by Election Day. Will sell himself as a handbrake on Jacinda while making the Greens irrelevant.

Simon Bridges – Judith’s brutality in forcing out MPs to ensure she has a naked Caucus majority now terrifies more MPs than Simon Bridges possible  punishment for the Muller disloyalty. Bridges’ book on masculinity this month weeks after the National conference is timed to ensure if there is a coup his name is at the top.

Culture war politics – The idea that the State will judge your words in a cultural landscape dominated by easily triggered millennial micro aggressions is as socially anxious as Jacinda personally breaking into your kitchen to police healthy lunch boxes live on TV with an outraged John Campbell calling for your immediate arrest for the inclusion of gluten. Because social media is ubiquitous, people are watching the woke lynch mobs gleefully cancel movies they haven’t even seen with pre-censorship, they are watching the inconsistency of woke culture by banning the Charlie Chaplin musical but then putting on one produced by Harvey Weinstein, they are watching unleashed woke desire to punish all those who disagree with them. Now they see the Police handed the power to arrest you for words construed as racist, sexist or transphobic by woke activists whose starting point is all white peoples are racist, all men rapists and anyone defending free speech is a Nazi. Drop a drip of power onto your average Middle Class Identity Politics Spinoff/Stuff subscriber and they mutate into a thousand Tiny Hitler’s, a phalanx of little sisters whose eyes gleam with the same Dogma Cult of Mao’s Cultural Revolution. The Left’s activists are more concerned with cancelling voters than recruiting them.

Maori Party – Their ongoing ability to speak up Maori aspiration continues to build them towards bringing in another MP off the list as their Party Vote grows.

Greens – With Winston back, Greens lose all leverage and will become politically irrelevant again. The Greens have gone so far down the Woke hole that I don’t believe there’s any coming back for them now. Middle class identity politics has utterly over run their Party and I just don’t believe they can ever return to an environmental party with a view to fix the economy. It’s all woke virtual signals as policy and they aren’t actually serious players beyond pure temple woke dogma.

Maori bashing – With National gaining no traction on their ham fisted racism via segregation crap, it’s time to admit that most Kiwis under 50 know enough about the injustices of our past that they don’t see co-governance as separatism. Give it up Judith.

Woke activists – They are incandescent with rage that their noble pursuit of Social Justice and moral bullying through woke cancellation is becoming so toxic that they are alienating voters and they will punish those stupid voters, punish any commentator who points that dynamic out and any MP who tries to push them away. The woke have become the Tea Party but with less guns.

Hate Speech laws – The Edgeler has spoken, no purge for the wokies.

Putting a parent in prison for 5years for stopping their child from taking puberty blockers – Personally I can’t see any justification whatsoever to waste legislative time on woke virtue signalling when we have 190 000 children in poverty, 4000 kids living in motels, 22512 people waiting on emergency housing, generations locked out of home ownership, the largest spike in inequality since Feudalism and a planet on fire. But hey that’s just me. Criminalizing Christians is one thing, criminalizing parents who stop their teenagers from using puberty blockers by putting them in prison for 5years is another fucking world!

The adults of the Left inside Jacinda’s Office have to punish the Political management of this and the bullshit woke social engineering crap.

Locking people up for 3 years in prison for hurting a millennials easily triggered feelings means we are going to have a million in prison.

Locking parents up in prison for 5 years for stopping their kids from taking puberty blockers is fucking insane let alone political cyanide.

Labour’s 9point plunge and ACT at never before highs is a direct response to woke backlash – TDB have been warning about this since 2020 election – jailing people for 3 years by criminalizing free speech and 5 years for blocking puberty blockers will only win votes for ACT.

Jacinda needs to announce a Cabinet reshuffle and announce a new agenda moving forward after listening to the people.

Labour need to start delivering above keeping Covid out. It needs policy that directly impacts people’s pockets and gives them hope that there can be a better planned future.

Woke virtual signals and an online activist base who make piranhas look kind is poisoning the Labour brand.