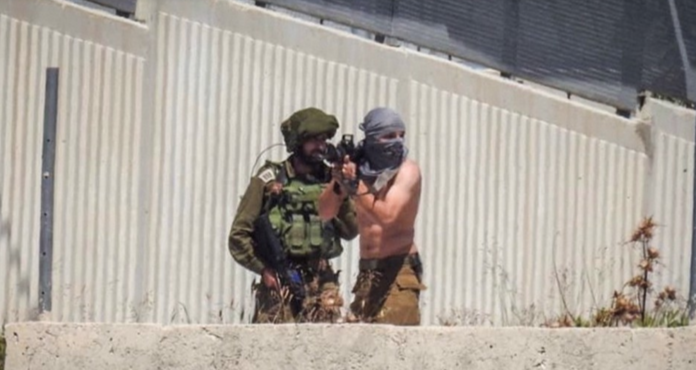 Israel’s Gaza ceasefire violations continue to go unreported by the mainstream news media. From 6-21 July (inclusive) there have been 15 further such violations, including another three Israeli Army incursions into the Gaza Strip as well as attacks on Palestinian agriculture and fishing boats. The relentless daily assaults on Occupied and blockaded Palestinians unleashed by Israel‘s Army, Air Force, Navy and settlers are simply kept under the radar. A video filmed by the Israeli human rights group B’Tselem and referred to in an article in the Israeli newspaper, Haaretz shows a masked Israeli settler fatally shooting Palestinians who posed no threat, while amused Israeli soldiers stand by, watching. Had it been recorded anywhere else but in Palestine such a video would certainly have proved newsworthy and would have been broadcast, with the usual caveat that ‘some viewers might find it distressing‘!

B‘Tselem works, along with many other human rights movements in Israel and around the world, to raise public awareness of Israel’s behaviour and the plight of its victims. The human rights organisation Wellington Palestine, is the organiser of a petition, End the detention and abuse of Palestinian children, which was presented in March at Parliament to Golriz Ghahraman MP, with a film-screening viewed by a number of MPs and NZ Government Ministers. This month, our Government responded to the petition with the promise to “continue to regularly raise specific human rights concerns directly with Israel”. Its acknowledgement that Israel’s behaviour towards the Palestinian people raises human rights concerns is significant and welcome but sadly inadequate. Failure to call Israel to account has enabled the Zionist regime to commit gross violations of international law and inflict decades of human rights abuses upon Palestinians. In spite of all their ‘concerns’, New Zealand’s Five-Eyes traditional allies continue to guarantee Israeli impunity. For example, the UK’s “staunch, unwavering support” for Israel remains, even though its government spokesmen cannot deny Israel’s gross violations of international law.

The UK Government has conceded that the Government of Israel did authorise the demolition of Palestinian homes, acknowledging that this constituted violations of the Fourth Geneva Convention and caused “unnecessary suffering to Palestinians.” Similarly undeniable is evidence released in a Defence for Children International–Palestine report revealing the killing of Palestinian children by Israeli Occupation forces and settlers. The New Zealand Government’s response to the Wellington Palestine petition has an all-too-familiar ring. Western-aligned politicians and governments know very well what is going on but put strategic and economic interests before human rights. It is going to take resolute, daily, pressure and exposure to get our own government to take the action needed to effectively uphold international law and human rights. There have been calls for an international peace keeping force on the ground in Palestine. The United Nations certainly has the responsibility to defend the Palestinian people and it is to the UN that an appeal such as this needs to be made. International humanitarian law must be safeguarded and the removal of foreign military Occupation is essential for peace and justice to prevail.

The Palestine Solidarity Network Aotearoa (PSNA) in its latest newsletter sees 2021 as the turning point in the campaign for Palestinian human rights, noting that “Israel’s racist narrative is running out of steam with public sympathy and support rising for Palestinians.” In respect of the 40th anniversary of the 1981 Springbok tour of New Zealand, the newsletter also contains a full list of Palestine Solidarity meetings around the country to mark that occasion.

Following the end of Second World War in 1945, the United Nations was created with “one central mission: the maintenance of international peace and security.” The UN website describes its purpose as one to “Maintain International Peace and Security.” There is an abundance of General Assembly resolutions, which require a two-thirds majority to pass, that condemn Israel’s abuses of Palestinian human rights and international law. Under Chapter VII of the UN Charter, the UN Security Council has the power to take enforcement measures, ranging from economic sanctions to international military action, in order to maintain international peace and security and respect for international law. New Zealand and its traditional Western allies are not just signatories to UN human rights agreements, such as the Fourth Geneva Convention, we are by definition also their guardians. It is sad that any UN member state government should find it necessary to “repeatedly call on Israel to abide by its obligations under international law”, with regard to the unlawful killing of Palestinians, but that is the reality. There is, unquestionably, an urgent need to persuade Israel to respect human rights and abide by its obligations under international law. What is the New Zealand Government’s policy in this regard? The Boycott Divestment and Sanctions (BDS) movement sets us an effective example. Jewish Voice for Peace sees it as a way to “stand shoulder-to-shoulder with Palestinians in their non-violent struggle for freedom, justice and equality.” Another example of putting justice first is the announcement on 19 July by Ben and Jerry’s that it will no longer sell ice cream in the occupied Palestinian Territories. The decision by this US, Vermont-based enterprise is significant. The PSNA notes that the decision “may be linked to last week’s request from the UN Special Rapporteur, Michael Lynk, for countries to recognise Israel’s sponsoring of Israeli settlers on Palestinian land in the Occupied West Bank as “a war crime under the Rome Statute of the International Criminal Court.”

The Zionist enterprise sees its Occupation settlements as an integral part of Israel and intends to keep expanding them. Scores of US states that have enacted anti-BDS laws will no doubt be called upon by a furious Israel lobby to enforce them against the Ben and Jerry’s ice cream company. But this could actually open a new chapter in the struggle because it could lead to a US Supreme Court ruling striking down the laws as gross infringements of US First Amendment rights. In 2016, the PSNA notes, “the last National-led government co-sponsored United Nations Security Council resolution 2334 which declared Israel’s illegal settlements to have no legal validity and constitute a flagrant violation of international law”. Why has the New Zealand Government, since then, fallen so quiet? Our Minister of Foreign Affairs has been written to and PSNA is expecting the Government to at last speak out.