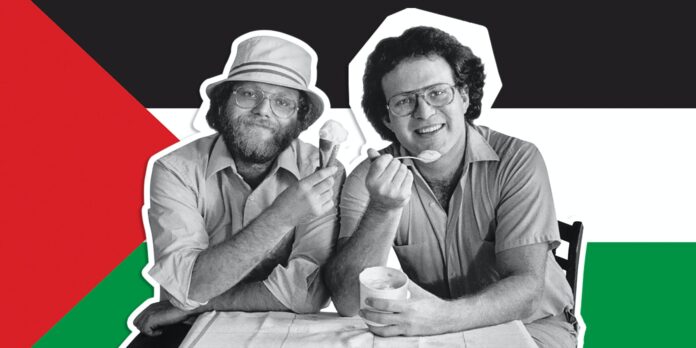 US Ice Cream manufacturer Ben and Jerry’s has announced it will no longer sell icecream in the occupied Palestinian Territories.

This is a welcome development while Israel is continuing to flout international law with their new government approving the building of 31 more illegal Jewish-only settlements in the occupied West Bank alongside the destruction of Palestinian homes and on-going ethnic cleansing of Palestinian families from occupied East Jerusalem to make way for Jewish settlers.

It appears this move may be linked to last week’s request from the UN Special Rapporteur, Michael Lynk, for countries to recognise Israel’s sponsoring of Israeli settlers on Palestinian land in the Occupied West Bank as “a war crime under the Rome Statute of the International Criminal Court.”

The Special Rapporteur calls these settlers (680,000 across almost 300 illegal settlements) “the engine of Israel’s 54-year-old occupation, the longest in the modern world”.

This UN report gives the government the opportunity to make public New Zealand’s abhorrence at these ongoing racist policies against Palestinians.

New Zealand has been silent since 2016 when the last National-led government co-sponsored United Nations Security Council resolution 2334 which declared Israel’s illegal settlements to have “no legal validity” and constitute a “flagrant violation of international law”.

The next step – as requested by the United Nations last week, is for New Zealand to declare this Israel settler policy as a “war crime”.

Five years of silence is complicity with Israel’s war crimes. It is not acceptable.

PSNA wrote to the Minister of Foreign Affairs about this yesterday. We are expecting the government to speak out.