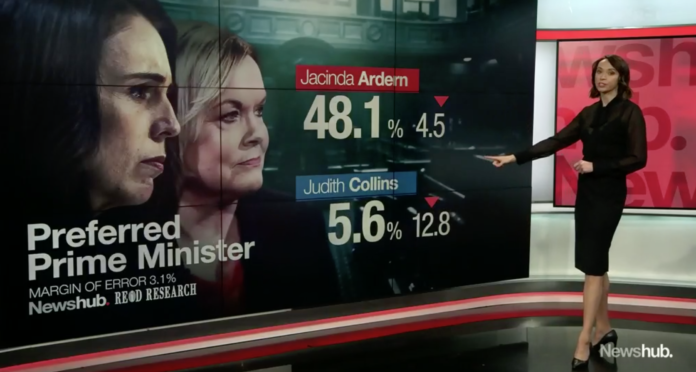 TV3’s Political Poll is very biased towards the Right.

In the last election, TV3 underpolled Labour by 5 points and overpolled National by 4 points so last nights TV3 Poll showing Labour at 52.7% and National at 27% means Labour must be doing even better than these incredible results suggest!

It is particularly damaging when TV3 asked voters if they thought Labour was being separatist, and National divisive…

In our latest Newshub-Reid Research Poll, we asked voters: Do you think Labour is being separatist, and do you think National is being divisive?

A majority – 43.6 percent – said no, Labour is not being separatist.

The simple truth is that National’s race baiting isn’t working.

As TDB has been pointing out since National embarked upon this attempt to resurrect the ghost of Don Brash, NZ has simply grown up and matured on race relations.

For most NZers under 50, the Māori culture isn’t a scary bogey monster. We know our history better, we know the injustices of the past. We don’t see radical separatism when we  hear co-governance, no one is imagining  Tame Iti and Hone Harawira in balaclavas shooting AK47s into the air when we envisage the Māori Health Authority – people see a solution.

Now sure, there is a sub clump of mostly older white male boomers who get very angry whenever the word Māori is even mentioned and these men think calling the Prime Minister ‘Cindy’ is the most clever satire ever. Unfortunately National already has all that vote, so National are fishing in an ever decreasing puddle of voters with this Maaaaari get too much crap.

National have squandered what little political capital they had left by actively attempting to rehash racial grievances based on fear rather than genuine criticism. Trying to paint a report as innocuous as He Paupau into a secret agenda to take over NZ Democracy is Qanon lunatic level misinformation and the people of NZ, forged into a unique solidarity by the universal experience of the pandemic, want unity, not division.

Personally, I think this race-baiting hypocrisy by National was a doomed strategy.

In 2023, for the first time ever, Millennials + Gen Xers will be a larger voting block than Boomers. Part of National’s terrible 2020 election result was due to this changing demographics. Being angry at Māori is a bit like denying climate change, it only effects old people and increasingly they don’t have dominance at the ballot box.

The Right don’t have any hope to sell and are left with yesterdays ghosts to try and elicit a response, turns out however that bashing Māori isn’t the vote winner it once was.