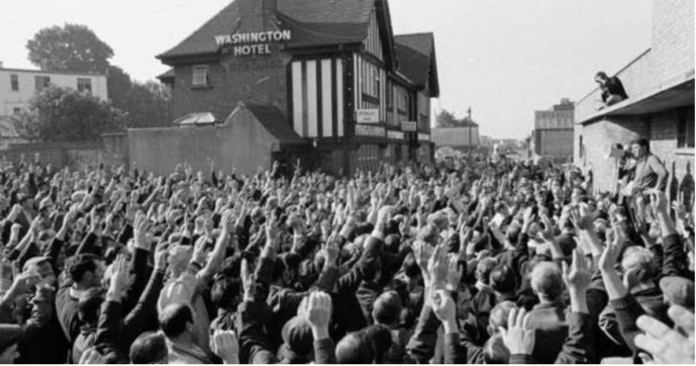 IT’S ONE OF THOSE STORIES that illustrates vividly the robust working-class culture of the trade union movement that was. An “all-up” stop-work meeting has been called to decide whether or not to take strike action. The union secretary makes it pretty clear that without strike action the members’ demands have bugger-all chance of success. The more militant members line up to support the secretary’s recommendation – treating their workmates to that old-time “shed oratory” that is so very rare today. After all their fiery rhetoric is spent, the call goes out for speakers against the motion. Silence. The union president prepares to put the motion. A hand goes up. “Yes?”, responds the president, eyebrows raised. “Um, I was just wondering,” came the hesitant reply from the mild-mannered union member on his feet, “Will this be a secret ballot?” The union secretary, famous for his uncompromising temperament, leaps to his feet and snarls: “If you want a fucking secret ballot, close your fucking eyes!”

It’s easy to laugh at the story, and hard not to secretly admire the brutally effective politics of the union decision-making process. It is also important, however, to acknowledge the anti-democratic tactics at work. The secret ballot effaces the essentially collective character of a strike. Writing “Yes” or “No” privately, on an anonymous piece of paper, allows you to put your interests above those of your fellow workers without fear of discovery. It’s an individual – not a collective act.

To raise your hand, more or less alone, in opposition to a forest of hands raised in favour, requires considerable courage. Going against the will of the majority in public risks incurring its wrath, and in the workplace that can be rough – very rough. That’s why calling for a show of hands is the preferred method of those anxious to secure a quick and favourable outcome  – especially when careful, private, consideration might easily produce the “wrong” answer. It’s the tactic of demagogues, not democrats.

We take the secret ballot so much for granted, at least in the context of electing our parliamentary and local government representatives, that imagining any other way of voting is difficult. Many are astonished to discover that the introduction of the secret ballot dates back only to 1870 in New Zealand, and 1872 in the United Kingdom. In the United States where such matters are left to the individual states, the secret ballot only became universal when finally adopted by South Carolina in 1950! Interestingly, the secret ballot was originally referred to as the “Australian Ballot” on account of Victoria, South Australia and Tasmania being the first jurisdictions in the English-speaking world to legislate for secret voting, in 1856. On this democratic reform, at least, the Aussies beat us to it.

In a world where challenging official orthodoxy is, increasingly, considered career-limiting, the opportunity to register one’s opinion away from the basilisk glare of the ideologically overbearing not only de-stresses the decision-making process, it also allows the true feelings of the majority to be revealed.

The free-speech battle waged last year at Cambridge University in the UK bears out the virtues of voting in secret. Outraged by the University Council’s attempt to limit its staff and students freedom of expression, philosophy scholar, Arif Ahmed, proposed a number of amendments to the proposed regulations – all of which the Council rejected. To overturn their decision a positive vote by the Regent House (composed of all the Cambridge “dons”) was required. To trigger a meeting of the Regent House, Arif and his supporters had first to secure the votes of 25 of its members.

This was easier said than done, as Arif recalls:

“In March 2020, when the University first proposed this policy, I couldn’t find anyone willing to challenge it in public. Not because they all had other things to think about (though of course at that time everyone did) but because they feared the consequences.

“The same thing happened when I and a few colleagues tried to gather signatures to force a vote. You would have thought 25 signatures would not be difficult to extract from more than 4000 dons; but again, I asked probably 50 people who said that they supported me in private but felt afraid to do so in public. They had just applied for promotion, or for a grant, or their head of department might be hostile, or their colleagues might ostracize them…

“You see it in meetings too. Everyone here knows what I mean. Some meddlesome but trendy reform gets proposed by the departmental ideologues; it is tiresome nonsense; everyone knows that it is nonsense; everyone knows that everyone knows that it is nonsense … and yet nobody speaks or votes against it, it goes through, and the darkness thickens. Why don’t you speak or vote against it? – because you are afraid that nobody else will, and you will end up isolated, and you are on a temporary contract… If you had left Cambridge as a student in, say, 2011 and returned to academic life here today, you would be astonished and depressed at the rapidity with which, and the extent to which, fear has now penetrated people’s minds.”

Thanks to the secret ballot conducted by the Regent House, Arif’s story had a happy ending. The Cambridge dons, unobserved (and, hence, unintimidated) by their “departmental ideologues” voted 4:1 in favour of Arif’s amendments – thereby preserving academic freedom at Cambridge and encouraging like-minded scholars in other universities to stand up and defend their rights.

In addition to upholding academic independence, the battle for free speech at Cambridge University revealed something else. It showed just how precariously the “Woke’s” political control is held. Put to a fair democratic test: where screaming crowds of protesters and collegial witch-hunters cannot influence the outcome; the pronouncements of “departmental ideologues” are shown to have derisory levels of support.

One is moved to wonder what the result would have been, right here in New Zealand, if our Parliamentarians had been permitted to vote privately on the recent legislation regulating the creation of Maori Wards. Indeed, it is fascinating to speculate upon which bills would and wouldn’t get passed if, instead of casting their votes in public, Members of Parliament were able to avail themselves of a secret ballot.

One can only assume that the reason they are forbidden from doing so is exactly the same as that of the apocryphal union secretary who made damn sure he got the decision he was looking for – by a show of hands.