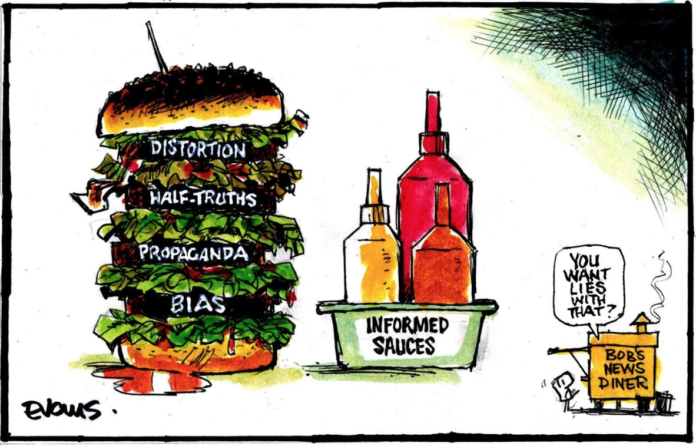 If those in charge of our society – politicians, corporate executives, and owners of press and television – can dominate our ideas, they will be secure in their power. They will not need soldiers patrolling the streets. We will control ourselves. — Howard Zinn, historian and author

To combat cyber-bullying the Government has promised to amend hate speech laws and, in the wake of the terror attacks on the Christchurch mosques, to create new law to deal with hate-motivated offences, such as extremist websites encourage, which can similarly be so destructive.

But, if cyber bullying, character assassination and hateful website content can warrant this attention, why is it that media stories having the same destructive effect, can be published every day and nothing be done about it?

There is no court of law in the land into which an accused can be dragged, and there, without any proof of guilt being established, be, nevertheless, summarily convicted and sentenced to whatever penalty the plaintiff demands.

But in the, so-called, “Court of public opinion” that happens every day!

As an example, the media-made image of poor communities being riven with child abuse, health issues, benefit reliance, alcohol and violence, presented as if their incidence proves such things are the cause of poverty, and not its consequence, is character assassination of a community.

And so with that opinion established, that the poor are responsible for their own plight, they are left to the mercy of the market, the media’s life blood, to survive week to week on slave wages, which, under threat of the employer otherwise closing the business, the government is forced to top up.

I thought Rogernomics was supposed to abolish subsidies!

Ghettoised into sub-standard housing in suburbs pock-marked with fast food outlets, booze barns and loan shark shops, the plight of the poor will be complete when the complicit media hangs a callous sign promising “Arbeit Macht Frie” over the gate.

But, as long as Mammon is served, the media doesn’t give a stuff!

Comprising, the institutions of government, the law and the church, the Establishment’s most vital component is the media, which, while purporting to speak truth to power on behalf of the people, is actually owned by “The Power.”

With full knowledge that if Capital’s cruel control was ever to be challenged it could wreck the very system it perpetuates, the media, having contrived to have people believe that any alternative, to its master holding the reins, would be infinitely worse, sets out to assassinate the character of anyone who refutes Capital’s ‘Final Solution’ plan, the root cause of our “them and us” society.

Shaping public understanding of both local and geopolitical affairs the media’s job is to deliver The Establishment a consensus of support for whatever it requires done, an outcome Noam Chomsky calls “Manufactured Consent.”

But the media’s role in manufacturing consent for malign purposes doesn’t end there.

The US strides into the mock court of public opinion every day, where, in pursuit of its geo-political objectives the media allows it to make, without any proof of veracity, the most outrageous allegations against people and nations of people, who we are then required to summarily convict and sentence..

Lacking even the semblance of proof, which would routinely be required of a general news story, these patently biased allegations which have resulted in millions of deaths, are either printed in ignorance of their paucity, or with complete disregard for the potential consequences, and that of the public’s right to the truth.

So if we are to have laws to stop character assassinations, let’s insist they be robust enough to address the routine publishing of falsehoods written with a malign intent to assassinate, for political purposes, the integrity of any people, society or nation, wherever they be in the world.

And, on the day we remember the Christchurch victims of bigotry and prejudice, let’s hope that when anti-hate legislation is passed, first among those charged, in a real court, is the media which, for political purposes, has been doing it for so long.

More on this topic;