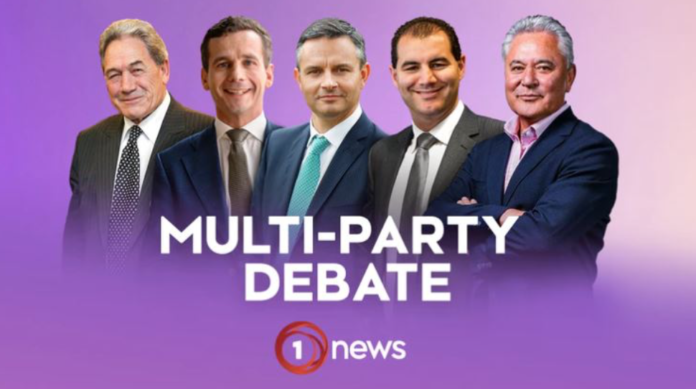 Are you not entertained?

This is a gladiatorial death match with chainsaws and motorbikes.

This is public broadcasting of the apocalypse.

John Tamihere was welcomed with a Haka on the TVNZ foreground. Excellent.

Jessica Mutch: She hosted the best debate to date! She was direct, no nonsense and managed to keep all the stray cats moving in one direction. Excellent job.

John Tamihere: Wrote off National, talked directly to Māori Labour voters and called on them to give their candidate vote to the Māori Party because the Māori Labour MPs are getting in off the list anyway. Was probably the most effective at delivering clear strategy instructions to voters. The Māori Party could be the surprise winners on election night.

Winston: Oh he’s not coming back from 2% and he’s not winning an electorate, but he’s just so cuddly now grumbling and spluttering about things in his day. We are going to miss him when NZFirst get cut from Parliament. The fact he has no King maker power any longer means all his power has evaporated like Jared did at the end of Labyrinth.

James Shaw: Begging not to be electorally executed isn’t much of a rallying call is it? Oh he was ok, but the testosterone in the room looked like he had passed out. He was never going to shine here. Or anywhere for that matter. The Left have to rally around and keep them above 5%. We will do that.

David Seymour: Who slipped 10 Xanax into Dave’s diet coke? Jesus, why was he so sleepy? Was this him trying to be a statesman? Yawn. He’s the the smart arse under grad with intolerable right wing opinions, that’s who he is, a rebel no one likes following a flawed free market philosophy that isn’t relevant any longer. He’s not this dry balls City Council requisition officer who turned up to speak slowly tonight. ZZZZZZZZZZZ. A rare misfire by Seymour who is usually witty, funny and sharp. This was a terrible strategy tonight.

NZ First didn’t gain any new voters from tonights debate, but people respect Winston and have a soft spot for him, but they aren’t voting for him.

Someone needs to slap David awake.

James Shaw was always going to fail in this male ego environment but he’s doing enough to get over 5% because the Left see their policy platform as far more progressive.  Expect the Right to launch a vicious attack on the Greens over the next week.

John Tamihere had another good day at the office following up on his previous public debates. If the Māori Party win 3 electorate seats, we could get an overhang in Parliament.

If the Māori Party win 3 electorates, the Greens come in at 5% and Labour 47% you could get a Labour+Green+Māori Party Government!

How glorious would that be!