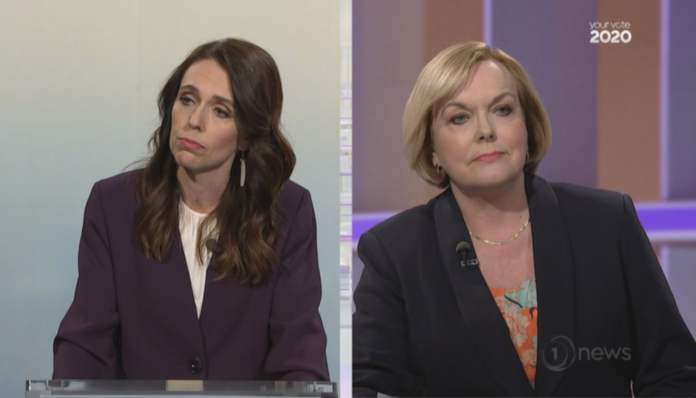 Anyone expecting a clash of philosophy and policy ideas between Jacinda Adern and Judith Collins on television last evening was bound to be disappointed. The government’s COVID management results were undeniable, especially by world standards. The most recent poll numbers reflected that – even after the viral resurgence in Auckland. Large chunks of well-heeled soft National voters had shifted to Labour, a trend illustrated by recent poll numbers in Auckland Central. Many of Nicky Kaye’s supporters from the last election shifted their preferences to Labour’s Helen White and the Prime Minister. Nationwide, the government wants this bloc of voters to stay on board. Raising the top tax rate from 33% to 39 % for those earning more than $180,000 would hardly affect these people. And their conscience will be salved by supporting the government’s proposed minimum wage increase. So, for Labour strategists, it’s steady as it goes – foreground the low COVID numbers, the Prime Minister’s crisis management credentials and the wage subsidy largesse. There must be no controversial policies suggesting the redistribution of wealth and privilege. Got to keep those former National voters sweet (remember 1987?). From this perspective, the television party leader debate had to be boring and inconsequential. Indeed, modest ratings are preferable—Jacinda’s regular Facebook addresses already have cut-through, no need to over-emphasise the television exchanges with Judith.

National desperately want those National voters back. One last policy roll of the dice, let’s go for broke—tax cuts for the middle and upper-middle income earners. Maybe this will shift those stubborn poll numbers. Against this background, Collins had only one option as the first televised debate drew near. Go hard, go early, rattle the Prime Minister, get under her skin, damage her credentials as leader. Create controversy, get people talking after the event—do anything to bring those soft National voters back home.

So, what happened? Well, both sides achieved their objectives to a certain extent. The exchanges were dull, trite, soundbite-driven and truncated by the format. Between regular ad breaks and John Campbell’s interruptions, the contenders were given ridiculously short timespans to enunciate their policy proposals and vision for New Zealand. Nothing to worry about here for Labour strategists then. At the same time, Judith Collins’ energetic counter-punching approach would have pleased her supporters. She never let up, although it would have been turgid viewing for neutral observers. In boxing parlance, Jacinda took some punishment in the “discussions” on poverty, tax and housing (for reasons I will consider shortly). At the end, though, Jacinda Adern’s stature was undamaged. Her concluding references to the Christchurch mosque attacks, the White Island tragedy and the global pandemic subtly reminded viewers of the Prime Minister’s leadership  in trying times.

In certain policy areas, the Prime Minister was inherently vulnerable to Judith Collins’ attacks and unable to counter-argue effectively. The “child poverty” issue is a good example. This phrase is a misformulation, if very young people are struggling, then their older siblings, parents and grandparents are also likely to be in trouble. Poverty is structurally entrenched within families and communities without secure income and capital assets. The government has not addressed this reality through a properly tax-funded public housing policy. Kiwi-build was premised on a bound-to-fail private-public investment model and the recently announced tax changes will bring minimal extra revenue. Unsurprisingly, therefore, child poverty persists despite good intentions, and Judith Collins has an opening. On such matters, the leaders’ responses to Auckland City Missioner Chris Farrelly was telling. He referred to income inadequacy and wealth inequality—but only the former was considered. For Jacinda Adern, income adequacy required increases to the minimum wage. For Judith Collins, abolition of the Resource Management Act was the solution. None mentioned entrenched and worsening inequality between rich and poor. Roughly speaking, three social categories of wealth prevail—the “haves”, the “have nots” and the “have yachts”. The latter group is too politically powerful to allow open criticism from major political leaders. The plight of the “have nots” can be the subject of sympathy, concern and support without altering their social status. The “haves” must be seriously catered for in the battle for party votes. Consequently, in a major televised leader debate, any call from a community leader to redress structural inequality will fall on deaf ears.

So, there we have it. No exploration of fundamental national issues—leader references to climate change were desultory at best. As the campaign continues, Labour will be hoping for more turgid and boring television exchanges among the party leaders, a fine victory for the All Blacks against Australia in a full stadium and a nationwide Level 1 not long before polling day. Judith Collins and the National Party will be hoping for a giant government scandal or cock-up and/or a preventable resurgence of COVID-19. If none of these possibilities transpire, the net result will be a coronation for one side and near oblivion for the other and no real macro-economic plan beyond borrow and hope.