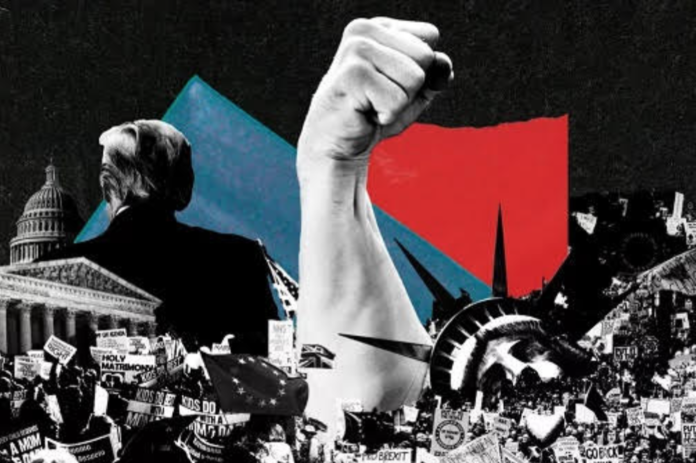 THE GREAT MORAL CHOICE of the 1930s was between communism and fascism. The so-called “Great Powers” which had not yet succumbed to fascism: Britain, France and the USA; did not strike those in search of a better world as its most likely midwives. The first two still presided over vast empires in which wealth and liberty were allocated strictly according to skin pigmentation. At home, Uncle Sam followed a very similar distribution scheme, even if, internationally, he presented himself as the enemy of European imperialism. When push came to shove, however, and most especially if that shove came from below, the liberal democracies proved to be neither liberal nor democratic. The Soviet Union, or at least the version of it presented in the newsreels, seemed to be reaching for something higher. A future dedicated to something more uplifting than the doctrine of white supremacy and the global looting it underwrote.

The great moral choice of the twenty-first century is no longer between fascism and communism. The history of “actually existing socialism” – a devastating human tragedy made all the more unbearable by the sheer scale of its multiple and murderous betrayals – utterly discredited the Soviet blueprint. Tragically, fascism has fared a great deal better than its historical rival. Adolf Hitler may have failed – a betrayal of sorts – but his belief in the superiority and right-to-rule of the Aryan peoples never wavered. His ghost, and the spectre of his ideology, have proved alarmingly easy to raise. Which leaves neoliberalism as the only “actually existing” contender to fascism redux. Neither a happy, nor a particularly comfortable, choice. But, as the neoliberals are so fond of asking: “What’s the alternative?”

It is the ongoing inability of the Left to answer this question that makes the present era so hard to bear. Since actually existing socialism blipped-off history’s screen in 1991, capitalism has had nothing to restrain its worst “animal spirits”. The social ruin produced by so much unconstrained greed has, entirely predictably, provided an ideal breeding-ground for fascist ideas.

The smashing of the West’s trade unions in the 1980s, and the contemporaneous ideological subversion of the social-democratic political parties they had created, left a yawning chasm between the casualties and the beneficiaries of the new, neoliberal, world order. Stripped of effective economic and political defences, the western working-class was left to wither and rot as the factories that had sustained it for nearly two centuries were shut down and their jobs shipped off to China, Indonesia, Mexico and Brazil.

The upshot? Millions of desperate white men, gripped by a toxic nostalgia for the days when being Caucasian and male “still meant something”, found themselves transformed into a tempting political prize. But although the parties of the racist right were successful in persuading members of the decaying working-class to give them their votes; those same voters were singularly unsuccessful in persuading the all-conquering neoliberals to bring back their secure, well-paying jobs. This resentful remnant would become, indeed, the “grapes of wrath”; a bitter vintage just waiting for the trampling feet of opportunistic populist politicians.

Which presented the hyper-capitalist, hyper-globalised economy with a really big problem. For the One Percent who clip its ticket, and the narrow social layer of managers and professionals who make it run, it is absolutely vital that their delicate economic mechanism be kept as far away from stupid people as possible. The extreme sophistication and complexity of the science and technology that make hyper-capitalism work are violently allergic to ignorance. The woeful responses of populist regimes to the global Covid-19 pandemic have made this agonisingly clear – in both human and economic terms.

Hyper-capitalism and its neoliberal defenders cannot, therefore, allow a repeat of the fatal alliance between the fascist brutes who seized control of the German state in 1933, and the highly-sophisticated civil servants, managers and professionals who, in spite of Nazi brutality, kept the German economy and German society functioning until the bitter end. Neoliberalism’s hyper-capitalist china-shop, and the clumsy ignorance of fascist bulls, are a dangerous combination – as Trump’s America proves.

Neoliberalism’s dilemma is how to keep fascism at bay without raising the spectre of communism. Or, more bluntly, how to combat right-wing populism without resurrecting the politics of class conflict? The solution which presented itself most persuasively to neoliberal ideologues was “identity politics”. By shifting the focus of left-wing attention away from the injuries of class: inflicted by capitalism; and directing it instead towards the injuries of race, gender and sexuality: inflicted by whites, men and straights; identity politics made the broad political unity needed for a successful struggle against the capitalist system much more difficult to attain.

Better still, by branding whites, men and straights as the “structural” enemies of justice and equality, identity politics set its followers on a collision course with the very same white working-class males the far-right were seeking to recruit. Neoliberalism, which has always been supportive of racial and sexual equality (both of which enlarge the capitalist marketplace) seized the opportunity presented by this bitter cultural clash to inoculate the next generation of professionals and managers against the fascist distempers unleashed by their unenlightened brethren. Hyper-capitalism is now ready to embrace the “woke” – and heaven help any employee who declines to polish her corporate employer’s public image by challenging, even privately (via Facebook, Instagram or Twitter) the new orthodoxy.

Increasingly, this will be the choice confronting those coming of age in the 2020s. Embrace Neoliberalism’s belief in racial and sexual equality; adopt its secular and scientific world view; and cultivate the technocratic, multicultural, global outlook required of those who keep the machinery of hyper-capitalism humming. Or, throw your support behind the defenders of the national people’s community; agitate for an end to free-trade and globalisation; and use any means necessary (including violence) to uphold the social, sexual and racial hierarchies of your ancestors. That is to say – become a fascist.

Neither of these options has anything to offer the poor. Neither of them will restrain the rich. Neither will do anything like enough, or anything at all, to combat climate change. Neoliberalism believes itself to be rational. Fascism claims to reflect the natural order. But the followers of both ideologies remain content to be carried on the backs of human-beings whose rights and aspirations they do not consider worthy of serious regard. It was to these people that the socialists used to speak.

“Workers of the world, unite!”, cried Karl Marx. “You have nothing to lose but your chains. You have a world to win!”

If only he and his socialist successors had given a little more thought to how they should win the capitalists’ world – and what to do with it when they did.