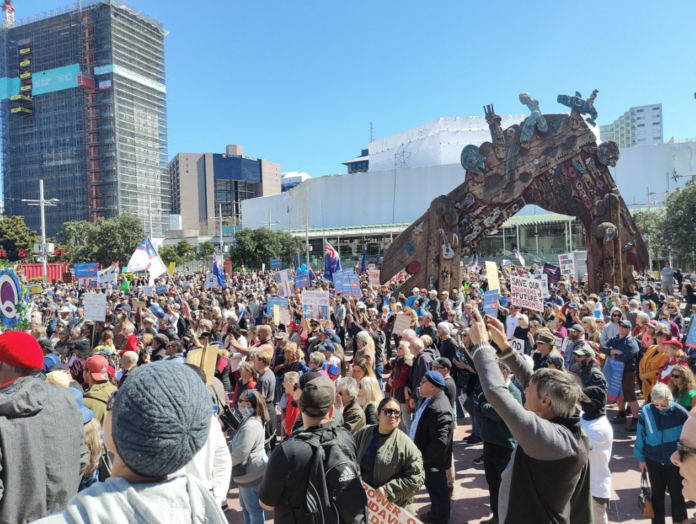 I didn’t go to the Black Lives Matters protest in Auckland because it wasn’t right to protest during a pandemic.

I supported their reasons why they were angry and understood why the never ending murder of unarmed African-Americans saw them take to the streets.

So while I didn’t agree with the BLM protesting during our pandemic, I understood why. Thankfully we saw no infection spike because of the protest.

I can’t offer the same concessions to the QAnon Lunatics who now number in their thousands thanks to Facebook algorithms and the political manipulation of peoples fears by conspiracy theorist Billy TK and venal opportunist Jami-Lee Ross who gathered in Auckland yesterday to ‘protest’.

Coronavirus: More than a thousand turn out for anti-lockdown rally in Auckland

Over a thousand protesters gathered in Auckland CBD on Saturday for an Auckland “freedom rally” alongside Advance NZ party leaders Billy Te Kahika and Jami-Lee Ross.

A sea of people, many of whom were not wearing masks, turned out in Aotea Square around midday and held signs protesting against the Covid-19 lockdown, 5G, vaccines, the New Zealand government and the TPPA.

…The Covid virus is not a bioengineered weapon spread by 5G to bring about a shadowy one world Government.

Jacinda is not conspiring to implement a secret socialist police state (I wish).

There isn’t a plan to forcibly vaccinate everyone with a mind control serum.

These things do not exist and fermenting fear into a fantasy world where 2 + 2 no longer equals 4 isn’t politics, it’s toxic damaged thinking that exploits peoples fears and lack of scientific literacy.

This QAnon lunatic fringe stuff has been able to spread because of Facebook and marginalised people who are alienated by a mainstream media who only exist to sell them stuff they can’t afford.

Of course those abused most by the State are going to believe in an evil far larger than what they see.

Jami Lee-Ross and Billy TK are exploiting this marginalised group in an obscene way.

It is sad to see so many good people tricked.