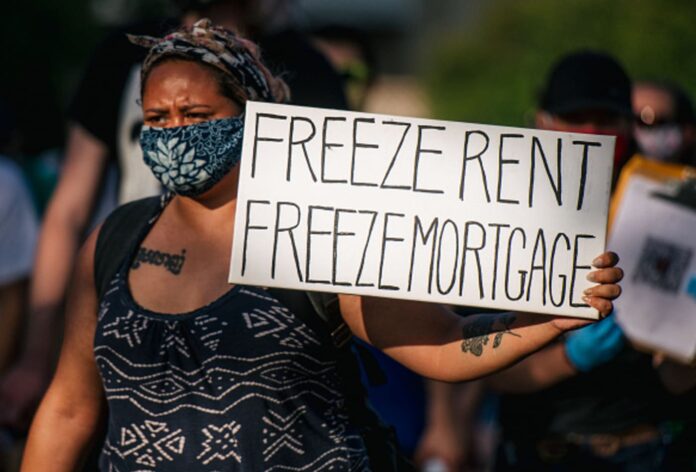 Let’s have a rent and mortgage moratorium and kill this virus off.

The Prime Minister has said she may drop the alert level from alert level 3 to alert level 2, even if the corona virus pathogen is still circulating in the community.

With these words the Prime minister has signaled that the government have abandoned the policy of elimination.

Under pressure from the business community and their right wing political representatives, the virus will be allowed to circulate in the community for the good of the economy.

How many lives are the government prepared to sacrifice for the good of the economy?

Currently there are three New Zealanders with covid-19 in intensive care.

Inevitably there will be deaths.

At what level of preventable death and illness will Chris Hipkins reverse his decision?

The Prime Minister earlier said it is better to go hard and go early.

If the virus is not eliminated under the level 3 alert, and the number of preventable infections, (and deaths), increase, Chris Hipkins will eventually have to reverse his decision.

Without any sign of remission the longer he delays the worse things will get.

If we go to level 4 now, lives will be saved and deaths will be prevented, of that there can be no doubt,

Why not save those lives now?

Despite what the right say, the country will not be better off economically if we allow the virus to keep circulating in the community.

Another lie circulated by the right, is that economic hardship caused by the lockdown have led to a rise in suicides, in fact the number of suicides has dropped.

But let’s take at face value, the Right’s contention that the lockdowns cause more harm than letting the virus rip

There is one simple measure that the government could implement that would alleviate the worst of the economic pain for small proprietors and family households.
A rent and mortgage moratorium for the period of both level 4 and level 3 Lockdown. Even with the government wage subsidy, thousands of small businesses not allowed to trade under level 3 restrictions are already struggling, a rent or mortgage moratorium on their business and homes would make all the difference in alleviating their distress.

An immediate rent and mortgage moratorium must be declared for the whole country for the period of the level 3 and leve 4 lockdown as long as they last.

“I am the handbrake” Winston Peters

The fact that that we haven’t had a rent and mortgage moratorium is down to one man,

After months of wrangling, using his power of veto, Winston Peters has refused to allow the government to legislate for any form of rent relief at all Dismissing the plight of small retailers and food vendors forced to close under level 3 restrictions, Peters was quoted as saying legislated rent relief would be using a sledge hammer to crack a nut. It has been reported that New Zealand First is opposed to rent relief because the big rich building owners, which were largely New Zealanders would lose out to foreign tenants. NZ First has expressed no such concern for poorer New Zealanders who face hunger or eviction if they are renters, or default on their mortgage if they are paying one.

All through the pandemic crisis, the New Zealand First Party in parliament has been an anchor on the government from taking the necessary progressive steps that would’ve helped everyday New Zealanders weather the economic storm caused by the pandemic and the government’s life saving Lockdown.

Without having to pay rent, (or mortgages) on their commercial premises, (and their family home), small business owners will be better placed during the various levels of Lockdown to weather the following economic downturn.
All rent and mortgage payers, including the many newly unemployed, would be hundreds of dollars better off a week. (and it wouldn’t cost the taxpayer a cent, a good thing when the government are spilling red ink all over the place.)

If Winston Peters continues to refuse to allow rent or mortgage relief, the Prime Minister needs to relieve Peters of his portfolios disolve parliament and run the country as a minority government until the election is held on October 17

This brings up my last point; How can the government hold an election on October 17 if Covid-19 is still circulating in the community?

The fact is they can’t, (not that is, without releasing a massive outbreak of Covid-19 to dwarf anything so far).

If we are to have an election on the scheduled new date, the country has to be covid free before October 17

The election cannot be postponed again with out damaging our democratic norms.

If the level 3 lockdown is proving to have no effect in slowing the spread of the virus, to have a covid free election, instead of dropping to level 2 we must move up to level 4.

To postpone the election again will be to feed the conspiracy theorists and create more division in our country, we don’t want to go down that path.

To keep extending the level 3 lockdown will drive many small proprietors and vendors to the wall.

For the good of public health

For the good of our economy

For the good of our democracy

To be able to eliminate the virus before the election, time is running out, we need to go to alert level 4 now