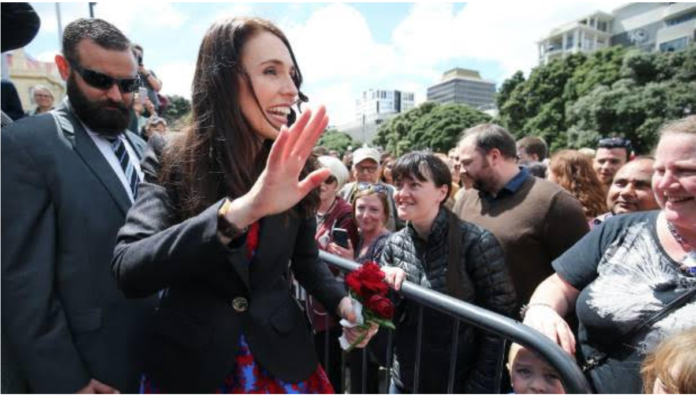 WHY ARE THE RIGHT so very, very frightened of Jacinda Ardern? Are the fears of the Mike Hoskings of this world driven solely by the fact that she is a woman? Or, is it about something deeper than that? Is it actually driven by the fact that, as a woman, she is given the cultural space to deploy ideas which would, were she a man, be denied her?

From the moment she became New Zealand’s prime minister in 2017, Jacinda’s signature theme has been “kindness”. Theoretically, there is absolutely nothing to stop a male politician from adopting the theme of “kindness” as his own. The fact that so few – anywhere around the world – have done so is, however, instructive. To elevate kindness and compassion over all the other traditional political virtues, such as strength, sound judgement and decisiveness, is not something 999 out of 1,000 male politicians would do. Why not? Because in the minds of far too many voters such a move would be interpreted as effeminate and weak.

Recall the fate of David Cunliffe? With rare emotional honesty, he responded to the shocking domestic violence statistics presented to him at a conference of Women’s Refuges by telling the assembled delegates that there were times when he was “sorry I’m a man”. How well I recall the evening of the day he uttered those words. My drinking companions, all of them good, card-carrying “progressives”, had their heads in the hands. Male or female – it made no difference – everyone around the table knew that Cunliffe’s heartfelt admission would sink Labour’s campaign. Socialists, feminists, socialist-feminists: we all knew that no New Zealand male, much less one intent on becoming prime minister, could so openly cast aspersions upon Kiwi masculinity and be forgiven.

So ingrained is this fear of being branded weak and effeminate that even female politicians have made it their business to present themselves as the best man for the job. Golda Meir, Indira Gandhi, Margaret Thatcher, Jenny Shipley and even Labour’s own Helen Clark: all of them worked tirelessly to come across as tough, strong, decisive and, yes, ruthless politicians. Each of them, in their own way, echoed the words of Shakespeare’s Lady Macbeth:

That tend on mortal thoughts, unsex me here,

And fill me, from the crown to the toe, top-full

That no compunctious visitings of nature

Shake my fell purpose, nor keep peace between

The effect and it! Come to my woman’s breasts

And take my milk for gall, you murdering ministers,

Wherever in your sightless substances

And pall thee in the dunnest smoke of hell,

That my keen knife see not the wound it makes,

Nor heaven peep through the blanket of the dark,

Tellingly, it is no great stretch to imagine Judith “Crusher” Collins smiling grimly at Lady Macbeth’s terrifying repudiation of the feminine. Equally tellingly, it is impossible to credibly attribute such sentiments to Jacinda Ardern.

It is Jacinda’s refusal to “thicken her blood” that has caused such fright among the Right. In spite of its apologists’ protestations to the contrary, managing the neoliberal order requires very thick blood indeed. And although neoliberals would recoil from the description, “direst cruelty” is precisely what the free market inflicts upon those lacking the resources to engage with it successfully. In other words, neoliberalism is the antithesis of everything that has traditionally been associated with the feminine aspects of human nature. Kindness and compassion, nurturance and inclusiveness: such qualities have no place in the neoliberal order. When Jacinda proclaimed her determination to practice the “politics of kindness”, she was, wittingly or unwittingly, raising a revolutionary banner.

Jacinda’s response to the Covid-19 Pandemic has proved particularly difficult for the neoliberal order to swallow. Her refusal to place the needs of the few ahead of the needs of the many continues to enrage its defenders. For the first time in 35 years, the New Zealand State has told its business people: it’s employers, bankers and landlord’s; that their interests must take second place to those of ordinary working-class New Zealanders. Billions have been – and continue to be – spent to keep the nation’s households functioning. Rights have been constrained, not, this time, in the name of “labour market flexibility”, but in order to keep the whole population safe. For the first time in a long time, the New Zealand government has instructed its people to be something other than “competitive”. For the first time in a long time, it has asked them to treat each other with “kindness”.

The Mike Hoskings of this world are telling New Zealanders not to believe the numbers thrown up by Newshub’s Reid Research poll. They simply cannot accept that the social solidarity which was asked for, and given, during the period of Lockdown has paid such handsome political dividends. Clearly, they are no historians.

Eighty-two years ago, an equally flinty-faced National Party described Labour’s Social Security legislation as “applied lunacy”. The Prime Minister, Mickey Savage, responded that all his government was offering the people of New Zealand was “applied Christianity”. Mickey could say this, of course, with complete confidence. New Zealanders in the 1930s were an actively Christian people. The injunction to “love they neighbour as thyself” constituted the beating heart of the Christian religion. “Humbug!” cried the capitalists. “Amen!” shouted just about everybody else.

The secret of Christianity’s power has always been its capacity to integrate its unashamedly feminine values with the all-too-masculine impulses of the classical and feudal regimes it tamed and civilised. For two millennia, frustrated patriarchs have railed against the womanly weakness of this “slave religion”. Everyone from Gibbon to Nietzsche has lamented its tendency to soften and re-direct the all-important will to power that makes societies such wonderful places for men to live in.

New Zealand is no longer the Christian country it was in Mickey Savage’s time, but “kindness” makes a pretty good substitute for “applied Christianity” nonetheless. I strongly suspect that Jacinda knows to the decimal point the mighty harvest of votes her predecessor reaped in the general election of 1938. The 55.8 percent given to Labour for its “applied Christianity” isn’t far off the 60 percent currently being offered for Jacinda’s “kindness”. Right now, though, I’m pretty sure our young prime minister, who is modelling a whole new way for women to do politics in the Twenty-First century, would happily accept either figure!