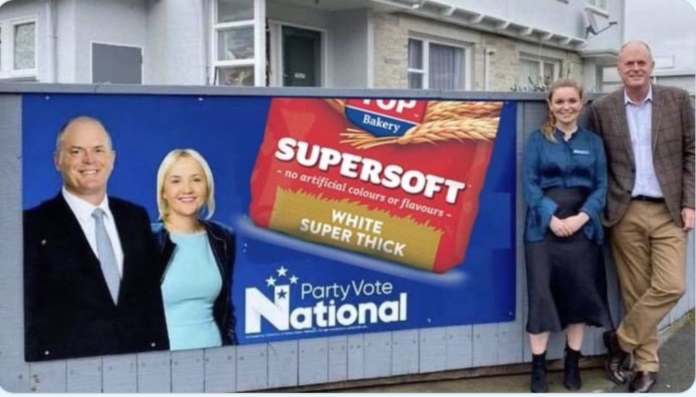 The latest Boag revelations are so extraordinary and speak to such a depth of dirty politics it’s difficult to see how Muller’s leadership survives this.

National must be headed towards a historic defeat, the self implosion here is just jaw dropping.

So it turns out that Boag lied, and that she had actually sent information to Woodhouse as well…

National Party health spokesman Michael Woodhouse confessed this morning to receiving four unsolicited emails from Boag between June 21 and 25 which contained patient details, but it was not the same information that was sent to disgraced MP Hamish Walker.

His confession follows National Party leader Todd Muller’s comments yesterday that he had not asked his MPs whether they had received confidential information as Walker had.

“The issue is sorted from my perspective,” he told reporters yesterday.

But a party spokeswoman told the Herald that Muller knew about Boag’s emails to Woodhouse on Tuesday.

…so let us get this all straight.

Boag took privileged information, was leaking it to Walker and Woodhouse while they and Muller criticised Labour using the leaks.

Hamish and Boag get busted, Boag lies about giving the information to anyone else, Muller says the issue is over and then we find out Woodhouse was also sent information and Muller knew he had while telling Media he hadn’t.

Jesus wept – their deceit and the attempts to cover up the lies rather than admit everything up front is simply extraordinary.

Labour: Today Bryce Edwards was suggesting that the Greens would be the only way Labour win, after this extraordinary cascade of implosions, Labour must be on their way to an outright majority. The public backlash at the deceit by Muller’s leadership team will be enormous now.

Chinese Spy Jian Yang: On the same day National implode, Chinese Spy trainer Jian Yang resigns (after we launched our petition to have him kicked off the Party list) is retiring from politics following the election and so will be able to slip under the radar and won’t gain any real attention.

Simon Bridges: How smug must Simon be feeling right now?

ACT: Right wing voters will walk out on National over to ACT. They could hit 5% this election.

Matthew Hooton: He walked away from a credible career as a political commentator in the media and abused his platforms to aid Muller into place and this is what he gets in return for it? He makes masochists flinch.

Political commentator Ben Thomas: It’s not just Matthew Hooton who gets damaged here, his purse Ben Thomas who works at Exceltium, Hooton’s PR company (that’s about to have no clients) will hurt Ben as well. Those Spinoff Political Podcasts and appearances on The Nation can’t pay all Ben’s bills.

Michael Woodhouse: He must reign now, he withheld telling the public about receiving the information.

Todd Muller: It’s over, he knew Woodhouse was also sent infmoration and withheld that when asked by the media.

Nikki Kaye: With the historic defeat National are about to be handed as Kiwis turn their back in disgust, the only National MPs left will be the conservative white south island electorates and they will not support Kaye for a 2023 leadership bid, so her career will be damaged by this as well.

National: They face a historic defeat after all this.

Dirty politics: The biggest loser here is dirty politics. When Hager first exposed National as a pit of political sin, the populace of NZ didn’t want to believe it, but watching Dirty Politics raise its head again, the public who are feeling pandemic solidarity for their lockdown sacrifice are now no longer prepared to tolerate this kind of politics today.

This just gets worse and worse, and the inquiry has barely started and will return its findings before the election.

The only way Muller wins now is if the Labour Government got caught bio-engineering the Covid-19 virus themselves.