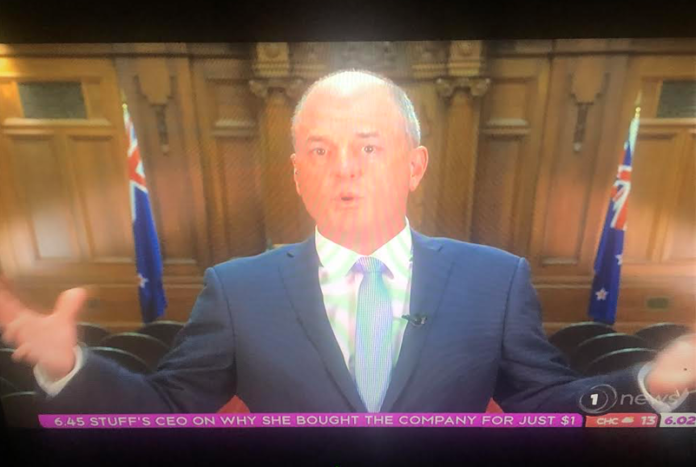 Jack Tame is one of the best political interviewers on screen in NZ.

He is always well researched, incredibly quick on his feet and will give a devastating question with a professional smile.

He’s also painfully polite, so if you screw up here, you have no one to blame but yourself.

I’m not going to say Todd Muller’s first major live TV interview was a train-wreck, but it sure as hell was a car crash.

For his first interview, Todd Muller should have been in the studio with Jack, he was in Wellington and it made the interview disjointed and Muller looked panicked.

Halfway through I felt like I should be ringing for Lifeguards because it looked like Muller was drowning.

Jack gave him a very fair go but Todd sounded like a very nervous head master with no clear plan what to do next.

Like Oliver Driver and Guy Williams, Muller has all the false confidence of a tall person and waves his hands around a lot, the way CEOs do when they get basic bitch media training.

Even the right wing panelist, Ben Thomas, admitted that was Muller’s worst interview to date. It was funny that Ben was on the show because of course Ben works for Matthew Hooton and Matthew Hooton is currently under suspicion for using his media platforms to plot against Bridges, so having Ben commenting on Muller was like having Ivanka replace  Donald Trump Jr to provide neutral commentary on a Trump rally.

After watching Muller’s under prepared and over cooked interview, I think Jacinda will destroy him come the debates for the election.

Hooton will be banging his head against the wall after this poor showing by Toddy, not too late to get your RNZ job back Hoots!

After that performance by Muller, Simon’s 29% must be starting to look really good to National about now.

Whatever you want to say about Simon Bridges, and I have said lots of very negative things and I would never vote for him in a million years, you knew where and what he stood for.

I have no idea what a Todd Muller National Party would do other than look daft in a MAGA hat.