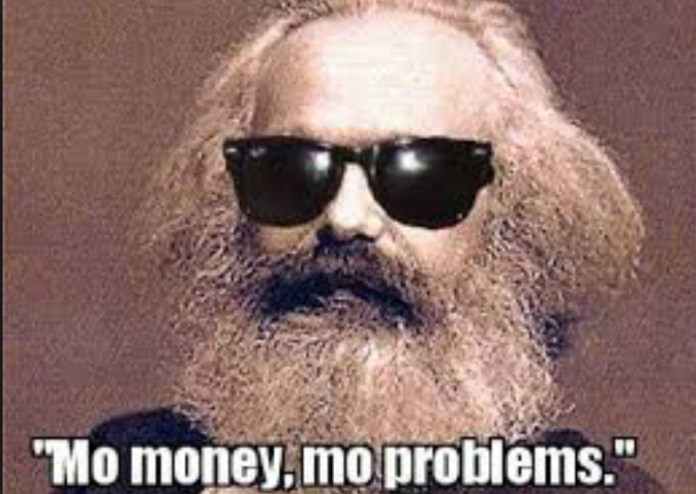 As stated in TDB repeatedly, the pandemic is not an isolated event, but a symptom of capitalism in its terminal crisis.  The virus was released as a result of centuries of plundering and disrupting nature. Therefore, the spin coming from the ruling class that the pandemic has crashed an otherwise ‘healthy’ or ‘prosperous’ economy is fake news.

This is exactly the argument put up by the new leader of the National Opposition Todd Muller. Once the pandemic is out of the way, National will make sure that the huge debt run up in keeping it on life support, will be managed by experts to get back to business as usual, paid for by the working class, as usual!

I have also argued on this blog that the pandemic is an effect of terminal crisis, triggers that crisis into a crash, enforcing lockdowns to prevent the pandemic from doing even more damage. In the process we have a real time crash causing an instant depression which exposes how the capitalism system works.

So, if by now you don’t see that capitalism is a system that exploits labour for profit to the point of driving us all to destruction and extinction, and which needs to be replaced by socialism for humanity and nature to survive, let me spell it out for you.

The need for a lockdown was to close down business because there was no way capital was capable of dealing with the pandemic under normal working conditions which allow rapid transmission of the virus. Had public health systems been in place to manage transmission by testing and quarantining victims on the job then a mass lockdown would not have been necessary.

So why did no adequate public health provision exist? The answer as Marxists have pointed out for decades is that capitalism in structural crisis cuts its taxes as a drain on already falling profits, which means cuts in social spending including a health system able to deal with any predicted pandemic. That known risk was discounted to counter falling profits!

So, it is clear that both National and Labour led governments in the neoliberal period were responsible for the massive run down of the health system as part of an attack on the welfare state to reduce taxes on already falling profits.

Hence while the mass lockdown imposed by the Labour Coalition is talked up by Todd Muller as necessary, he is not going to acknowledge that the cuts to the health system to save profits is the main cause of the pandemic. Rather he argues for the ‘recovery’ of a ‘prosperous’ economy by targeting the fiscal stimulus to business that can lead us out of the global depression. So much for the ‘hidden hand’ of the neo-liberal state.

We can predict that National’s ‘plan’ will continue the bailout of business but target only those businesses which are able to survive, revive and return to profitability. This will be mainly SMEs that employ most workers in this country and are the source of regional prosperity. The wage subsidy will go as a return to profitability requires market-led pay cuts, longer hours and insecure contracts.

Larger businesses with balance sheets boosted by bailouts and theft of wage subsidies will be left to compete to see who will come out as winners, as in any depression. Most of these big corporates are already enmeshed in the state apparatus because they are ‘too big to fail’. No question that state will pick winners in the process of the recovery. The state-induced depression in Aotearoa will, under either National and Labour, become a state-managed shakedown and restructuring of big business and MSEs.

Doesn’t all of this point to one thing? That for capitalism to survive, the state acts to manage the relation between labour and capital when the market fails. But that each time the market fails the situation is worse as capital is exhausting its host – nature. Labour pays the total price for the survival of a diminishing number of increasingly large monopolies.

In the process labour shares the same fate as nature as a whole, its labour power is sucked out in greater productivity (greater exploitation) to compensate for declining profits. The working class is divided between those in work surviving on slave wages, and those who are cast into the labour reserve army to die, pandemic or not.

Yet the pandemic stripped all the ideological bullshit from this process. The need to drive workers back to work proves that without labour power capitalism is dead. Jobs are needed by capital to produce value and hence profits. That’s what the hurry to ‘create jobs’ is all about. Those consigned to the scrap heap prove that it is only exploitable workers that capitalism wants, the rest can die.

A few fundamentals recapped. Capitalism is driven by the exploitation of labour power which is the capacity of labour to create value in the form of commodities (law of value). The definition of value is the socially necessary labour time to create it.

In order for this to work capital has to separate workers from the means of subsistence so that wages are needed to live. The reserve army of labour mired in misery competes for jobs and drives down the value of the wage. The pandemic has produced a graphic picture of this in the misery of the lockdown, especially in the poorer countries like India and South Africa.

Unlike the mythical free market ideology, capital cannot live in equilibrium. To extract more value, it replaces living labour with ‘dead labour’. This is the ‘organic composition’ of labour. This is the previous labour required to create machines which do not produce more value (in fact they use up or depreciate dead labour).

The competition to extract value from labour exhausts its value producing capacity as it sucks nature dry for profits. Marx explained how this led to a long-term tendency for the rate of profit to fall (LTRPF) and ultimately the stagnation and collapse of capitalism in a series of worsening crashes.

Back to the future. We are now living through this predicted decline and fall of the capitalist system. Attempts at ‘recovery’ must make the working class pay the price. Yet the pandemic shows us already that workers are not prepared to pay that price.

First, everywhere we see that where the forced lockdowns leave workers without money to survive food riots are occurring. Workers are not prepared to rot on the scrapheap of the reserve army. They are demanding the right to live, and get PPE and money to survive.

This is workers asserting their control over their own lives and means of subsistence where jobs are denied them. They are challenging their separation from their livelihoods. Where they are met with repression by state forces, they step up their resistance. As Marx said revolution will come when the masses have nothing to lose but their chains.

Second, where the capitalist ruling class imposes a ‘recovery’ in the form of Trump’s “opening up” and forces workers back to work in unsafe conditions workers are refusing to go back or striking on the jobs. Over 200 strikes have occurred in the US in the last two months most recently by auto workers refusing to work on the production lines without health and safety protection.

Here too, workers are demanding health and safety conditions necessary for work in the post-modern pandemic of the decline and fall of capital, refusing to pay for the bosses’ crisis with their own lives.

The message is clear. Capital lives off the labour power of workers. They refuse to accept the conditions imposed by capital in its terminal crisis to pay with their lives. When the tiny ruling class defending its pile or wealth threatens nature and humanity with destruction, then the fundamental contradiction facing humanity is starkly posed. Life or Death.

Either we succumb to the death drive of capital towards extinction, or we rise up and oppose it with a massive global movement to take back control over our lives, our means of subsistence, and control of the economy and political decisions necessary for our survival.