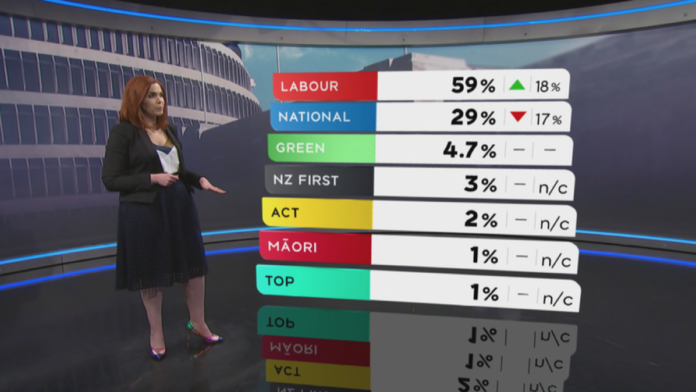 The TVNZ Poll follows the Newshub Poll in showing an enormous swing to Labour. This is as unprecedented as the pandemic itself, never before in MMP history has one Party had a realistic shot at becoming the majority Government and it has ramifications throughout the entire political landscape of NZ.

Jacinda Ardern – She is a god damned phenomena. Her emotional intelligence, communication and her sense of where Middle Nu Zilind cautiously sit ideologically has given her instincts that have become almost super powered. Disgustingly Cautious when it comes to meaningful welfare and inequality reform and a super star when we enter a crisis, she has steered us through terrorism, volcanism and the almost bubonic plague.  She is building a 4 term legacy here and will be off to the UN afterwards to lead that. She has recast leadership from the masculine to the feminine without compromising on strength. Who would ever have thought we would see the day when Kindness was actually a quality in modern leadership?

Maori Party – If they pick up an electorate seat, their 1.2% here could easily expand to a second MP off the list.

Labour – Being a majority Government can be as much a curse as a blessing. Currently Jacinda and Grant can pretend their own cautious political instincts aren’t the ones stopping any real progress on inequality, housing or welfare reform. They can blame Winston, but as a majority Government there is no where Labour can hide on those issues. If Labour wins  majority Government they will actually have to do something on a whole range of issues, the problem is the talent pool inside Labour is a puddle and with total power comes Ministers whose deficits will become glaringly obvious. Labour could quickly become a victim of their own success if they don’t have real structural change in mind come the day after the election.

National – Oh how the mighty have fallen. The simple truth is that National don’t themselves know what the hell they stand for other than preventing the Left from taking political power. When free market selfishness is all you have to offer an electorate shell shocked by crisis, you quickly fail to be politically relevant. The first rule of the State is to protect the people, National want to gut red tape, recreate the housing crisis and smash up worker rights while attacking beneficiaries and gang members. Kiwi’s just shared a universal experience, they want to know how National will help them, not who National will beat up on their behalf.

Simon Bridges – Poor bugger, National’s problems aren’t Leadership, National could have been led by Ronald Reagan, Margaret Thatcher and Blonde Blue Eyed Jesus and they would still be polling 30%! If Todd Muller is the answer, your’ve asked the wrong fucking question.

Greens – As TDB has been pointing out for 3 years, the woke middle class identity activist clique that the Greens have mutated into is a politically alienating as a cup of cold sick. The Spinoff Woke Twitter starting position is all white people are racist, all men are rapists and anyone supporting free speech is an actual card carrying Nazi who probably abuses children WHILE WEARING a Gestapo uniform. Their ridiculous Carbon Neutral by 2050 is a joke and they are more focused on reclaiming the word ‘Cunt’ and being good Trans Allies than the climate crisis. The Greens over poll each election and have gone backwards over the last 9 years so todays 4.7% can easily be 4% on election day.  I think the Greens are in survival mode this election, unfortunately they don’t seem to appreciate that and if they do fail to win representation in Parliament, it won’t be their Spinoff level misplaced smugness that will have alienated the voters, oh no, watch them blame the heteronormative white cismale patriarchy for failure at political relevance.

NZF – Who? While they have a story to tell about fractured neoliberalism and free market capitalism that allowed a pandemic like this to erupt, they have no real ideas and no real policy. Winston will keep poking China to try and get an electoral reaction but with a Labour majority really possible here, NZF have become politically irrelevant.

CONCLUSION – what every journalist & punter is missing

I think what these incredible polling results tell us is that there has been a seismic shift in the psychology of the electorate.

Punters and journalists are missing the impact of what this shared universal experience has created, NZers genuinely feel they have sacrificed something through this pandemic. Every weekday for 8 weeks they’ve turned to Jacinda at 1pm and they have felt safer and they have felt proud of her leadership.

They watch the madness of Trump or what’s happening in the UK and they are grateful to Jacinda and with real gratitude comes loyalty in NZ.

For National to have fallen as far as they have, Jacinda has appealed to National voting women, Chinese-New Zealanders and the urban professional classes, groups previously unreachable by Labour.

Todd Muller isn’t going to change that, can you imagine him in the Election Debates up against Jacinda? It will be a homicide, not a political event!

Right now we are looking at a majority Labour Government with a mutilated National, a resurgent ACT and Māori Party minus the Greens and NZ First.

But 4 months is a long time in politics.