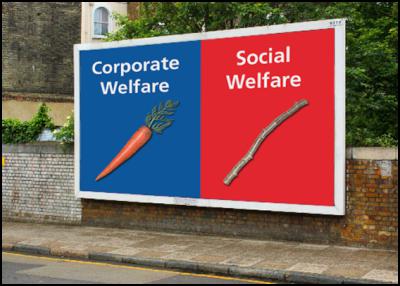 Prising corporate hands from the throat of our democracy is more important than ever. The public mood does not favour going back to “business as usual” after the pandemic where we all work hard to increase the wealth of the one percent. But any break from “business as usual” will be extremely difficult because our main political parties are heavily reliant on corporate donations to fund their election campaigns.

Once upon a time National and Labour had tens of thousands of members and were more strongly democratic than they are today.

Policy debates began in branches and made their way through regional conferences to annual party conferences where issues would be thrashed out on the conference floor for the whole country to see. Some of those issues would make their way into party manifestos and public debates at election time.

Local party branches were the driving force for election fundraising, running cake stalls and raffles to brings in the small notes and coins which would build slowly into a campaign fund. A friend of mine was such a staunch Labour supporter she ran a cake stall at her back gate on a busy Auckland road every Saturday morning in election year, selling cakes and muffins baked by local branch supporters. It was a political party version of “Ladies a plate please”.

Today National and Labour are a slim shadow of their former selves. Membership figures are a fraction of what they were in the middle decades of last century, reflecting a drop in voter confidence in political parties generally and subsequently lower voter turnouts in national elections.

Policy debates are now pedestrian and off limits to the media (policy is mostly left to MPs) while the main role of party conferences is to provide an enthusiastic audience for the party leader to address – highly orchestrated events designed for prime-time television.
Needless to say, cake stalls and raffles no longer raise enough money for election campaigns so Labour, National and New Zealand First are now heavily reliant on corporate donations. In return, big business expects corporate-friendly policies. For example no increase in corporate taxes or any regulations which could stem the tide of corporate profits, irrespective of the impact on the rest of us.

Public concern about corporate pipers calling the policy tune for political parties has led to some rules about the transparency in party donations.

However the one constant in national and local body politics is the length to which politicians go to hide the identities of their big donors.

Along with New Zealand First, both National and Labour are embarrassed to reveal the extent to which they are reliant on big business and the corporates themselves are equally keen to keep their influence over our politicians away from the public gaze.

Four National Party figures are currently embroiled in a court case where it is alleged two donations of $100,000 were deliberately split into amounts that would come under the $15,000 limit above which the donors would have to be identified. New Zealand First is being investigated by the Serious Fraud Office in a similar situation where large donations were allegedly channelled into a “New Zealand First Foundation” and then used to pay New Zealand First election expenses. Local body politics is similarly tainted with the re-elected mayors of our two largest cities under Serious Fraud Office investigations over allegedly failing to identify their big donors.

It’s clear to most of us that tighter and more robust laws are needed to safeguard our democracy from this ever-encroaching influence of the corporate sector over our political parties.

So what changes would make a difference?

Parliament voted for one significant change late last year to ban foreign donations of more than $50 but this applies only to national elections. It must apply to local body elections as well.

All donations to parties or candidates should be in the name of individuals who are eligible voters rather than companies, where the connections are often unclear, and we should know their names before we vote. Currently candidates are only required to reveal their election donors many weeks after the election.

This issue became particularly important in the Wellington local body election campaign last year when a single large donor had a dramatic impact on the mayoral campaign. The public found out about this big donor before the election but there was no legal requirement for the candidate to revel this beforehand. There should be.

We should insist that all publicly notifiable donations are out in the open at least a week BEFORE an election with it being an offence to receive donations after this time rather than months afterwards.

And why should the publicly notifiable limit for political parties be set at $15,000? Why not reduce the threshold for public notification to $100. We could even look at setting a maximum amount any individual could contribute to an election campaign.

There’s also an argument to make for state funding of political party election campaigns. We already fund around 80% of the activities of our main political parties with just the last 20% raised through donations. Paying this last 20% from the public purse would be a cheap price to help protect democracy.

If we don’t want to return to “business as usual” it’s time to wrench our democracy back from the tenacious grasp of corporate power and its political lackies.