Woke up still in darkness. Alarm hadn’t gone off. Turn to radio clock; it’s a few minutes after 6am… I lie there in the dark, waiting to drift off to sleep… but it ain’t happening. Clock ticks over to 6.55 and RNZ snaps on to the voices of Gyles Beckford, Corin Dann, and Susie Ferguson… Latest updates on covid19; thankfully no one else has died overnight. I waken more and more as the stories unfold…

… Medical staff from Canterbury are heading to the West Coast to help after 21 health workers from Greymouth’s hospital had to go into isolation. They had been treating the 70-year-old woman who yesterday became the country’s first Covid-19 fatality.

… New Zealand has 514 cases of Covid-19, with one death and 56 recovered. University of Auckland Professor Shaun Hendy speaks to Corin Dann.

… The Easter Trading Laws could be amended to let supermarkets stay open on Good Friday and Easter Sunday, days where they are normally forced to stay closed. Prime Minister Jacinda Ardern told Susie Ferguson it depends on whether supermarkets need the time shut to restock shelves, but the government will be talking to them directly about the issue.

… The Director-General of Health is expecting more cases of community transmission to come to light this week. That’s despite a dip in the number of new cases reported yesterday.

… A Wairarapa farmer says heavy rain that fell over the weekend will be a “gamechanger” for the drought-stricken region.

It’s going to be a new day in several ways. Staff/client rosters have been radically changed to reduce the number of clients in our “bubbles”. Mine is still bigger than I would like, but we do the best we can with the tools we have. At least three people are removed from my “bubble”, which makes things marginally safe for them and me.

Quick breakfast with first two coffees of the day; feed the cat; prep home-made lunch (cafes are a luxury from how long ago?); check emails; pack up the gear I need for the day and out the door I go. I’m an hour earlier than I normally am but it’ll give me extra time to take notice of things on my way into Wellington and travelling through the city. This isn’t just a routine drive to work, but also scrutinise how things are progressing in our lock-down world.

Before turning from my suburban road onto SH2 I notice a police car parked on the side of the road. First one for the day?

On the motorway, traffic is again almost non-existent. Perhaps “heavier” by one or two cars. But then, this is supposedly “peak hour” and instead of three of four vehicles in my field of vision, there are six or eight. I don’t think traffic was this sparse since 1920.

Interesting… I’m noticing commercial vehicles on the road which I doubt are “essential”. A heavy truck, painted fiery red, with “Coca Cola” emblazoned over it. Soft drinks? When did that become a staple, essential food?

A few minutes later, a Firewood truck. The vehicle is a light truck and covered. I have no idea if they are delivering firewood or not. If so, and if the driver is coming into contact with clients… [Note, in a weird coincidence, at 10.47pm as I write this, a friend txts me to describe her day in lock-down and mentions having firewood delivered next week. So it seems they are operating in the lock-down.]

Then a C & M Transport heavy-duty truck built for gravel, rock, soil, and similar materials drives down from Horokiwi Rd, onto the motorway. Is that an essential service when the building industry is practically at a stand-still?

At least two trucks lugging shipping containers. I hope those containers are filled with foodstuffs for supermarkets…

Then, a couple of “Rockgas” trucks…

A chemdry van. When did carpet cleaning become “essential”, FFS?!

Is there ANY business that ISN’T open and operating as per normal?!

Wellington is as deserted today as it was last week. Hard to tell if there are more or less cars. At the Basin Reserve roundabout a bicyclist riding her bike on the footpath passes within a metre of a pedestrian. Even in saner times, it looked an unsafe passing manouver.

But driving up the Mt Victoria tunnel showed The Quiet Earth the city had become. At nearly 9am, the tunnel was… empty. I pulled over (yes, illegally… but since I was The Last Man On Earth…) to snap this image;

Eerie… like something out of an episode of The Twilight Zone, an empty tunnel that seemed to disappear into infinity. It was waiting for me to enter…

Once through the tunnel, a quick drive into the eastern suburbs. More joggers. At 9am, the car park at Miramar New World was full. Queues of well-spaced shoppers waited patiently, in their own two-metre bubbles, respected by others.

At Kilbirnie Pak N Save the carpark seems about half (?) full. I park my vehicle in the underground carpark, which is almost empty. Upstairs, shoppers again queue outside the main doors, with yellow strips conveniently marking two-metre spaces. Everyone is waiting patiently.

At the line I woman remarks how well New Zealanders are doing, considering how we have a “thing” for strong independence and not liking being told what to do. I reply I made a similar point yesterday in something I wrote for a blog. Another of those curious acts of synchronicity that marks our lives.

Inside, there is signage everywhere, imploring people to act responsibly;

As I make my way through the aisles it takes only a few minutes to realise something: it’s harder to keep two metre spaces from other people than I thought. Most people – two thirds? three quarters? – reciprocate the need to maintain safe distances.

Some don’t. They either don’t understand what two metres is; have forgotten to respect the new boundary; or, simply don’t care.

It’s irritating. In effect, one person standing at, say, the cereal section, commands two metres in radius around her/him. You have to wait till they move on.

Like I said, most respected the new norm. A few didn’t. One guy in particular not only ignored the two metre “bubble” but passed close enough to me to raise strong discomfort in me. And the prick knew. His eyes met mine. He saw the expression on my face.

This carried on  for another two aisles. F**k it, I thought, if he does it again, I’m going to cough in his direction and in a “Dad’s Army” kind-of-voice croak at him,

“Oh, sorry, mate. It’s this coronavirus thing I picked up in China… Can’t seem to shake it…”

But he scurried off to check-out. Inconsiderate prick. I hope his position in Hell is in a very warm spot…

Has the “Futures Market” for bog paper collapsed?

Not so the baking section. Human locusts had been through the section and left not even a chocolate chip or speck of wholemeal flour,

At the checkout, more yellow tape marked off two metre intervals. It seemed to be respected by everyone that I saw standing in line; 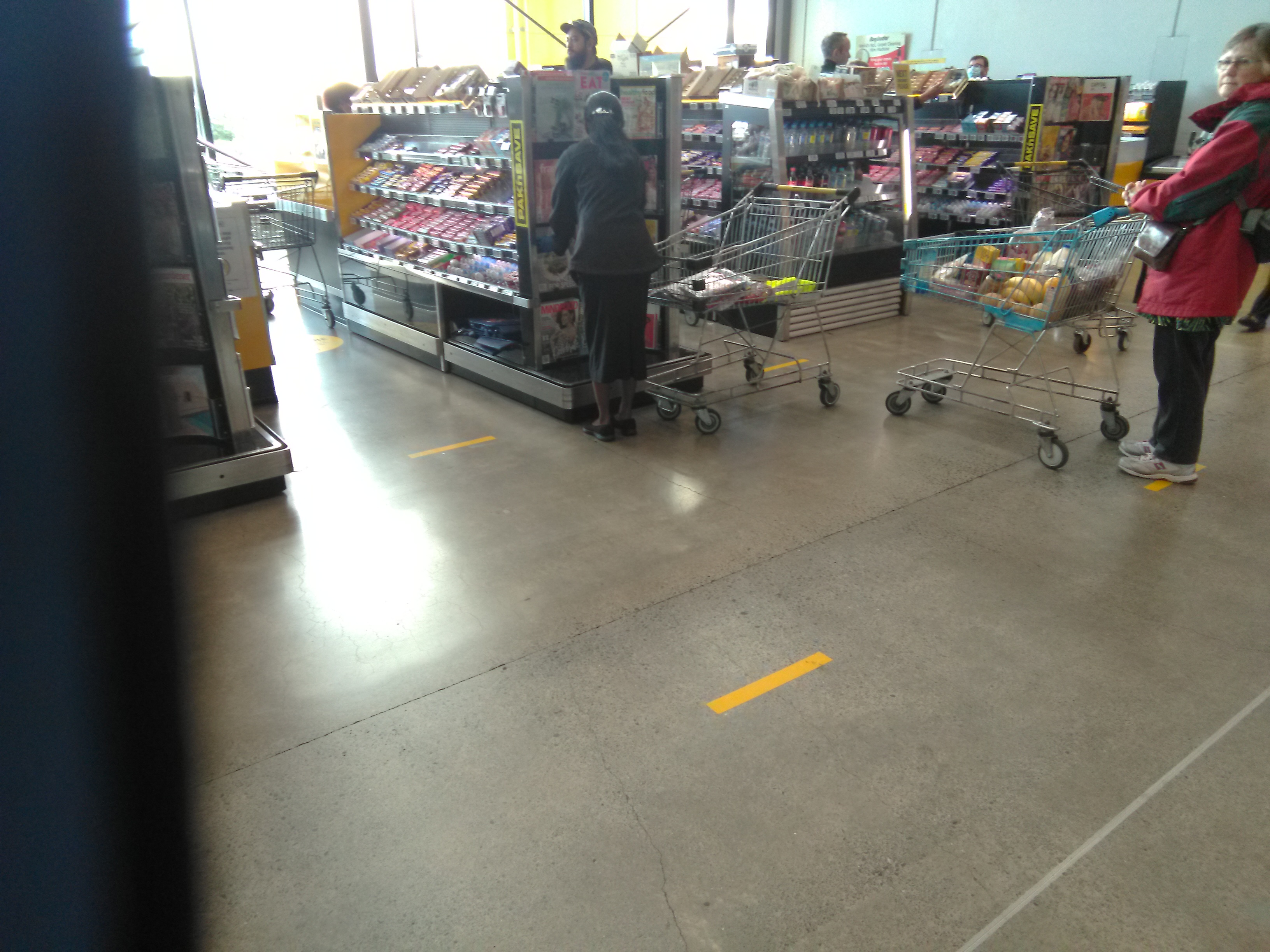 Equally important, to safeguard the workers, plexiglass shields had been erected in front of them; 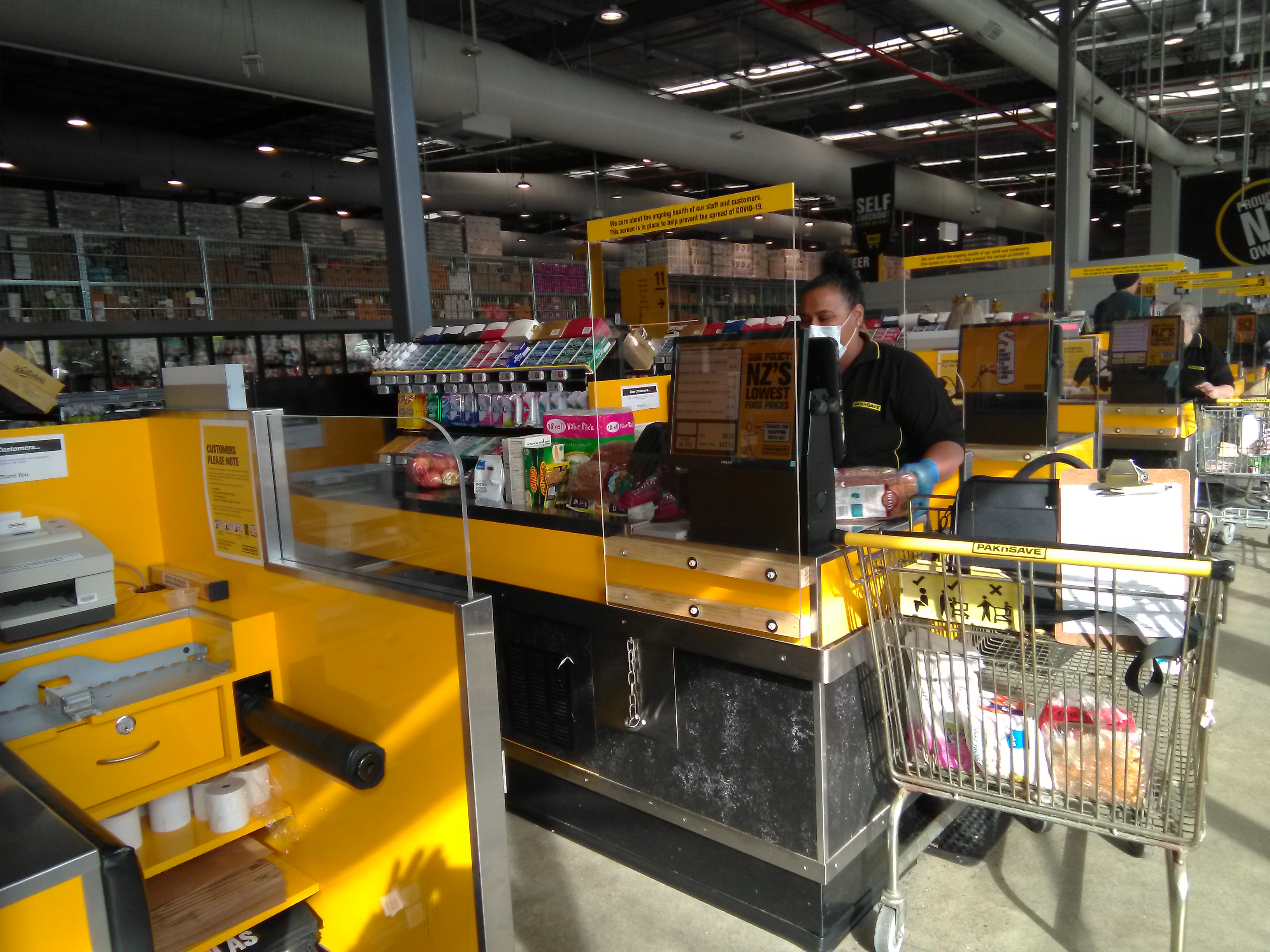 One checkout operator was heard saying to a customer she wished the shields could stay up permanently.

And just when I thought things couldn’t possibly get any weirder, well they just did.

Two men (?) in full head-to-feet hazmat suits, breathing-masks, and protective goggles appeared at the supermarket entrance. One didn’t want to be photographed – the other did not mind. 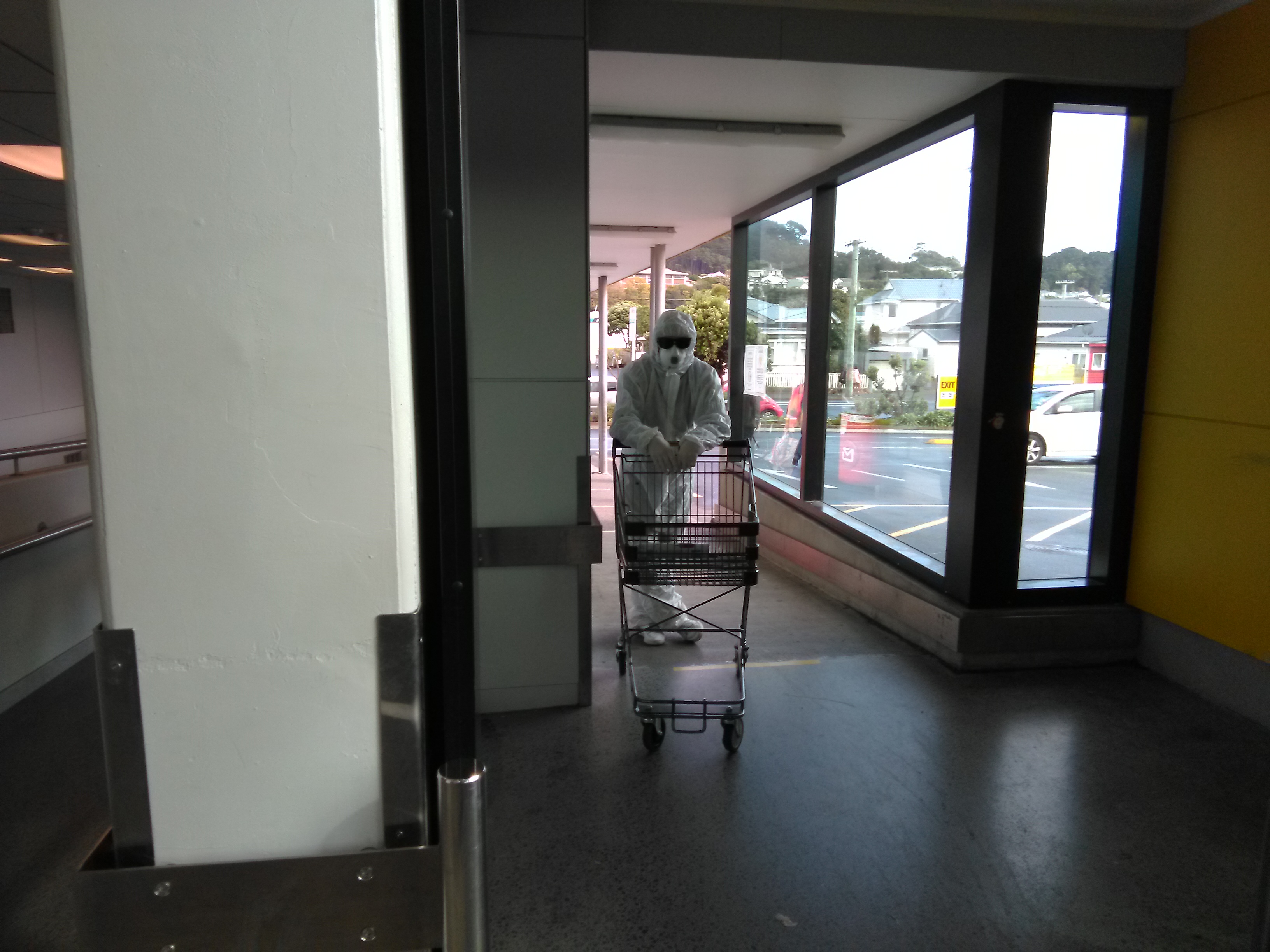 Once the groceries have been dropped off, each and every packaged item had to be individually wiped down with a cloth soaked with antiseptic. Fruit and veg – washed. Because there was no way of telling who had handled any of the items and what micro-organisms they had left behind on steel cans, plastic wrappers/bags,  cardboard cartons, and fresh produce.

The future is well and truly upon us.

The drive home at 8pm tonight was quiet. Once I hit the motorway, traffic all but vanished. There were moments when I was literally the only person on the road in either direction.

I phone my partner. It’s now eight days since we’ve laid eyes on each other. We joke that after the next three (four? five?) weeks, we’ll have to get re-acquainted with each other all over again.

Her “bubble” is smaller than mine, but she’s so much safer.

Meanwhile, throughout the day, we heard stories of fools flouting the protocols not to socialise with people outside their “bubble”; of money-hungry businesses whining that they were “essential”; of tourists deciding that self-isolation did not apply to them. 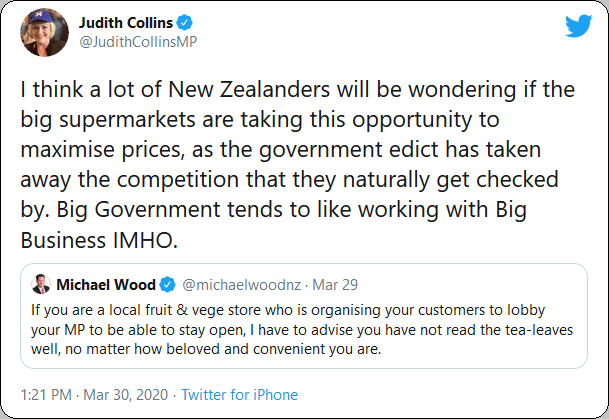 Ok then, let them all open. Every single business. Then, when we have 10,000 deaths, maybe those same politicians will start to think, “Hmmm, maybe this wasn’t such a good idea after all…?”

Some people only take a crisis seriously when the body count goes double or triple digits.

When it comes to the safety and well-being of everyone in the community and when it comes to a few selfish dicks who put their own desires ahead of everyone else, I have zero hesitation in advocating going full throttle law’n’order on their asses. In fact, I have the perfect sentence for those convicted of flouting the stay-home edict: home detention. (Just  make detention double or treble the month long lock-down.) It makes perfect sense when you think about it.

Ironic isn’t it? How the Right are always bleating on about personal responsibility; law and order; and maintaining society.

Except, of course, when business is threatened.

RNZ: Coronavirus – Looking at the numbers

Twitter: Judith Collins – competition for business during a pandemic – 30.3.20

The Daily Blog: Malcolm Evans – A Letter to the Kids