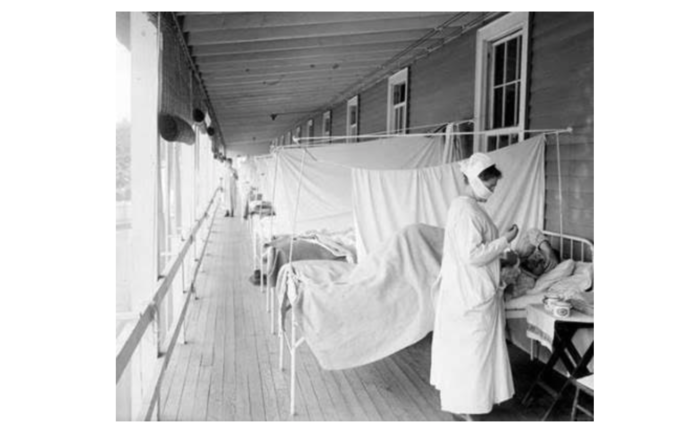 WHY WERE SO FEW lessons learned from the deadly Influenza Pandemic of 1918-19? The current best estimate of the death toll from “Spanish Flu” (which actually originated in the United States) is 50-60 million – many times the number of people killed in the First World War. With the global population estimated at 1.8 billion in 1918, the Spanish Flu killed 3.0 percent of all the human-beings on earth. In the face of such stunning mortality, national governments might have been expected to pledge themselves to doing all within their power to prevent a recurrence. Why is it that in every city, town and village of New Zealand memorials abound to the 18,000 men who fell during the four years of the First World War, while only a handful recall the 9,000 victims who perished in just six terrifying weeks at the peak of the 1918-19 pandemic?

The answer lies in the extraordinary degree of censorship imposed upon their citizens by all the governments engaged in the First World War. In order to “maintain morale” on “the home front” it was considered vital to shield the families and friends of the men in the trenches from the realities of industrialised warfare. Great Britain’s wartime Prime Minister, David Lloyd-George, famously told a journalist friend: “If the people really knew [the truth] the war would be stopped tomorrow. But of course they don’t know and can’t know.”

That they were required to post casualty lists numbering in the tens-of-thousands was bad enough. Belligerent governments (including our own) were absolutely determined to keep the soldiers’ loved ones in blissful ignorance of the way their sons, brothers and husbands had died – and of how little was gained by their sacrifice.

As the death-toll mounted and the horrors of the war multiplied, political and military leaders found themselves holding a tiger by the tail. They had kept so much hidden, from so many, for so few tangible gains, that they had no option but to keep hiding the truth from their respective peoples. To make their job easier they cultivated an atmosphere of extreme intolerance for any behaviour or expression capable of being construed as dissent or disloyalty. Those found guilty of opposing the war (future New Zealand prime ministers among them) were imprisoned. Kiwi conscientious objectors – most famously Archibald Baxter – suffered the infamous tortures of “Field Punishment No. 1”.

It was into this fraught environment that an avian variety of influenza crossed the species barrier into pigs, and then into humans, on a Kansas farm early in 1918. “Patient Zero” was an infected farm boy who carried the virus with him to military training camp, from whence it travelled with infected troops to the battlefields of France and Belgium. In a terrifyingly short period of time it had been carried back into the home countries of the infected soldiers. The death toll rose relentlessly and exponentially: the virus killed hundreds, then thousands, then millions.

And the authorities deliberately muted their official response. In Britain and its empire especially, which was staring down the barrel of a German victory in the early months of 1918, the political and military leaders were desperate to keep any suggestion that, back home, their loved ones were falling like ninepins from their fighting men. With revolution raging in Russia, Allied politicians were in no mood to allow the Bolshevik “virus” to spread.

In frightening anticipation of the policy of the current British government, the pandemic was simply allowed to “let rip” among Britain’s helpless and unprotected population. Perhaps the most tragic moment came on Armistice Day, the 11 November 1918, when hundreds of thousands of citizens were permitted to gather in the streets, hugging and kissing, to celebrate the war’s end. It is difficult to imagine a more effective way of hastening the virus’s spread!

Obviously, local measures were taken to keep people safe, but with censorship still in place, the pandemic had burned itself out before its worldwide impact was generally comprehended. Every one the virus could get had been gotten, there was no one left to infect.

Tragically, the appalling decisions of New Zealand politicians and military administrators, both at home and in our newly acquired colony of “German Samoa”, allowed the virus to come ashore and do its deadly work. The ship returning William Massey, New Zealand’s prime minister, from Europe had reported the infection on board but was, astonishingly, allowed to dock. No one, seemingly, had the courage to order the PM placed under quarantine. The New Zealand military officer “in charge” of Samoa, was similarly informed that there was sickness aboard an arriving vessel. He, too, permitted its passengers to disembark. The virus swept across western Samoa, killing upwards of a quarter of the territory’s native population.

If you look hard, it is possible to locate the burial sites of the 1918-19 Influenza Pandemic’s victims. Row upon row of tiny gravestones, or, verdant swards of cemetery lawn marking mass graves. Very occasionally, there is a larger memorial. The reality, however, is that the horrors of the pandemic were simply rolled-up with all the other bloody horrors of the war. People were encouraged to merge these two, equally dreadful, global experiences into a single tragic narrative which was now – praise be to God! – over. Best not to dwell. Best not to ask too many questions. Best not to learn too many lessons.

And yet, some lessons were learned. In 1920 the Health Organisation of the League of Nations was formed, building upon the rather haphazard pre-war efforts to co-ordinate the international fight against deadly diseases. In 1948, following a second, even more appalling global conflict, the now defunct League’s Health Organisation morphed into the World Health Organisation (WHO) of the newly former United Nations. It is no accident that one of the core principles of the WHO is the early, accurate and comprehensive communication of “outbreak” data across the planet.

Political and military reluctance to rapidly and truthfully acknowledge, and then take steps to combat, outbreaks of highly infectious and deadly disease, as happened at the end of the First World War, is every bit as dangerous to public health as the deadliest virus. Such is the grim tutorial from the Influenza Pandemic of 1918-19. It is to be hoped that the governments of the United Kingdom, the United States – and New Zealand – are paying close attention.