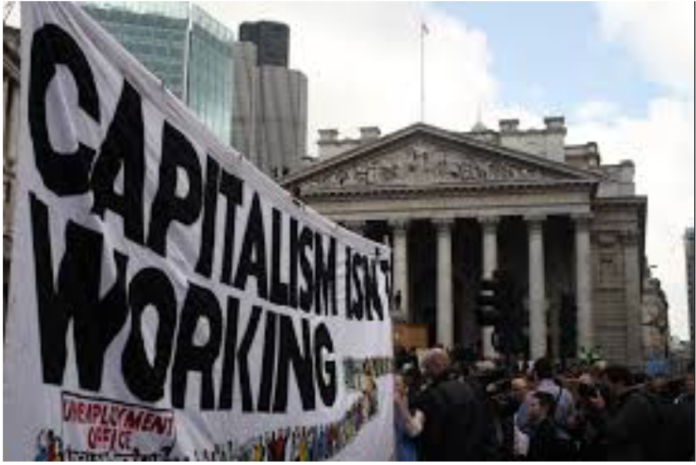 The coronavirus pandemic coming on top of a global economic slowdown fused with climate breakdown will be more than enough to tip the world into depression. And when it happens it will be the last depression. China which produced most of the goods to pull the rest of the world out of the GFC cannot do the same today. Central banks are already on close to zero negative interest rates. Bosses are in a panic and its about their survival, or ours, the working people.

So we are now down to scraping the bottom of the barrel. The global capitalist economy is on a drip feed of state spending printed money that we working people will ultimately pay for out of our labour. Unless we refuse.

All of this is glaring at us in the face. So why should we lie back in compulsory isolation and let the rotting capitalist system get transfused with our blood. If there ever was a Disaster Capitalism is it now. And that is saying something after several major depressions and world wars. Isn’t it time to say that there is a way out other than yet again bosses’ making working people pay with our livelihoods and our lives? We must say, no more!
We know that the bosses’ state will print money to bail out the corporates whose interests the state serves anyway. Parliament is a talk shop to keep the masses diverted from the real business behind the facade of democracy. But the real business is now bust and Parliament stands exposed.
So lets say NO. Your crisis is our opportunity. We will not die while you insulate yourselves in your bunkers. We will not pay for your luxury with our wages and taxes. Your profits are nothing more than our or accumulated surplus labour anyway. So we won’t be falling for disaster capitalism this time, we want survival socialism!
So when the assorted capitalist regimes from Boris to Donald to Modi to Jacinda all come out with rescue packages that will keep the bosses’ businesses alive we must reject handouts to the rich in our name since we will pay for it. The bosses’ and their political stooges have preached neoliberal doctrine at us for decades swearing by the market as our saviour.
Now they are turning around and saying, the state must save us all in the national interest. It doesn’t embarrass them in the slightest that this is the repudiation of their free market shibboleths and it is us workers who are paying for the bosses’ welfare state. So lets stick it to them.
In the place of rotten capitalism rooting us with its disaster capitalism, lets say no, we want survival socialism. So when business complains that the state must pay for their lost profits we say no, you are bankrupt. We won’t be fooled that the state subsidizing our wages makes your viable.  That goes out of our pockets into yours.
Prove that your deserve to exist by paying market wages, paying us for sick leave as long the pandemic threatens, or if your so fragile and can’t survive in a rotting capitalism which makes workers die for your profits, you should end in the scrap yard.
Instead of state spending to revive dying capitalism and the further destruction of nature, workers must demand that any state subsidies to business have to be on the terms of the majority of working people. If ‘public health’ is to mean anything but a healthy workforce to be exploited, let’s redefine it as a healthy publicly owned economy.
This means instead of handouts as bailouts, the state should take shares of the same value as public assets. But to qualify, firms must be productive of goods that we need, growth must be sustainable, carbon negative, and not at the expense of nature.
Moreover, since we, the workers make the wealth, part of which you claim as reward for your  failed entrepreneurial skills, we demand to set the terms for sharing our wealth with you. We will take over the running of the business and employ you as manager under our supervision.
If the bosses refuse our terms and close down the business, those that are viable we will take back its assets are our expropriated wealth, and run it under workers’ control. As we can’t run businesses without capital, we want to expropriate the assets of the shareholders of the big banks (not the working customers’ assets) and create one big development bank to fund social production.
If the business is worthless and we are left unemployed we demand that the state pays us redundancy and an unemployment benefit we can live on. By the way, we are the ones who know what our cost of living is, not some bureaucrat paid to make it up.
The current compounded disaster proves one thing: that the tiny minority of wealthy owners of capital have shown they cannot profit anymore by destroying nature, by making workers pay for their crisis, and by creating conditions that allow pandemics to rage through the working population, while the rich retreat to their resorts.
And since capitalism was build on centuries of stolen labour value produced by workers, we will take it back to finance survival socialism. This will allow us to scrap the market chaos which piles one disaster upon another, and were scarcity, poverty and misery is our fate.
It  will allow us to plan and build a socialist economy where assets are jointly owned and controlled by the working people, and were production for need rather than profit is the goal; where each works to their ability and gets what they need; where living conditions are sufficient for a healthy, good life, in harmony with nature.
Of course no capitalist government will do any of this as their loyalty is to the ruling class. So working people as the big majority need to build their own movements and parties to the point where they have the power to impose their control on the economy and have mass support for a working peoples’ government able to implement survival socialism.
We have to do this for humanity to survive all these crises now accumulating as a terminal crisis. We had better start building now.