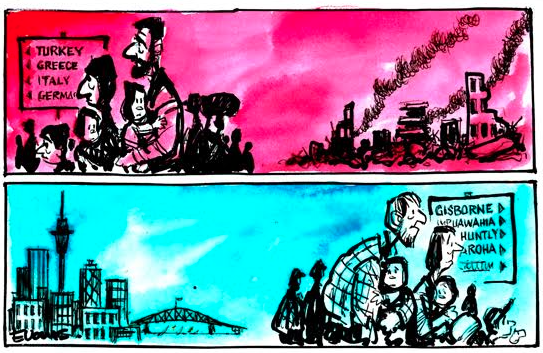 The latest figures by the Ministry on Social Development show that benefit sanctions are increasing and a record number of families are requiring hardship grants to cover basic expenses such as rent and food, due to low benefit levels that are below the poverty line. Hardship grants numbers went up 67% in a year, from385,043 for the quarter ending December 2018 to 573,851 for the quarter ending December2019.

The nation had just witnessed on prime time TV, New Zealanders living in cars and there was outrage that in the Land of the Long White Lie, our tender sense of egalitarianism should be spoilt by seeing fellow citizens living in such squalor.

The property speculation bubble that made the middle classes feel so rich was helping create this obscene homelessness pressure alongside National’s refusal to build any new state houses (preferring to sell them) and the meth hysteria that Paula Bennett was pushing that saw hundreds kicked out onto the street.

It came as a shock to see the fruits of that spiteful harvest erupt onto our TV screens and New Zealanders demanded something to be done.

So John Key was frantically trying to do something. He announced that the situation was under control because Government agencies had tagged along with the Salvation Army  and those people needing help would be shortly receiving that help.

Less than half a day after John Key made that statement, the Salvation Army posted a furious response stating that the Prime Minister was lying and that no state agents whatsoever had tagged along.

What the Salvation Army knew that John Key did not not, was that if the vulnerable whom they service suspected for a millisecond that the hated and cruel agents of the Government were tagging along, then those vulnerable communities would flee in fear.

This is the horror of the neoliberal welfare state, interconnected ‘welfare’ agencies who have only draconian policies to employ. People would prefer to live in their cars than open themselves to those spiteful state actors.

From WINZ to Oranga Tamariki, State Housing and ultimately the Police, vulnerable people run as fast as they can away from the G Man and his ‘help’.

They know once you are in their system, they will rape your dignity and rip your rights away.

The intense pressure put on Key forced the National Government to open up their housing grant and when challenged on the ballooning numbers, Bill English confessed to being surprised by the hidden number of homeless.

Again, this was because vulnerable people were too frightened to come forward, but when the housing grants were forced to adopt green lighting all applications, those hidden homeless came forward, only to find out that the Government considered the grant a loan and were demanding the money be paid back.

This is the new nature of welfare in NZ, a loan with high interest plus punitive sanctions for obtuse rule breaking as decided by a WINZ sadist.

The reason why the vulnerable are once again timidly coming forward is because they think Jacinda Ardern’s ‘politics of kindness’ actually means something. That’s why hardship and beneficiary numbers are going up because despite the toxic cultures inside WINZ and MSD, the vulnerable believe in Jacinda.

The truth of course is that they shouldn’t believe in Jacinda’s kindness because the sanctions are still going up and the toxic culture of WINZ has no intention of changing and seeing as Labour are simply too frightened of the public service unions to demand a culture change, the poor are the ones left to suffer waiting outside WINZ offices at 2am in the morning.

National’s solution is more penalties and more sanctions so that it goes back to the way Welfare was run under them, by being so punitive and terrifying that the poor don’t dare enter WINZ in the first place.

It is a malicious nation built upon stolen land who would gleefully elect  political parties whose appeal is to use desperation and hunger as a means of control over the poor.

We are that nation.