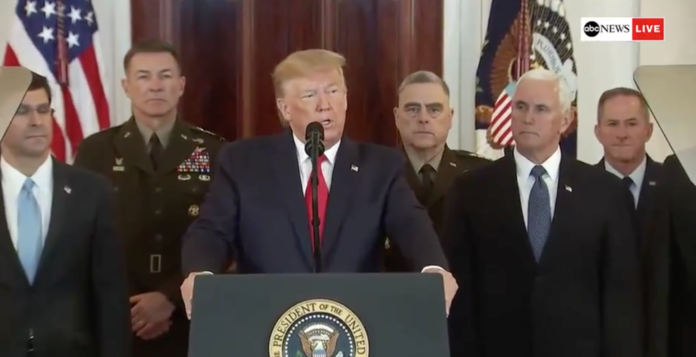 Caught between Iraq and a Trump space.

Flanked by his Military Generals, like a true dictator, and after promising war crimes by attacking Iran’s cultural assets, Trump stumbled into his delayed speech like a drunk fat Uncle arriving at a  amily event he hasn’t been invited to, so he could explain to the planet what the hell he thinks he’s doing assassinating Iran’s top General and what he had to say was his usual self justifying trash mixed with the promise that the leash has been put back on him and a de-escalation could occur.

Trump is not only re-writing history, he’s imposing his delusional reality on the rest of us – Iran started playing up after HE pulled out of the deal Obama negotiated and he pulled out of that deal just because Obama was the one who negotiated it! He’s a liar trying to justify the unjustifiable pettiness of his original decision.

His lie that America just handed over hundreds of millions in cash to Iran for shits and giggles has always been a favourite falsehood of his. America froze Irans assets at the time of the uprising against America’s coup, that was Iranian money and to move forward on an agreement, the Obama Administration had to pay the Iranians back that money that America froze.

That wasn’t just some sweetener to a flawed deal, that was returning stolen property so that a deal could occur!

This idiocy is best explained by the manner in which the decision to assassinate was arrived by.

As horrific as it is to write, since the September 11th terror attacks,  the military always presents the President with an option that is far too extreme to actually enact and because of its extremeness helps direct the President to the option they want, in this case however Trump went with the most extreme option which shocked the establishment and led to Soleimani’s assassination.

That’s right, this entire murderous extrajudicial fiasco was caused by a failed Jedi mind trick the Military establishment use to direct the President’s actions.

I wish this wasn’t true but it fucking is…

Pentagon officials reportedly offered US President Donald Trump a list of options for dealing with escalating tensions with Iran. Trump ultimately chose to target a senior Iranian military official, Qassem Soleimani, who was killed in a US airstrike late Thursday.

The New York Times’ Helene Cooper, Eric Schmitt, Maggie Haberman, and Rukmini Callimachi reported on Saturday that Trump was given a “menu” of choices for dealing with Iranian-led violence against American targets in Iraq.

The officials offered the option of killing Soleimani mainly to make the others seem more appealing, which The Times described as a common tactic for US officials advising presidents.

Trump initially elected to strike the militia groups. On December 29, the US military struck three locations in Iraq and two in Syria controlled by an Iranian-backed militia, The Times also reported.

But after protesters supporting the militia stormed the US Embassy in Baghdad on Tuesday, Trump went for what The Times said was the “most extreme” option of targeting Soleimani. The Times noted that Presidents George W. Bush and Barack Obama had decided against targeting Soleimani because it was “too provocative.”

…so he almost ignites a war because he’s in an imaginary pissing competition with previous Presidents and he’s selected an extreme option the Military didn’t even want him to take???

How the fuck is this how decisions are being made in the most powerful Office on the planet???

It’s like looking behind the scenes of Willy Wonka’s Chocolate Factory to see the Oompa Loompas chained in sweat shops while being sold into sex slavery.

I argued this had all the tell tale signs of a temper tantrum President lashing out angrily at a situation rather than a Machiavellian genius secretly plotting war and everything we now know suggests that’s exactly what has happened here.

This orange dickhead is prepared to push the planet to war based purely on whatever tantrum is dominating his current revenge fantasy frontal lobes.

This de-escalation isn’t the wisdom of cooler heads prevailing, it’s the establishment reacting in shock at their idiot President swerving so wildly off the beaten trail begging him to pull back.

Trump is intellectually unsuitable for this job and he blunders from one self made crisis to another. All we’ve learnt from this sorry episode is just how dangerously erratic Trump’s impulses can be and for a man who can launch nuclear weapons, that is a vastly less safe planet for us all to cohabit on with him.

The sooner this circus freak is removed from Office, the safer we will all be.