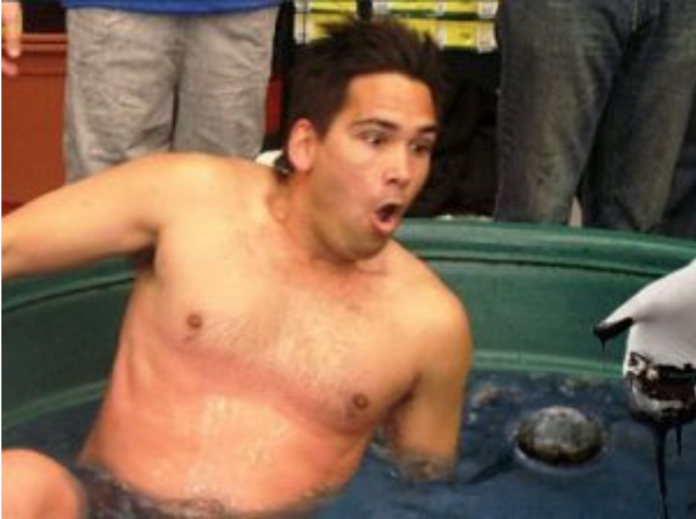 Simon Bridges has described police as “glorified social workers” and is urging them to be tougher on Extinction Rebellion protesters who vandalised his electorate office.

Bridges, National Party leader, told Magic Talk while he thinks it’s important people have the right to protest, the vandalism against his office in Tauranga was “unlawful”.

“I’ve got workers who will be turning up there and will spend – I presume – a couple of hours or more cleaning this icky stuff off and that’s not right.”

…now does Simon Bridges deserve this kind of specific targeting by Extinction Rebellion? Oh of course he does because of his highly secretive role in the manner in which activists were spied on during his time at the Ministry of Business, Innovation and Employment…

Bridges on Thompson and Clark spying: ‘I never had anything to do with this’

Former National Party ministers are being forced to defend the activities of private investigators under their watch, saying they didn’t know about any unethical activity.

The State Services Commission delivered a damning report into the use of companies like Thompson and Clark to carry out surveillance on protestors, activists and other members of the public, as well as inappropriately close relationship between investigators and some public servants.

The Commissioner described the way some agencies allowed some New Zealanders to be targeted by investigators as an affront to democracy.

Two agencies for which National Party leader Simon Bridges had ministerial responsibility in the last government featured in the report – the Ministry of Business, Innovation and Employment and the Transport Agency.

It found Thompson and Clark was portraying so-called “issue motivated groups” including Greenpeace, the Green Party and iwi groups, as security threats.

One of his more notable public gifts, however, was the legal expertise he deployed in the framing of the legislation prohibiting seaborne protests aimed at impeding oil exploration in New Zealand’s territorial waters.

That expertise was a long time in the making. Bridges learned the lawyer’s trade here in New Zealand, at Auckland’s Law School, and then among the dreaming spires of Oxford University. In the course of his training, Bridges studied not only how the legal system works, but also what the Rule of Law is intended to protect. As a keen student of history, he must have known, even as he proscribed them, how important the rights of the citizen have always been to the proper functioning of a democratic state.

That Bridges was willing, coolly and efficiently, to curtail New Zealanders’ protest rights, would not have gone unnoticed by his political patrons (among whom were John Key and Steven Joyce). They had set him a test – and he had passed it with flying colours. In order for Bridges to become a successful statesman, his political peers needed to be convinced he had it in him to put his most cherished ideals to the sword without flinching.

That, too, would have been a factor in Simon Bridges’ successful campaign to become the National Party’s twelfth leader.

It is one thing to have the accent of a “petrol head” from West Auckland: more important by far, however, is how well a leader of the National Party is able to speak the language of power. That New Zealanders know much more about the former than the latter is proof of just how little political reality they are expected to bear.

Last week, documents released to the Labour Party revealed that Government Ministers Steven Joyce and Simon Bridges had met with oil giant Shell to thrash out a back-room deal to criminalise protesting at sea.

There’s nothing new here – it’s called crony capitalism and it’s something that the John Key Government does well. It’s his bread and butter. You take a company – in this case New Zealand Inc – and you use it to line the pockets of your mates.

Yet, it seems that in a desperate attempt to show that the Government is wagging its own tail, Simon Bridges has been caught out misleading Parliament. Originally telling Parliament that he had had no contact with oil companies about the controversial law changes, it has emerged that he had met with Shell just weeks before making his draconian decision.

No details of that secret meeting have so far been released, but at a previous meeting with Government, Shell expressed their concern about offshore protests. Simon Bridges then presented to Cabinet that:  ‘the upstream oil and gas industry has sought a more robust government response to threats of, and actual, direct protest action’. A month later it was passed in to law. 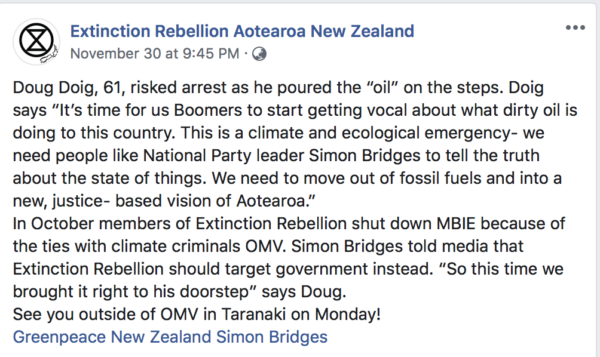 …thanks to our none existent short term political memory, the poor cherubs aren’t even aware of the accusations against Bridges in terms of activists being spied on or even any awareness of what he did to help oil companies increase penalties against protestors.

Extinction Rebellions should be pissed because Simon Bridges secretly met with oil interests to ram through a new law prosecuting deep sea oil activists and mislead Parliament about that meeting,  all the while his very agency was pushing through that law change committing unethical spying actions against Greenpeace, the Green Party, the MANA Movement and local Iwi protesting possible oil pollution.

Our Planet May Be Barreling Toward a Tipping Point

When we’re talking about social justice, a tipping point is a beautiful thing—a court case that shifts public opinion, for example. For a species, a tipping point can spell doom, as an environmental catastrophe pushes a population to the brink. When it comes to climate change, there isn’t just one tipping point but many that scientists are increasingly pulling into view.

Today in the journal Nature, a group of researchers argues that we’re closer to tipping nine climate demons than previously believed, and that we’re already starting to see some associated effects. “We argue that the intervention time left to prevent tipping could already have shrunk towards zero, whereas the reaction time to achieve net zero emissions is 30 years at best,” they write. “Hence we might already have lost control of whether tipping happens.”

Dictionary.com names ‘existential’ as word of the year

How did 2019 make you feel? Surely there were highs and lows, but if you spent a good portion of the year that was feeling concerned with the nature of your existence, then Dictionary. com understands. On Monday the website announced that it has selected “existential” as its word of the year for the 2019, and explained why through the lens of Toy Story 4 breakout character Forky.

“We know what you must be thinking: Forky? The dictionary? 2019?” Dictionary.com’s write-up begins. “Well, the thing about Forky is, his dilemma actually speaks to a broader theme of threat and crisis reflected not only in culture and news, but also in our dictionary work throughout this year. High-stakes events around the world involving climate change, gun violence, and democratic institutions were some of the top news stories. And words about these events, from polar vortex to stochastic terrorism to exonerate, were top searches and trends on Dictionary.com. Notable among searches was existential, which we’ve chosen as our Word of the Year for 2019. It captures a sense of grappling with the survival — literally and figuratively — of our planet, our loved ones, our ways of life.”

‘A lot of suffering’: Grim 3000yo warning about to come true

In 1200BC, the world’s most advanced civilisations — Egypt, Assyria, Cannan — were burnt to the ground all at once.

It was the era of the Biblical Exodus and the poet Homer’s Trojan War.

A convergence of catastrophes made these nations weak. And it’s happening again.

…when the enormity of what we are facing dawns on more and more NZers, spilled symbolic molasses will be the least of Simon’s concerns.