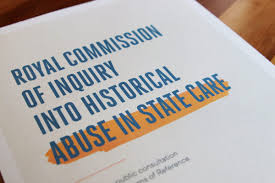 The Abuse in Care Royal Commission of Inquiry Contextual hearing returns for its final day today 10.00am at the Rydges hotel in Auckland. Commissioners will hear from three witnesses. Witness evidence summaries are outlined below.

After witness speak, their full evidence, along with footage of them speaking, willavailable for download here.

The hearing is being live-streamed at: www.abuseincare.org.nz/public-hearings/live-stream/

The Contextual hearing is open to media and the public.

Mr Ledingham will give evidence about the abuse he and his two brothers experienced at the hands of a priest while students at St Joseph’s Catholic School in Onehunga (as detailed more fully in the published book “The Catholic Boys”). He will outline the effects of the abuse on him and his brothers, the impacts on his life, choices and opportunities, and the response of the Catholic Church when they were notified of the abuse against the three brothers in 2002. Mr Ledingham will ask the Royal Commission to hold the Catholic Church accountable and suggests some recommendations the Royal Commission could consider.

Professor Cahill and Dr Wilkinson will address the following issues in their presentation:

1. A summary of the various international Government-sponsored and Church-sponsored inquiries into child sexual abuse by Catholic priests and other religious groups since 1985 when the first such inquiry was held in the US, and the care and safeguarding initiatives that resulted, as well as their findings and recommendations;

2. A summary of Volume 16, Books 1 – 3 of the Report of the Australian Royal Commission into Institutional Responses to Child Sexual Abuse which dealt with religious institutions, especially the Catholic Church, the Anglican Church, the Orthodox Jewish community, and the Jehovah’s Witnesses. This includes addressing how the care mechanisms failed where the needs of religious personnel were placed ahead of those of the victims;

3. An explanatory roadmap to understanding the very complex phenomenon of clerical sexual abuse of children and vulnerable adults and the various constellations of intersecting variables that have led to clerical sexual abuse in the Catholic Church. This includes governance structures, such as diocesan autonomy, as well as highlighting the selection of candidates for priesthood, issues relating to seminary training, and the inculcation of clericalism;

4. Prevalence data into clerical sexual abuse, drawing on Australian, German and US data sources, as well as sexual abuse in other religious institutions, especially in the Anglican Church, the Salvation Army and amongst the Jehovah’s Witnesses;

5. A reflection on the New Zealand context and the similarities and differences with comparable nations; and

6. The possible ways forward based on a survey of recommendations made to date.