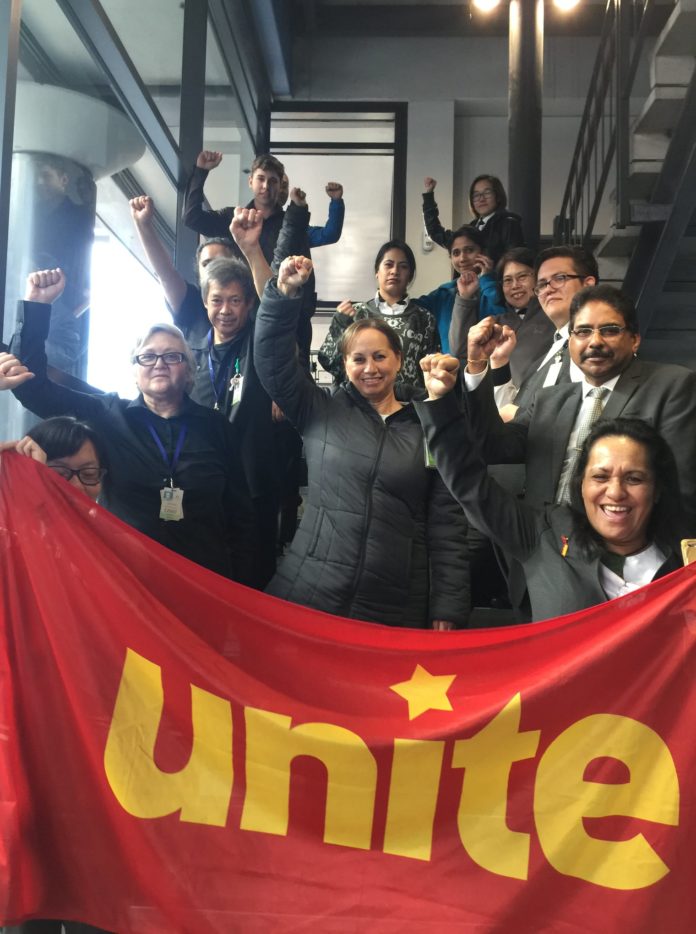 Workers in SkyCity have just come through a traumatic few days. The massive fire at the Convention Centre was seen by many of our Christian union members as an act of God – “Babylon is burning”. A company that has invested so much in property and so little in staff, seems to have been judged.

The convention centre itself was worth over $700 million. The delays to it netted the company $40 million. They sold the carpark for $220 million. They sold Darwin for $188 million, and they made a profit this year of $171 million. This is a company with over half a billion dollars in the bank, if you add those figures up, and yet it begrudges 3000 workers $20 million between them to Bring Back the Weekend [time and a half for being forced to work unsocial hours]. When workers ask for $20 million it sounds big but compare that to, say, the piece of land that SkyCity bought down in Queenstown, that they will be building a hotel on. That piece of land cost $15 million. So there’s loads of money for property projects and big flagship things. But there’s nothing at all for the workers. Unless you want to be an Etu style union and go for a 3 percent pay deal. We don’t.

Workers in New Zealand are fighting back, whether they’re nurses, teachers or busdrivers and workers in the private sector where they’re lower paid workers who need a lot more than 2 or 3 percent to pay rent, never mind buy houses. So that’s why we went for the Back to the Weekend campaign with them. But the last couple of days have clarified, like hot melting steel, the difference between them and us. Where they value making money more than people’s lives. And the staggered and cascaded evacuation of the building when we were facing hazard shows you everything you need to know about this company, that they were trying to keep the money-making side of things open for as long possible when it was very clear there was a major threat to our health and safety.

It was the smoke we were breathing, which people could smell on the gaming floor when I first hit there about 1.45pm. The carpark I arrived into was already heavy with particles and toxins. I just kept thinking the whole way through the blur of activity that we had arrived in a 9/11-style situation. There was black smoke up there, people coughing in the lifts, and I’m going ‘we just need to continue doing what we have to do’. We had to continue trying to get people out as quickly as possible. I was trained, and I think most people are trained, that when you see smoke, you get out of there. Get out, get as many people as you can, check all the doors, check all the seclusion spots and make sure everybody is out as quick as possible. No time to get your keys, your things… just get out of the building. But I think SkyCity management were like, ‘the fire was in another building…’

The corridor where the union office is also has the health and safety hub beside it. And the H&S hub came down and we all cracked out masks together, as many as we could. The masks we were giving out to people I discovered were less than nothing, they’re dust masks. They don’t protect you from fire, from particles. Perhaps the bigger bits but not the fine particles. And that’s the stuff that kills you. If you look at the police down there they’re wearing proper sealed masks with filters on either side and that’s what you need for workers. You need 1000 of those in a workplace like that if there was a risk of fire and people are waiting in a corridor for a bit. Now they cost $80, multiply that by 1000 and that’s $80,000 – but guess what? That’s what it costs for a workplace to be safe. And if we’re like a canary in the mine here, then every workplace in New Zealand should have proper breathing masks, not dust masks, in the event of a fire.

Between the time we arrived at 1.40pm and maybe 4pm I was trying to actively shut down as much of the place as possible. I raised the alarm on the gaming floor, where people were playing blackjack, poker. And I yelled ‘Do you smell smoke in here!!’ Everybody knew, you could smell and see the smoke. The workers wanted to go. The workers replied ‘Yes!!’ Then we need to go! Then the managers came over and said ‘Joe, stop agitating. Stop your members shouting at us, we’ve got a plan’. Well, if you’ve got a plan, let’s go!

Their plan was cascaded closure, bit by bit. Keeping sections of the place open. Down in Federal Street all those signature restaurants were still open, Masu, the Depot, the Grill, Federal Deli. All still open. I took some of those workers out and I pointed to the sky, where it was black with smoke and said ‘I don’t think anyone’s going to come and get coffee today. I think most people are getting out of this area and I think you should too.’ The Asian migrant workers in Masu were clearly terrified. The Dms looked confused. And they’re like ‘Well we haven’t had any instructions from management’. And I say ‘Well I’m a union health and safety officer and I’m telling you now, move! Let’s go. Because that’s what the police are saying and there’s a police commander and a fire brigade commander trying to close down that street and evacuate it.’

It was worse than that. Until a quarter to six there were workers, working in a convention centre across the street in Federal where there was a convention of the NZ institute of Financial Services or something like that, and these people could see smoke, the clients could see smoke and some of them started leaving but there was no clear instruction like ‘Sorry this conference is over; we need to evacuate this building’ until 5.46pm. FOUR hours after the original fire. Because again, I think they think the hazard is fire not the stuff that people are breathing.

There was an [interview] done yesterday, on Seven Sharp with an atmospheric chemist who works in the University of Auckland who went down and took a sample of the air there for 12 hours and came back with filters. And he compared the normal filter you get in Auckland, which has a bit of stuff in it but still fairly white, with a completely black filter. The people in 9/11 got sick not because they got burnt, but because of the stuff they were breathing in. If the company was allowing workers to breathe this stuff in for four hours, they’ve been criminally negligent. If they thought that dust masks were safe enough for us, then they’ve been criminally negligent. And if there weren’t enough masks for all the workers in that place, then they’ve been criminally negligent. And that’s where we are at. Huge anger from our workers.

SkyCity is trying to force people back tonight even though yesterday they said they could have a full day off today. The benefit of being in a union in situations like this, is that we know when a contract is a contract. And that was the contract they made yesterday. Our workers have made plans to be with their families and so on so we’ll stick to that. And it shows you, like with Back to the Weekend campaign, this contemptuous disregard for workers’ plans, for their own family time. It’s ‘oh we’ve just changed our mind’. Well no you haven’t actually. There’s a union here who will take you up on this. And you also haven’t given us the health and safety report. We need to be satisfied. And we need to be involved. We’re not just an afterthought that you get a tick from.

You need to listen to us about our health and safety concerns actually because we are the workers. Corporate is not going back until Tuesday but we’re going in today to clean up for you? I don’t think so. What are we touching? Have you got Hazmat suits for us? Have you got proper breathing apparatus? You say it’s fine but… The police don’t know, civil defence doesn’t know, when it’s safe to go back. So we can’t go back on the say-so of SkyCity. We need an independent set of eyes on this. And it shouldn’t just be corporate deciding.