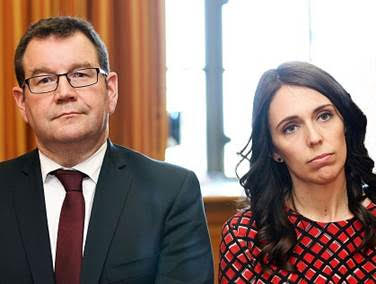 IS THAT IT? The resignation of the Labour Party President, Nigel Haworth, and the departure of the young man at the centre of the allegations currently engulfing the Labour Party? Is that the sum total of the axe-wielding? That, and the QC’s inquiry? Is nothing more being contemplated by the Prime Minister and Labour Leader? Will the hungry gods of politics be satisfied with such a meagre offering?

The thing about the hungry gods of politics is that they, unlike the mere mortals who populate the Press Gallery, see all. They look at the mess arising out of the Wellington Labour Party, and its diverse collection of players, and they see all the connections. To their ears are borne the names of every character participating in the drama. They cast their omniscient minds back, and mark every one of the faces that have already appeared on the stage. They recall their motivations; their towering ambitions; and they know. They know.

They know, for example, that had they not whispered in the ear of a depressed and demoralised Andrew Little, Labour would have collapsed to an unprecedented defeat in 2017. They know, also, that those whispers made it possible for Jacinda Ardern to step boldly into New Zealand political history.

When the hands of the political gods are on your shoulders, pushing you forward, there is very little on this earth that can stop you. Seeing how effortlessly Jacinda made her way to the Beehive’s ninth floor who can doubt it? Political commentators talk about Jacinda’s “stardust” – that mysterious quality which has lent so much lustre to her time in office. What they’re really talking about, of course, is magic. The magic she brings to the job. But, from whence does magic come – if not from the gods?

For every politician with cause to thank the gods, however, there are many more with reasons to curse them. Think of Grant Robertson. Think of how close he came to defeating Andrew Little in the leadership contest of 2014. Less than a single percentage point separated his vote from the successful candidate’s. So close. So close. But the gods of politics had other plans.

Their eyes were on Robertson’s running mate, Jacinda Ardern. She had stood at his side: loyal and obliging, as she had ever been. The media dubbed this duo “Gracinda” – a sort of political “Brangelina”. The other young people who worked alongside Robertson were also ambitious for their hero. Even in defeat they stayed with him. Even as his running mate climbed, seemingly effortlessly, towards the Iron Throne of leadership, their faith in his star did not waver. There are thrones, yes, but there are also powers-behind-thrones.

While Jacinda’s stardust was dazzling the voters, Robertson continued to do what he had been doing for the best part of twenty years – creating a Labour Party in his own image. Young Labour was his special vehicle. They could be seen at party conferences: eager bearers of the Robertson message. And there they were again, in 2014, crowding around “Gracinda”, brandishing professionally-printed placards celebrating “A New Generation” of leadership. Political debts were being accumulated by the MP for Wellington Central; debts that would, one day, have to be repaid.

Meanwhile, the political gods were raising-up and casting-down Labour leaders with gay abandon. First the hapless Phil Goff. Then the luckless David Shearer. Followed by the doomed David Cunliffe. Robertson was a willing tool in the hands of these delinquent deities. Wielding their knives silently and invisibly: conscious always that with every leader that fell, his own chances of inheriting Labour’s crown rose.

So close. So close. Just one more member of caucus. Just 100 more trade union votes – and the leadership would have been his. It was not to be – at least, not yet. But if he could not be leader of the party he could become the arbiter of its policies. Finance spokesperson may have been Little’s consolation gift to Robertson – but it was one he would turn to good use.

Guided by the éminence grise of Labour’s “Third Way” conservatism, Sir Michael Cullen, Robertson bound Labour in fiscal chains so tight that, in the unlikely event of a Labour-led government being formed, it would lack all freedom of movement. No matter how luminous the promises of “transformation”, without the money to turn promises into reality, the person making them was bound to end up discredited. Perhaps, at that point, the gods of politics would relent?

To make their job easier, Robertson did all he could to fill the key posts of Labour’s parliamentary apparatus with people sympathetic to his ambitions. The same members of Team Robertson who had laid low Cunliffe and his supporters were now running not only the party – but the country.

At least, they thought they were running the country.

The ever loyal and dutiful Jacinda was Prime Minister, but her grip on the evolution and implementation of policy was weak. If an instinctive and powerfully empathetic response was required, Jacinda could be relied upon absolutely. What happened behind her throne, however, had become the responsibility of others.

It was then that the gods of politics decided to play their little joke.

Robertson and his allies are not laughing. Events occurring behind Jacinda’s throne have been thrust front and centre. They have ceased to be the responsibility of others and become hers. As scandals involving Young Labour and close Robertson allies have inflicted enormous damage upon both her own reputation and that of the party, Jacinda has had the chance to measure the full extent of the loyalty and dutifulness of her parliamentary and party comrades.

On her overseas travels, as she mulls over the future of her erstwhile running-mate and present Finance Minister, the Prime Minister may recall with a mixture of irony and regret the words of the Ancient Greek playwright, Euripides:

“Those whom the gods seek to destroy, they first make mad.”