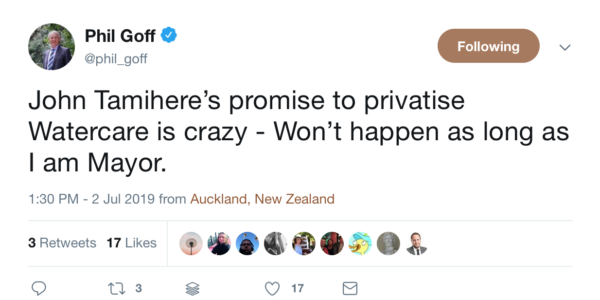 …interesting proposal by John Tamihere today on Auckland’s water. His out of the park proposal is to sell 49% of Watercare to ACC or the New Zealand Superannuation Fund means that all the desperately needed water upgrades could be fixed NOW instead of, as Phil Goff promises, within 50 years.

Let’s not forget, the ACC and NZ Super fund are NZ owned and both are desperate to buy into infrastructure to speed up the desperately needed upgrades.

Auckland is crucified by a lack of infrastructure, because of debt limitations, the council cannot borrow more to fix these upgrades. Tamihere’s proposal finds the money now, get’s the upgrades done now while ensuing the asset remains owned by domestic forces.

This is actually surprisingly clever.