Look, I feel for the homosexual community being offended & hurt by Israel Folau’s Instagram post, but spare a thought for all the drunks, adulterers, liars, fornicators, thieves, atheists & idolators out there who he also doomed to hellfire!

What if you are a happy drunk? Like, yes, you have a case of full blown alcoholism, but you are the life of the party?

I can understand angry or violent drunks going to hell as per Folau’s list, but happy drunks? That just seems needlessly broad.

Fuck the Idolaters though.

Folau’s Instagram post comes at a time when NZ and the Western world are struggling with the definition of hate speech and the decision by Australian Rugby (after immense pressure from the very rainbow friendly Qantas) to dump Folau seems like a tiny, tiny victory. 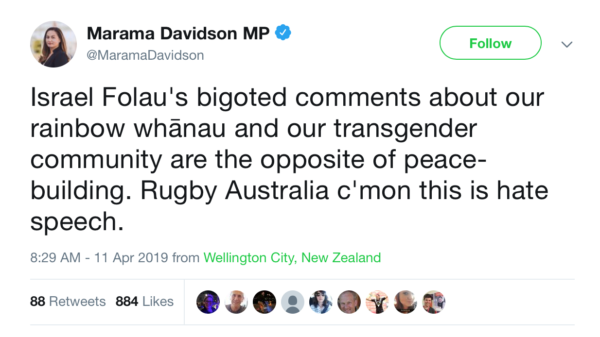 …while anothers is celebrated diversity…

…isn’t it a tad shallow & vacuous to be celebrating a rugby players sacking after his slightly homophobic list of the damned when Brunei announced death by stoning for homosexuality earlier this year?

Where is the cry to refuse all trade with Brunei?

Folau’s Instagram post is stupid speech (as opposed to hate speech) while Brunei represents death by stoning. It also seems a little hollow for Qantas to attack Folau, because they are partnered to Qatar Airways and Emirates. Qatar imprisons  homosexual acts, and the UAE punishes homosexuality with the death penalty.

It’s easy to scream at a Pacific Island Rugby player over conservative religious opinions on social media but far harder to stand up to actual state sponsored repression against gay communities.

In the age of subjective rage where the policing of micro aggressions trumps all objective reality this is a tiny win, however the backlash amongst those young men who see him as a hero will probably outweigh whatever point is supposed to be made here.

Liberal progressive democracies are supposed to be able to withstand and tolerate opinions that are offensive, buckling and proclaiming hate speech to everything we disagree with is likely to end in a cluster fuck of counter productive outcomes.

The totalitarian joy so many of the woke seem to be exhibiting in their online celebration at the sacking of a Pacific Island religious conservative rugby player seems like low hanging fruit at its most ironic and metaphorical.

If we’ve finished making Israel a martyr for homophobes, could we get on with the whole Brunei, Qatar and UAE divestments?

Cheering the demise of Folau is a cacophony of the woke hecklers veto, little different to the jagged shriek of a lynch mob or thump of the book burning storm trooper. All hail the new treasons as the worst with micro aggression policing & virtue signalling our new Gods.