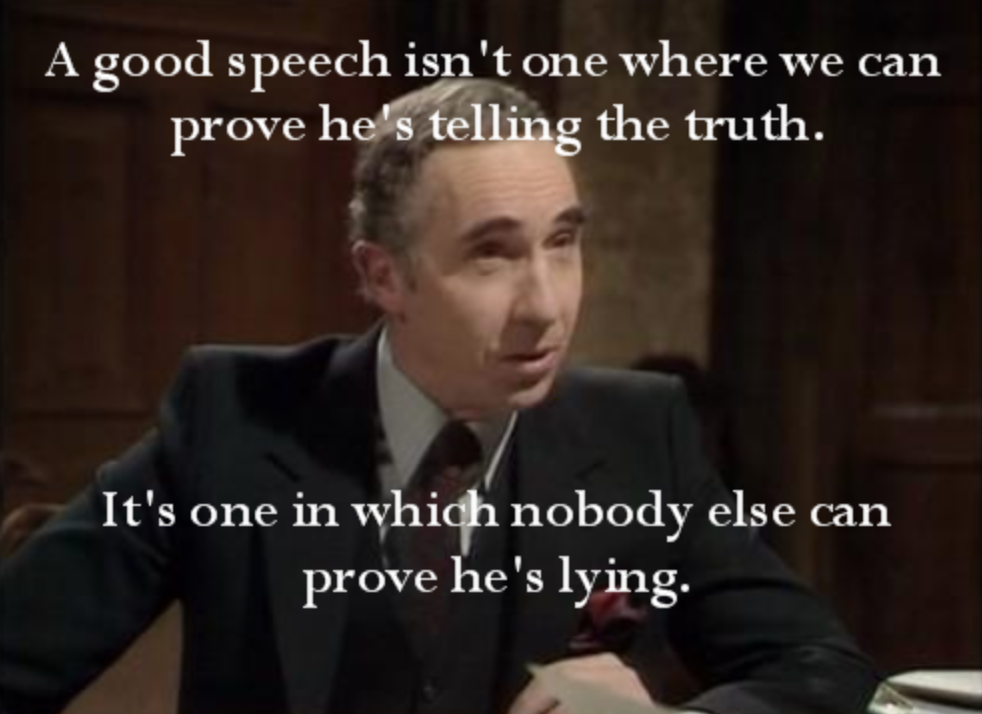 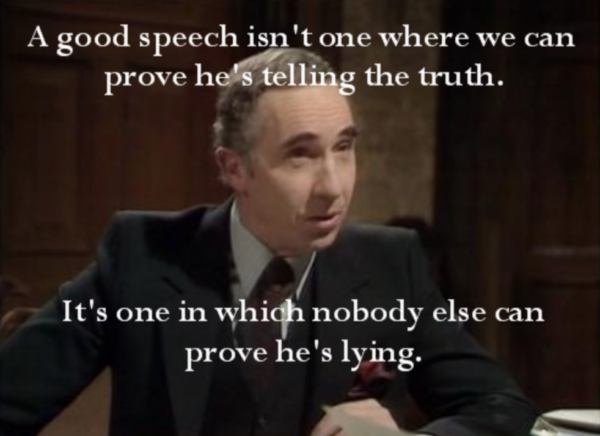 “She will have had a devil of a job trying to convince the Chinese Government that the red light given to Huawei’s involvement in 5G by the Government’s own spy agency the GCSB has nothing to do with her.”

Whether by design or accident, Audrey comes perilously close to identifying the conundrum, which in my view, is a serious threat to democracy as we think we have it.

Who rules this country?  The elected representatives or the Bureaucrats?

Most of us vote for a political party represented by chosen ones to carry forward policies of that party which identify with the passions or aversions of the disciples.

What we expect in our democratic state, is that our MPs will introduce laws and implement the policies of the party via the bureaucrats who inhabit the ministries (of e.g. health, housing, police etc).

The problem with this theory however, is captured by Audrey Young as above.  Who’s running this place?

Historically, NZ had neutral Public Servants who transferred from changing governments without favour or malice.   Muldoon’s and Rowling’s regimes might have seen the last of that altruism – if it really did ever exist.

Based on my exposure to the system, bureaucrats these days, tend to go into meetings with ministers (especially new ministers) with guns loaded.

For the purposes of this epistle, bureaucrat means a person with (usually) a minimum master’s level and often PhD academic background and possibly several years’ experience in a chosen field – e.g. marine biology and who has seen poorly qualified Members of Parliament come and go as the Minister responsible for “their” department.

I say, “usually” as a deliberate caveat as some Ministries are not served with higher learned advocates where objectivity tends to preside over subjective judgments.

No need to be a rocket scientist to work out that the bureaucrats, infected with the culture of, “we know best”, handed down from one generation to the next, tend to consider that “their” policies and plans for “their” ministry, are much better for the nation than the often ill-considered (sometimes laughable) inappropriate policies of a new government.

Maori Affairs Kore Wetere was one of the first to bring into his ministerial office, his own ‘experts’ – inside his tent so to speak – to counter the ‘expert’ advice (or pressure) that he was getting from various Ministry bureaucrats.

Roger Douglas emulated Koro with a vengeance.  Like him or loath him (I like him); Roger stacked his ministerial office with sufficient talent to enable him to fight back against Treasury and Finance Ministry bureaucrats, who were opposed to his Public Choice theory approach.

For the purposes of this epistle, Koro and Roger’s “inside the tent” team, I refer to as, Mandarins.

With a Minister’s Mandarins fighting the Ministry’s Bureaucrats, MPs begin to have a chance.

With Roger, a New Dawn crept over the windowsill and privatization made a few, more wealth than the many.  Like that or not; the point is: Roger’s and his Mandarins defeated the Bureaucrats. Democracy won.

Let’s not get hung up on Rogernomics.  Let’s stick to the script.  Who rules? The MPs or the Bureaucrats?

In my opinion, John Banks and George Hawkins, were two police ministers who were almost totally subservient to the whims of their departmental bureaucrats.   There are other but none in the same category as I would put John and George although Mr. Nash could be a rapidly qualifying contender.

What we don’t need is Ministers who may be seen as dogs wagged by the tail.  What we do need, is Ministers who have the intelligence and confidence in themselves (which may come from advice “inside the tent”), to challenge the wisdom of Bureaucrats.

My approach to matters I have to deal with in business, in NZ and abroad, is that I am smart enough to know that I don’t know everything and so I engage “experts” to give me advice.  Ultimately the call is my judgment, on which I rise of fall. But I have for many years now, engaged, “in the tent experts”.

It may be time for some of our cabinet Ministers to adopt a similar strategy.  Engage inside the tent experts to BALANCE the expert advice they get from their ministry bureaucrats.

Reverting now to the opening stanza of this narrative: GCSB influence on Government policy.

I think we need to be a little concerned about the amount of power and influence the GCSB wields in a field where they (being bureaucrats) think they know best.

My impression of Andrew Little is that he is a hard core Labour man.  A Unionist For the people! Of course, perceptions are often inaccurate; as many are now coming to realize about Ross Meurant.  But I hope not in the case of our current Minister of Spies.

Based on 9 years in the Hallowed Halls and 21 years as cop and the last few years of that service as commissioned officer in charge of Auckland police spies, it is my view that bureaucrats in ministries like Police and GCSB and to a lesser extent Defense, tend to hold view that they alone know what is best for their departments and that means, best for the nation.

Nothing unusual you might say!  Treasury bureaucrats have the same self-perception.  The difference is, the financial strategies promulgated by PhDs in Treasury and Finance are largely predicated on statistical data and mathematical calculations – giving the outcomes more of an objective quality.

Regrettably, Police and GCSB and military bureaucrats (to a lesser extent), don’t in my view, have the same exponential knowledge of their career product, over a reasonably competent MP, as may do a PhD in physics giving advice about the technical implications of nuclear power stations.  Therefore, there is no reason to take what the former category says, as gospel.

Unless challenged, these “subjective test” chaps, would have us at war with Russia and China; deluged with total electronic surveillance of us all; and the unfettered right of police and spies to look into the panty drawers of us all – without warrant.

Bye the way. As I recall, when I was head of police spies, the standing joke was that many of the then GCSB spies were ex cops who had failed their detective courses and scurried off to work for the B team rather than face an ignominious return to the uniform branch.

It’s one thing for PhD in marine science in the Ministry of Fisheries, advocating the limits for a sustainable fisheries policy based on statistical data of dwindling resources, to a Minister who is known to be close to commercial fishers.

It is entirely another thing to have a bureaucrat brought up deep in the forest of police and spy culture, telling a Prime Minister, what is best for NZ.

This latter category of “adviser”, has recently propelled NZ perilously close to being black listed by China as a source of dairy product.    Even one month of “No Dairy to China”, to teach us a lesson about being toadies of America via our Spy Brigade, would be catastrophic for farmers and small-town NZ.

So much for the erudition of the spy bureaucrats deciding what is best for Aotearoa.

Ross Meurant is a former NZ Member of Parliament and before that, an inspector in the police in charge of the Auckland criminal intelligence and VIP security unit.

An international businessman and entrepreneur, today in New Zealand he is trustee and managing director of absentee Russian owned forestry and commercial property.  He is the Honorary Consul for Morocco.

From 2004 he lived and worked in Zimbabwe, Russia, Czech Republic, Thailand and the Balkans. Since 2005 Ross has established business interests in aqua culture and fisheries development – from Morocco to Syria: U.A.E and North Korea. In 2015 Ross was prime speaker on sustainable fisheries as guest of the Moroccan government at CRANZ Montana ‘Sustainable Resources: Africa’ conference, and an official guest at the 2017 forum.

Ross has a bachelor degree in politics and management, a master’s degree in economics, statistics, law and policy and C.O. P’s in law.

Subsequent to parliament, he owned equestrian facilities; was elected to local government as a councilor; consulted to several major fishing companies; was engaged by parliamentary services as adviser to Rt. Hon Winston Peters and emerged as a key figure in the Scampi Affair, which falsely alleged political corruption.

Prior to entering parliament, Ross had been 21 years in the police.  Service included: detective on Regional Crime Squad and on Drug Squad; 5 years Armed Offenders Squad, second in command of the infamous Red Squad, and commissioned officer in charge of police spies i.e. Criminal Intelligence Section and V.I.P. Security.